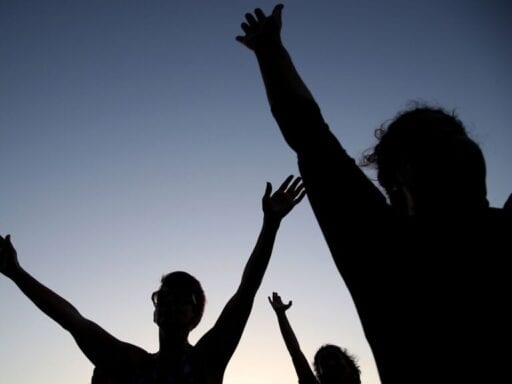 Share
Tweet
Attendees pray during Franklin Graham’s “Decision America” California tour at the Stanislaus County Fairgrounds on May 29, 2018 in Turlock, California. Rev. Franklin Graham is touring California for the weeks leading up to the California primary election on June 5th with a message for evangelicals to vote. | Justin Sullivan/Getty Images

In the editorial, entitled “Trump Should Be Removed from Office,” editor-in-chief Mark Galli, who will retire from the magazine in January, wrote that just as the magazine had argued in 1998, the president of the United States was worthy of impeachment:

… the facts in this instance are unambiguous: The president of the United States attempted to use his political power to coerce a foreign leader to harass and discredit one of the president’s political opponents. That is not only a violation of the Constitution; more importantly, it is profoundly immoral.

To the many evangelicals who continue to support Mr. Trump in spite of his blackened moral record, we might say this: Remember who you are and whom you serve. Consider how your justification of Mr. Trump influences your witness to your Lord and Savior. Consider what an unbelieving world will say if you continue to brush off Mr. Trump’s immoral words and behavior in the cause of political expediency.

The response to the editorial came fast and furious. Trump himself responded on Twitter, calling the magazine a “a far left magazine” and adding, “No President has done more for the Evangelical community, and it’s not even close. You’ll not get anything from those Dems on stage.”

I guess the magazine, “Christianity Today,” is looking for Elizabeth Warren, Bernie Sanders, or those of the socialist/communist bent, to guard their religion. How about Sleepy Joe? The fact is, no President has ever done what I have done for Evangelicals, or religion itself!

And some of Trump’s biggest supporters within the world of evangelical Christianity, including Franklin Graham (son of Billy Graham), voiced their disdain for the editorial, with Graham saying that the publication represented the “elitist liberal wing of evangelicalism.” Polling shows that the support for Trump from white Americans who identify as evangelicals remains high, regardless of his actions.

Why @CTmagazine call for trump removal is unlikely to matter. % of wh evangelicals who agree that elected official can commit immoral act in private life and still behave ethically and fulfill public duties.
2011: 30%
2016: 72% (w/ Trump at top of ticket)
Via @PRRIpoll pic.twitter.com/T1VOPMtxiI

On the left, meanwhile, there was palpable excitement about the possibility of an evangelical institution turning on Trump. But the problem with that point of view is that the publication is not a good representation of the type of evangelical Christians who support Trump. In fact, this wasn’t even the first time the publication criticized Trump.

For many reasons, including the structure of evangelicalism in the United States, it’s not the kind of editorial or event likely to serve as a watershed moment — one where Trump’s supporters within the evangelical community will turn on him.

Christianity Today is “middle of the road”

Christianity Today is an evangelical publication, but one Bill Graham wanted to be, in his words, “middle of the road,” a magazine that would take “the conservative theological position but a definite liberal approach to social issues,” combining the “best in liberalism” and the “best in fundamentalism.” (“Fundamentalism” is a strand of Christian belief that holds that the Bible should be taken literally.) Galli says the magazine writes for “moderate, center-right, and center-left evangelicals.”

I reached out to Galli, and will update if and when I hear back. But in an interview with NPR, Galli said, “It’s not like I have any personal animus against the president. I suspect that if I was in a room with him, we could have a very amiable and delightful conversation. But he does display characteristics that I think, as a leader of a great nation like the United States, are deeply problematic.”

He argued that despite actions on abortion, for example, that Galli supported as a Christian, Trump was becoming like an abusive spouse. “It’s like a wife who has a husband who’s verbally abusive, but he’s still a good provider, he’s still a good father to his children. …When that husband begins to physically abuse the wife and actually become physically dangerous, that doesn’t balance the scale anymore.”

Christianity is a wide-ranging faith with billions of adherents around the world, and about one-fourth of those Christians could be classified as part of the evangelical tradition. But one challenge for both people within evangelical circles and those writing about evangelical Christians is that unlike in other branches of Christianity (say, Roman Catholicism), there are no available “leaders” or authority figures who can determine what believers think or do. There is no Pope of evangelicalism, for example, and no overarching authority that can determine doctrine or specific beliefs. That’s because evangelicals are part of the Protestant tradition, one that holds that Christians don’t need an intermediary (like a priest, for example) to speak directly to God or to have a relationship with Christ.

This is why, when a publication that identifies as evangelical denounces the president, it’s not obvious what that actually means. The evangelical movement in the United States encompasses dozens of individual denominations, from the Southern Baptist Convention to the Pentecostal movement to non-denominational churches and groups. Structures that govern belonging for many faiths (like church attendance, or undergoing specific religious rites like Confirmation or first communion) don’t matter as much for self-identified evangelicals — again, because membership isn’t decided by any outside body or entity.

For example, one of Trump’s religious advisors, Paula White, has been termed a “heretic” by some conservative evangelicals for her outright embrace of the Prosperity Gospel, which as my former colleague Tara Isabella Burton explained, equates faith with financial success. But there is no overarching evangelical authority that could cast White out of the movement (in fact, thousands of people attend her services). And there isn’t one — no person, no official, and no magazine — that could really shift evangelical opinions on Donald Trump.

Evangelical Christians who support Trump do so for many reasons. But some do so largely because they think Democratic alternatives to Trump would be more unfavorable to them. As one Wisconsin evangelical told the Boston Globe, “The tweets and other things are kind of disgusting and embarrassing but I think I look at the bigger picture of what he’s done in the country, because I still think he’s a better choice of what we would have had.”

The American Conservative’s Rod Dreher (who is an Orthodox Christian, not an evangelical) wrote on Friday:

I think all of the Democrats running for president are far more personally decent than the jackass who made fun of Debbie Dingell’s dead husband the other day. But all of them are for keeping it legal to exterminate the unborn, and to compel religious institutions to accept gender ideology. Nope, I’ll take the personally corrupt short-fingered vulgarian, and won’t apologize for it.

Moreover, some Trump-supportive evangelicals believe that at a time when some Americans who lean Republican think that evangelical Christians face more discrimination than Jewish Americans, Trump stands as a protector. Dreher told me earlier this year that Trump is a “kind of katechon — a force that holds back something much worse.” And Pastor Robert Jefress told the Washington Post’s Elizabeth Bruenig earlier this year:

“As a Christian, I believe that regardless of what happens in Washington, DC, that the general trajectory of evangelicalism is going to be downward until Christ returns,” he explained. “If you read the scripture, it’s not: Things get better and better and more evangelical-friendly or Christian-friendly; it is, they get worse and more hostile as the culture does. …I think most Christians I know see the election of Donald Trump as maybe a respite, a pause in that. Perhaps to give Christians the ability and freedom more to share the gospel of Christ with people before the ultimate end occurs and the Lord returns.”

As conservative writer Erick Erickson wrote Friday, while he may agree with the basic arguments the Christianity Today article stated regarding Trump’s impact on evangelicalism, “There are no good alternatives.”