Christianity Today made a moral case that Trump needs to go. He responded by proving its point. 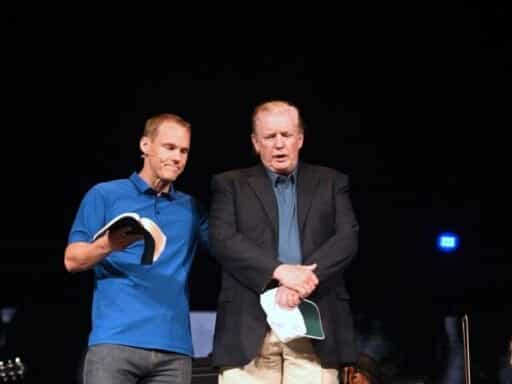 In response to an editorial detailing his moral failings, Trump lashed out in a way that highlighted them.

President Donald Trump’s response to Christianity Today’s moral argument for his removal from office illustrated the very reason the prominent evangelical publication concluded he has to go in the first place.

The morning after the Christian magazine published an editorial written by editor-in-chief Mark Galli, titled, “Trump Should Be Removed from Office,” Trump hit back with tweets that didn’t try to rebut Galli’s reasoning, but instead offered smears and explicitly transactional self-defenses.

Trump began by falsely describing Christianity Today, which has a mainstream audience, as “far-left” and “very ‘progressive.’” (Although it’s true the publication has been critical of Trump for years, that’s very different from being “far-left.”) He claimed, without evidence, that the magazine “has been doing poorly.” He took gratuitous shots at the Democratic presidential candidates, comparing their faith unfavorably with his own — and ignoring the fact that if the Senate removes him from office, Vice President Mike Pence, not a Democrat, will take his place.

Christianity Today “knows nothing about reading a perfect transcript of a routine phone call and would rather have a Radical Left nonbeliever, who wants to take your religion & your guns, than Donald Trump as your President,” Trump tweeted. “No President has done more for the Evangelical community, and it’s not even close. You’ll not get anything from those Dems on stage.”

Trump, who is not known to be a voracious reader, ended his response by getting the initials of the publication wrong.

“I won’t be reading ET again!” he wrote.

….have a Radical Left nonbeliever, who wants to take your religion & your guns, than Donald Trump as your President. No President has done more for the Evangelical community, and it’s not even close. You’ll not get anything from those Dems on stage. I won’t be reading ET again!

Later on Friday, Trump posted another tweet in response to the editorial that not only framed his appeal to evangelicals in explicitly transactional terms but also boasted about his positive impact on “religion itself” in hyperbolic terms. (Trump, of course, infamously called for banning Muslims from entering the US during his campaign.)

I guess the magazine, “Christianity Today,” is looking for Elizabeth Warren, Bernie Sanders, or those of the socialist/communist bent, to guard their religion. How about Sleepy Joe? The fact is, no President has ever done what I have done for Evangelicals, or religion itself!

A short time later, Trump posted yet another tweet dismissing the piece by noting that the late Rev. Billy Graham, who founded Christianity Today, “voted for me in the 2016 Election.”

But had Trump actually read and processed the Christianity Today editorial, he would’ve realized that Galli directly addressed his implied argument that evangelicals have little choice but to tolerate his bad behavior.

Trump’s evangelical supporters have pointed to his Supreme Court nominees, his defense of religious liberty, and his stewardship of the economy, among other things, as achievements that justify their support of the president. … The impeachment hearings have illuminated the president’s moral deficiencies for all to see. This damages the institution of the presidency, damages the reputation of our country, and damages both the spirit and the future of our people. None of the president’s positives can balance the moral and political danger we face under a leader of such grossly immoral character.

And just what “moral deficiencies” does Galli think the impeachment hearings exposed? He wrote that the “unambiguous” facts emerging from the investigation show that Trump “attempted to use his political power to coerce a foreign leader to harass and discredit one of the president’s political opponents. That is not only a violation of the Constitution; more importantly, it is profoundly immoral.”

But Galli’s case goes beyond the specifics of the Ukraine scandal. In fact, he wrote that “the reason many are not shocked” by Trump’s attempt to leverage diplomacy into opposition research for his reelection campaign is because “this president has dumbed down the idea of morality in his administration.”

“He has hired and fired a number of people who are now convicted criminals,” Galli continued. “He himself has admitted to immoral actions in business and his relationship with women, about which he remains proud. His Twitter feed alone — with its habitual string of mischaracterizations, lies, and slanders — is a near-perfect example of a human being who is morally lost and confused.”

But instead of responding with a case that he is not, in fact, “morally lost and confused” — perhaps by pointing out in what specific respects he believes Galli is misunderstanding him, or explaining how his dealings with Ukraine were actually in the national interest — Trump immediately resorted to attacking the messenger and fear-mongering about his political opposition. Ironically, in so doing, he unwittingly made Galli’s point.

Christianity Today’s editorial was published on Thursday, just hours after Trump’s conduct hit another low point at a political rally in Battle Creek, Michigan. During his speech, Trump mocked pro-impeachment Rep. Debbie Dingell (D-MI) by demeaning her dead husband, longtime congressman John Dingell, and joking that he might’ve ended up in hell.

Notably, Trump also framed his beef with Dingell in explicitly transactional terms, suggesting she should’ve been more grateful he didn’t ruin her late husband’s funeral. His attacks seemed to cross a line even for some of his fans at the rally, where audible groans could be heard.

The common strain running through both the Ukraine scandal and Trump’s attacks on Dingell is a transactional sense of right and wrong. If Trump does something that pleases somebody else, they owe him. If they cross him instead of paying him back, he attacks them. Doing the “right” thing is only valuable insofar as it advances Trump’s self-interests.

That might be the way business is done in the rough-and-tumble world of New York City real estate, but the Bible teaches that one of the greatest commandments is to “love your neighbor as yourself.” Then again, despite pretending otherwise, Trump has made it abundantly clear that his grasp of the Bible is tenuous at best.

Trump is a shameless BSer. Listen to him pretend that he’s a big fan of the Bible in this clip when he clearly knows nothing about it. It’s an SNL skit come to life. pic.twitter.com/uGC3Unfgic

During a CNN interview on Friday, Galli — who is set to retire from Christianity Today next month — indicated he has no delusions about the impact (or lack thereof) the editorial will have on the views of Trump’s staunchest backers in the evangelical community, such as Rev. Franklin Graham and Southern Baptist megachurch pastor Robert Jeffress, both of whom have already publicly criticized it.

.@CTmagazine is a dying magazine that has been “Never Trump” from the beginning. They are going against 99% of evangelical Republicans who oppose impeachment. President @realDonaldTrump is the most pro-life, pro-religious liberty, pro-Israel President in history!

“I don’t have any imagination that my editorial is going to shift their views on this matter,” Galli said. “The fact of the matter is Christianity Today is not read by the people, Christians on the far right, by evangelicals on the far right, so they’re going to be as dismissive of the magazine as President Trump has shown to be.”

But in the piece, Galli wrote that evangelicals who continue to support Trump despite his unceasing parade of scandals are at risk of losing whatever moral authority they themselves may have.

“Consider what an unbelieving world will say if you continue to brush off Mr. Trump’s immoral words and behavior in the cause of political expediency,” he wrote. “If we don’t reverse course now, will anyone take anything we say about justice and righteousness with any seriousness for decades to come?”

Live results for the August 11 primaries
India just redefined its citizenship criteria to exclude Muslims
Half the people caught by Border Patrol are now children or families
Threats, leg cramps, no breaks: what Popeyes workers put up with during the Sandwich craze
What a post-Trump Republican Party might look like
Why New Hampshire should not be the first primary, in one chart