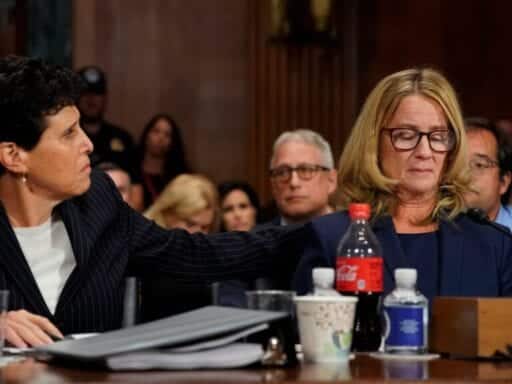 Even in heightened moments, we can never escape the things we buy.

Before Christine Blasey Ford gave her testimony at Supreme Court nominee Brett Kavanaugh’s hearing yesterday morning, she joked that after she delivered her opening statement, she’d need some caffeine. And so when the hearing resumed after lunch, a bottle of Coke was prominently featured in the shot being broadcast to millions of televisions across the country.

As ESPN reporter Darren Rovell pointed out on Twitter, this resulted in a lot of prominent TV screen time for Coca-Cola, which Apex Marketing Group estimated was valued to be $3.14 million worth of advertising dollars. Though this number is very likely flawed — it is quite difficult to accurately measure the value of media coverage — it also ignores the context in which that “free publicity” took place: a woman recounting her sexual assault and answering questions in a trial-like setting at the Supreme Court nomination hearing of her accused attacker.

To be clear, how much Coca-Cola’s margins were affected is certainly not the main question anyone should take away from this truly harrowing event. But it happens all the time: Brands show up in politics, at crime scenes, in controversial moments, divorced from the meticulously crafted and focus-group-approved images presented in advertisements. And even though the companies themselves tend to see negligible effects either way, that certainly isn’t the case for the people affected in the controversies.

Christine Blasey Ford’s Coke bottle somehow wasn’t the first time Coca-Cola was linked to a Supreme Court appointment hearing. At Clarence Thomas’s Senate Judiciary Committee hearing in 1991, Anita Hill, who worked with Thomas at the Department of Education, described an incident in which he was drinking a Coke in his office. Hill said that Thomas “got up from the table at which we were working, went over to his desk to get the Coke, looked at the can and asked, ‘Who has put pubic hair on my Coke?’”

Thomas, was ultimately appointed to the Supreme Court, despite Hill’s testimony. Whether the same will happen with Kavanaugh remains to be seen.

In Ford’s case, however, simply the fact that she was seen drinking it has made Coke political. Some people on Twitter have accused the bottle of being a “prop,” an attempt to bolster the conspiracy theory that Ford is an actress hired by the left in an attempt to sabotage Kavanaugh. One claimed that she was even being told when to drink from it.

Others have urged Coke to capitalize on the moment. Filmmaker Morgan J. Freeman tweeted that “Cola-Cola has a short window to come out in support of Dr. Ford and all sexual assault survivors.” An author, Thrity Umrigar, even threw out an ad campaign suggestion: “If I were a Coca-Cola ad executive I would spend $20 million on an ad campaign with a picture of Dr. Ford at the Senate hearing sipping from her bottle of Coke, with one single word: Courage.”

In all likelihood, however, Coca-Cola — whose most political campaign so far was this year’s Super Bowl ad that featured people singing “America the Beautiful” in a variety of languages — will not. The Kavanaugh hearing is far too divisive to peg an ad campaign to. But Coke is not the only brand that has found itself unwittingly a part of a moment of national significance.

When 95 million people watched the police chase OJ Simpson down a Los Angeles highway in 1994, the fact that the car was a white Ford Bronco was a major part of the narrative.

In that case, it ended up being a boon for the company. According to a USA Today article from 2014, the car chase seemed to boost sales, at least for a while. In 1994 Ford sold more than 37,000 Broncos, an increase of about 7,000 from the year before. Though this didn’t last (Ford discontinued the Bronco in 1996 due to slow sales, a trend that was already underway before the chase), it ended up being positive for the company simply because people were staring at a single Bronco for weeks on end.

“They keep seeing this one on TV over and over again, and at least they’re going to consider it,” explained consumer psychologist Kit Yarrow. “It’s almost shoved into our set of options through constant exposure.”

When Trayvon Martin, the unarmed 17-year-old, was shot and killed in Florida in 2012, he was carrying a pack of Skittles. In the protests that followed, Skittles became a symbol of Martin’s youth, evoking reminders that Martin was still just a child when he was murdered.

In the uncomfortable reality of the situation, you could make the argument that the association ended up being good for Skittles, at least from a sales perspective. A New York Times article from that year explores how even as sales of Skittles rose, the brand itself was anxious about its involvement in the narrative.

Wrigley, which owns Skittles, released a statement that it would be “inappropriate to get involved or comment further as we would never wish for our actions to be perceived as an attempt of commercial gain following this tragedy.” It did not, however, donate its profits to charities that work to prevent things like Martin’s death from happening, as many people had hoped for.

The Times article also draws a comparison to Twinkies, the sugary snack that has since been transformed into a bonafide legal term. In the trial of Dan White for the 1979 murders of Harvey Milk and George Moscone, the defense claimed that because of White’s consumption of junk food before the time of the murders that it was evidence of his diminished mental capacity, which one reporter labeled the “Twinkie defense.”

Another brand name that since turned into a widely used phrase comes from the Jonestown murders. In 1978, cult leader Jim Jones encouraged more than 900 of his followers to commit suicide by drinking a mixture of Flavor Aid and poison; thus the misleading term “drinking the Kool-Aid” was born.

None of these instances, however, appear to have had lasting impact on the brands. Coca-Cola, Ford, Hostess, Kraft Foods, Wrigley — these are enormous companies who will most certainly “be fine.” In most cases, they are reluctant to weigh in at all, surely wary of the consequences of doing so. But their relative health is of zero importance when compared to the controversies they’re so leery of being involved with. They have the luxury of not weighing in, while the people involved — and the millions affected by proxy — do not.

Though it’s uncanny when brand names show up in unexpected places, it’s an inevitable phenomenon. Brands are already inescapable in our day to day lives — they don’t simply go away in situations when the entire world happens to be watching. When they do appear, it’s proof of corporate omnipresence, yes. But it’s also a bizarre reminder that at any moment, our banal, everyday lives could be thrust into a divisive national political conversation. And the stuff we use and consume could go with it.