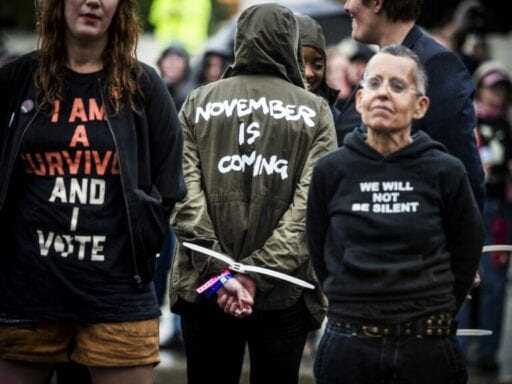 The cost of coming forward with her allegations against Brett Kavanaugh was enormous. But it won’t be in vain.

“Why suffer through the annihilation if it’s not going to matter?”

Christine Blasey Ford said she asked herself that question this summer, when she decided not to come forward publicly to say that Supreme Court nominee Brett Kavanaugh had sexually assaulted her when they were in high school.

She ultimately reversed her decision, speaking to the Washington Post about her allegations (which Kavanaugh denied) and then testifying at a hearing last week. But throughout that process, her question to herself has resonated. After the hearing, Katie McDonough of Jezebel wrote of “the sensation of Ford receding from view — her hours of testimony, another woman publicly reopening wounds out of a sense of responsibility and a fragile belief that it might actually mean something — obliterated by the rage of powerful men.”

“Ford,” McDonough wrote, “had predicted that future and called it by its name: annihilation.”

Ford is a careful speaker. In her testimony before the Senate Judiciary Committee in September, she spoke with the precision of an expert — she is a psychology professor — and the thoroughness of someone who has been forced to go back over her memories again and again and again. It’s significant, then, that she chose the word “annihilation,” and not mockery or stigma or threats or harassment, all things she’s faced in the weeks since she came forward.

Christine Ford was afraid of being reduced to nothing.

Now, after a few days of testimony and investigation, during which survivors took to the streets and the halls of Congress to add their own stories to Ford’s, the Senate voted 50-48 on Saturday to send Brett Kavanaugh to the Supreme Court.

It’s a story that has played out again and again over the past year, as Americans — most of them women — open up about some of the most painful events of their lives in the hopes that maybe, finally, something will change. In this case, the cost has been immense: a woman forced to relive her trauma on a national scale, only to be mocked by the president of the United States. Others have come to lend her support, only to be condemned by senators as bullies or children. Women have bared their souls, and in return have been scoffed at, threatened, insulted, and disbelieved. And now, a man accused of sexual assault has a lifetime appointment to the country’s highest court.

It’s not surprising that Ford feared annihilation. Every day we see high-profile men climbing back to positions of power and influence after a few token months out of the public eye, almost as though women had never come forward to report that those men had groped and hounded, assaulted and abused them. Almost as though those women never existed.

But they do exist. One of the most striking things about the #MeToo movement has been its longevity. In a time when our attention span for news seems as short as the blink of an eye, our national sickness around sexual harassment and assault has come to the fore again and again. This won’t be the last time.

In the last week, Ford and many others have added their voices to a growing chorus of Americans calling those in power to account for the sexual harassment and assault of those less powerful than they are. That chorus is growing louder, not softer. It will not be reduced to nothing.

“I am here today not because I want to be,” Ford said as she began her testimony before the Senate Judiciary Committee. “I am terrified.”

She was right to be afraid. Senators treated her with more respect than the judiciary committee had shown Anita Hill in 1991, mostly ceding questions to Arizona prosecutor Rachel Mitchell, who focused on minutiae. But in the days leading up to the testimony, she and her family were forced to leave their home due to death threats — the home that, Ford testified, she had remodeled with a second front door to help her cope with fears stemming from her assault. Media outlets and congressional staffers began digging through her past, bringing up references to drinking and sex in her high school yearbook in an attempt to discredit her.

After she testified, the digging continued. Then President Donald Trump mocked Ford for being unable to remember certain details in her testimony.

“Where’s the house? I don’t know. Upstairs? Downstairs? Where was it — I don’t know. But I had one beer, that’s the only thing I remember,” he said as a crowd of thousands laughed and cheered.

Trump also appeared to call Ford and her supporters “evil people,” blaming them for leaving Kavanaugh’s life “in tatters.” Later, Trump insulted the assault survivors who had confronted Sen. Jeff Flake (R-AZ) in an elevator after he announced he would vote to advance Kavanaugh’s confirmation out of committee, tweeting, “the very rude elevator screamers are paid professionals only looking to make Senators look bad.”

Meanwhile, Senate Majority Leader Mitch McConnell described assault survivors and others opposing Kavanaugh’s confirmation as bullies who didn’t care about facts: “I want to make it clear to these people who are chasing my members around the hall here or harassing them at the airports or going to their homes, we’re not going to be intimidated by these people. There is no chance in the world they’re going to scare us out of doing our duty.” Sen. Orrin Hatch (R-UT) told a group of protesters to “grow up.”

WATCH: @senorrinhatch tells a group of women and survivors to “grow up” as he laughs in their faces. #BelieveSurvivors pic.twitter.com/ZMe4Rslret

Messages like these are what keep so many women from reporting sexual assault when it happens: They’re justifiably afraid of being smeared, shamed, and disbelieved. For Ford, that happened on a national scale.

This is the cost of #MeToo: A woman had to relive a moment during which, she testified, she feared for her life — a moment that she says has affected her for decades, contributing to symptoms of anxiety and PTSD. And once that was done, she had to submit to public shaming by none other than the president of the United States, and watch her supporters endure the same.

It was a more public version of what too many survivors still have to go through when they report assault or harassment: the shaming, the blame, the disbelief, the character assassination. And, under all of it, the fear that nothing will really change.

The Monday after Ford and Kavanaugh testified before the Senate Judiciary Committee, about 1,000 people were arrested by Capitol Hill police while protesting Kavanaugh, according to organizers. That same day, as Vox’s Tara Golshan reported, women around the country held a national walkout in support of Ford and Deborah Ramirez, who has said that Kavanaugh thrust his genitals in her face without her consent when they were in college. The protests dwarfed those held against the confirmation of Justice Neil Gorsuch, Trump’s first nominee to the court.

Kavanaugh was historically unpopular before Ford’s allegations became public, and many Americans were already protesting his confirmation because of fears that he could cast the deciding vote to overturn Roe v. Wade. But since Ford came forward, the protests have grown in scale and become more personal, as survivors spoke not just about the nominee, but about their own experiences.

“I had not planned to share my story,” wrote Ana María Archila, one of the women who confronted Flake, in an op-ed in USA Today. “I hadn’t shared it for three decades because I wanted to protect my parents from my pain. But Christine Blasey Ford told her story to protect our country and, in solidarity with her and as a way to thank her, I decided to tell mine.”

Archila knew the cost of speaking up about her assault. The potential cost to her family had kept her silent for decades. She had seen what happened to Ford when she agreed to testify. And yet Archila decided to add her voice to Ford’s anyway.

This is the power of #MeToo — it’s baked right into the name. Nearly every time someone has made the difficult decision to open up about harassment or assault, others have been there to say, “We support you. We believe you. It happened to us, too.”

Women who come forward about sexual misconduct have always been at risk of, as Ford put it, annihilation. They have always faced the possibility that their words will be disbelieved, their pain disregarded, their lives upended — that they will be reduced to a mere footnote in a man’s life.

What’s different now is that, more than ever before, Americans are coming together to resist this annihilation. It may be easy to erase one woman — it’s a lot harder to erase thousands.

Ford’s testimony didn’t stop Kavanaugh from being confirmed. But what she started when she agreed to speak to the Washington Post won’t end today. The midterm elections are coming, and with them the possibility that Republicans at all levels of government will have to reckon with the Senate’s vote. More broadly, a time is coming when powerful people and the institutions that support them are no longer insulated, as they once were, from the voices of those whom they’ve assaulted or harassed. That time has been a long time coming — since 1991, at least, if not before that — and maybe it’s not quite here yet. But it’s closer than ever before.

11 questions about sunscreen you should ask before going outside
This profile of publishing’s biggest scam artist reveals the industry’s deep dysfunction
Trump’s executive order on campus anti-Semitism, explained
A Virginia seminary is the first school to create a reparations fund
Exclusive: A new Senate plan would guarantee paychecks for workers who are furloughed or laid off
What we know about the nationwide protests over George Floyd’s death