Christopher Robin is a corporate cash-in, but it fakes sincerity better than most 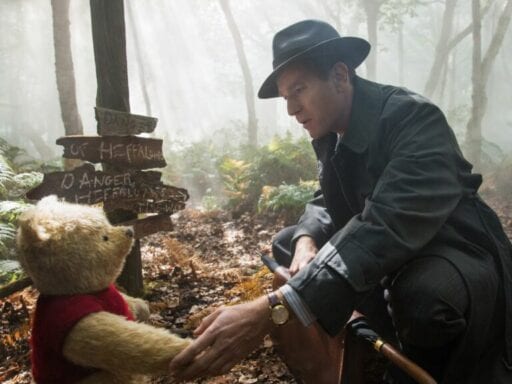 Winnie the Pooh and pals return to give their old friend a pep talk in a movie overshadowed by the company that made it.

Everything there is to know about Christopher Robin can be seen in its first and last images.

I don’t mean the images of the film proper, but of its opening titles and closing credits. The former open with a lovely pencil sketch of the famous Disney castle logo, promising an experience that is hand-crafted and artisan, made to the exact specifications of as many millions of people as can be satisfied. It’s major motion picture as Cracker Barrel Country Store.

The last image, seen if you stay all the way through the Christopher Robin credits — as I did, since I would probably recommend this movie as a pure filmgoing experience — is the gleaming edifice of the modern Disney logo, all faux-bombast and corporate sleekness. This is Disney as we now know it: the monolith from 2001 that brings us not the next stage of human evolution, but rather rigidly enforced family fun.

I say this not to besmirch Christopher Robin, but to bring up something about Disney’s recent string of live-action movies that engage with its hand-drawn animated classics, sometimes outright remaking them. The films often seem to be driven, creatively, by a desire to recreate old Disney movies as works more broadly palatable and more bland to modern sensibilities. They’re simultaneously films in their own right and marginalia commenting on the original works. (See the great Lindsay Ellis for more on this.)

Watching Christopher Robin, then, creates a situation where a relatively engaged viewer might be buying most of what the film is peddling but still actively resisting it, because of how frequently it feels like apologia for the false humility of an entire corporation. The only way to completely and totally enjoy Christopher Robin is to not think about the Disney corporation. Unfortunately, everything about Christopher Robin makes that impossible.

I saw Christopher Robin on the Disney lot, a place I now visit frequently for screenings and other events, but still associate with at least a little bit of wonder. When I get to enter the company’s famed animation building, or walk past one of its famous multiplane cameras, or see some original artwork for one of the company’s animated classics, I still get that little feeling of being 7 years old and obsessed with both the company and (perhaps more importantly) its mythology.

And that feeling still reaches out to kids today. I walked in to the screening behind a young boy — probably 7 or 8 himself — who pointed out the multiplane camera on display in the company’s main office building to his mother, then told her about it by name. How would a kid this young know what a multiplane camera is, unless he had been watching any one of a number of Disney propagandizing featurettes?

This is not a bad thing, to be clear. My childhood love of Disney stuff translated into a lifelong love of film, and the career I have is thanks to the countless hours spent indoctrinating myself in the church of Disney during endless Disney Channel vignettes. Disney sells some silly tropes, and its current attempts to seem corporately woke too often turn into pandering that misses people’s problems with those silly tropes. But if you’re a kid being drawn toward great filmmaking, at least Disney is a company that celebrates its history and tries to get you immersed in some of its finest achievements, not just whatever is out there right now.

But that tendency to self-mythologize also makes Christopher Robin a touch unseemly. Perhaps with a stronger director at the helm, it would have been easier to ignore the way the film often feels like a stealth argument to visit your nearest Disney theme park and experience the wonder of hanging out with versions of all your favorite Disney characters. But while Marc Forster, of Finding Neverland fame, offers a few nice shots, his direction mostly made me wonder why he tried to recreate Terrence Malick’s signature shot of a hand running through long blades of grass or wheat with Winnie the Pooh’s paw.

It feels churlish to talk about Christopher Robin through this lens when it’s surprisingly soulful for a movie that is basically “Hook, but with Winnie the Pooh characters.” It makes a choice, early on, not to be about the real Christopher Milne (son of Pooh writer A.A. Milne) but, instead, about a man literally named Christopher Robin, and then it examines what happens as he’s ripped from his childhood friends, Pooh and Piglet and Tigger and Eeyore (and all the rest).

The movie mostly hand-waves away how the stuffed crew re-enters Christopher’s life — it appears to involve honey, which is appropriate. But I nevertheless liked a lot of its storytelling choices, like turning the Hundred Acre Wood into a place anybody can reach by crawling through the right portal, or letting anybody who happens to see Pooh and his friends realize they can move and talk, something that leads to many of the movie’s best gags.

The narrative is a little lumpy, as though the movie reached its natural climax and then realized it needed to fill out another half-hour. (For lack of a better description, the movie’s last act becomes, in essence, Pooh’s Five. The shift into caper mode is jarring, but the movie surprisingly recovers.) And it’s really too bad that the effervescent Hayley Atwell is reduced to playing “Christopher Robin’s wife, Evelyn Robin,” even if she and Eeyore end up making a surprisingly robust comedy duo.

But Ewan McGregor is so good at acting with characters who aren’t really there, after all those years in the Star Wars prequels, and it’s a treat to see the Pooh characters if you’re of a certain age, by which I mean “if you were ever a kid in the last 50 years.” And the movie is more interested in how hard it is to be alive once you’re an adult than I thought it would be. It takes its time setting up Christopher Robin’s sorrow at what his life has become, but it never overburdens that sorrow. He simply sees living with sadness as his duty.

Christopher Robin was written by three hugely acclaimed screenwriters — Oscar winner Tom McCarthy, Oscar nominee Allison Schroeder, and indie film genius Alex Ross Perry — and its willingness to slow down and examine its characters’ emotions (or, say, Pooh’s sadness at how long Christopher Robin has been away from him) is ultimately what makes it work. I liked that the script didn’t bother too long with having Christopher Robin decide he’d lost his mind when he started seeing Pooh, nor does it belabor anybody else’s reaction to a walking, talking stuffed animal. Pooh and his friends simply exist.

But it’s also hard to ignore how Christopher Robin peddles a nostalgia for itself. The end of the movie is positioned as a victory over thoughtless capitalism, but it involves a slightly more benevolent capitalism triumphing over a slightly greedier capitalism. It is nostalgic for another time and another place, but what it is mostly nostalgic for is an idea of the Disney brand.

There’s a value in that idea — but there’s also a Disney store just down the street that can sell you a stuffed Pooh bear to call your own as soon as you exit the theater.

Richard E. Grant on playing a “Labrador” to Melissa McCarthy’s “porcupine” in their new movie
In Iowa, only 5 percent of Biden supporters are younger than 45
Political trajectories of Graham and Sanford reflect looking-glass GOP
This week in TikTok: The funniest skin care influencer you don’t know yet
Trump’s pitch to evangelical voters, explained in one RNC speech
Two public health crises have collided in the protests over George Floyd’s death