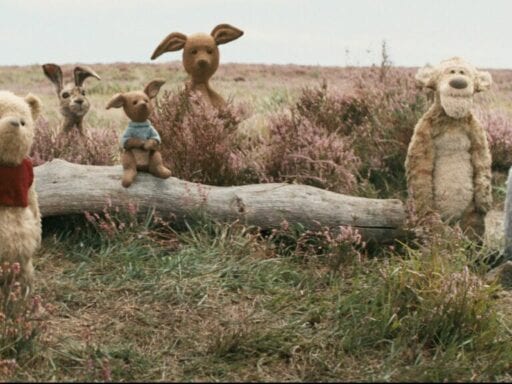 Yes, Christopher Robin has an end credits scene. And it might send you out of the theater on a high.

For big-time Disney fans, the post-credits scene of Christopher Robin will be a real treat.

And, yes, there is a post-credits scene in Christopher Robin, a new movie in which Christopher Robin, the beloved hero of A.A. Milne’s Winnie the Pooh books (and Disney’s animated adaptations of same), is revisited by his stuffed animal pals as an adult. No, it doesn’t involve Pooh being visited by Peter Pan to say he’s setting up a “never let children grow up” initiative, nor does it involve Pooh and his pals discovering a strange wardrobe in the Hundred Acre Wood that opens to a land where it’s always winter but never Christmas.

But it does feature something incredibly charming that might float right over your head if you’re not steeped in Disney lore. And it comes late enough in the credits — after a couple of minutes have transpired — that you might miss it entirely. (I was only waiting around because one of the movie’s press stills hadn’t yet popped up within the movie itself, so I assumed there was more to come.)

So anyway, I’m going to spoil what happens now. It’s not really a spoiler, and in fact, reading about it might make you more likely to see the movie just for a charming little Easter egg that left me in a good mood. But if you really don’t want to know, stop reading.

In this enjoyable little sequence, characters dance together on a beach as an old man at a piano plays a song called (as per the closing credits) “Busy Doing Nothing.” It’s a riff on Pooh’s insistence that sometimes the best thing to do is nothing at all, and it plays off the film’s climax, which involves Christopher Robin (Ewan McGregor), a low-level executive at a luggage company, realizing that what will save the company’s bottom line is selling luggage to lower classes, who deserve to have paid vacations of their very own.

(It is unclear how Christopher Robin extends this policy from his luggage company to all of the United Kingdom, but let’s assume he has tremendous pull with the House of Lords.)

So the beachgoers dance happily along the shore, and the old man tickles the ivories, and finally, the camera pans over to reveal Pooh, Eeyore, Tigger, and Piglet enjoying the sun as well. (This is the press still I kept waiting for.) The scene ends, and the closing credits music transitions into the old man singing a song called “Christopher Robin.”

The scene is a treat in and of itself — those dancers! that music! that seascape! — but it takes on an added poignancy when you know who the man playing the piano and then singing over the credits is. That’s Disney legend Richard M. Sherman, a nine-time Oscar nominee and two-time winner who wrote many of the most memorable songs the Disney corporation ever produced along with his brother, Robert, including all of the songs from the Winnie the Pooh short films. (If you’ve ever sing-muttered, “Up, down, touch the ground” to yourself, you have the Shermans to thank.) Both “Busy Doing Nothing” and “Christopher Robin” are original Richard Sherman compositions for this film.

Among other songs the Shermans wrote are (deep breath): the songs from Mary Poppins, the songs from Snoopy Come Home, the songs from The Jungle Book, the songs from Chitty Chitty Bang Bang, the songs from Charlotte’s Web, and “It’s a Small World.” (Yes, the man playing the piano on the beach at the end of Christopher Robin is partially responsible for one of the most insidious earworms ever created.) And that’s just a small sample size!

Robert Sherman died in 2012, but Richard is still kicking at the age of 90, healthy enough to play the piano for beachgoing stuffed animals, at least. And Disney commemorated the Shermans’ long career and contributions to the company by dedicating one of the soundstages on its Burbank, California, lot to the brothers during the premiere of Christopher Robin.

If you’re a Disney fan, you probably already know Richard M. Sherman’s work, but you might not have known to look for him in that final scene. Seeing him having the time of his life behind the keyboard proves just the right note of poignancy on which to end a movie about the power of nostalgia.

Trump is facing a coronavirus threat. Let’s look back at how he talked about Ebola.
Mike Huckabee criticized for 'bigotry' over Nancy Pelosi tweet of gang members
NBC’s Trial & Error is a joyful break from reality
Why the alt-right loves ancient Rome
Nike has made billions selling rebellion to young people
Lottery winners can’t stay anonymous in most states. Some people are trying to change that.