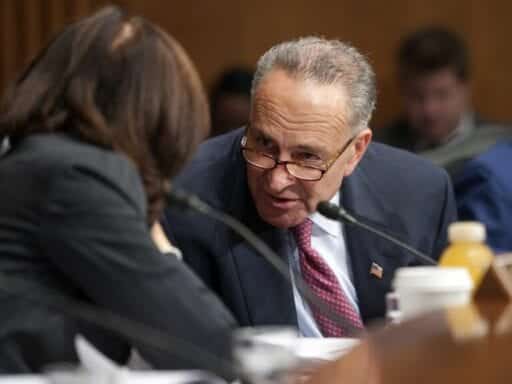 The Senate won’t be back for three weeks. Democrats are scrambling to keep the focus on gun control.

Democrats have a new strategy for keeping gun control at the top of Congress’s agenda: tying it to President Donald Trump’s fixation on his border wall.

Specifically, Senate Minority Leader Chuck Schumer is calling on Trump to redirect $5 billion in funds he’s requested for a wall along the southern border to fund gun control initiatives instead. The administration has requested these funds as part of the annual appropriations process, and Schumer is pushing for the president to change course in the wake of mass shootings in Ohio, California, and Texas in the past month. He’s expected to put in the official ask shortly, according to an aide.

While it’s incredibly unlikely that Trump will comply with this request, Schumer’s move is among the latest efforts from Democrats to keep the legislative spotlight on gun control before Congress returns from recess in September. A White House spokesperson did not immediately respond to a request for comment.

By asking the president to repurpose potential wall money to fund gun control, Schumer hopes to maintain the pressure on both Trump and Republican leaders, so momentum on the subject doesn’t fizzle out like it has so many times in the past. If redirected, these funds could be used for an array of programs including FBI domestic terrorism investigations and the Centers for Disease Control and Prevention’s research on gun violence.

“Republicans and this administration need to put their money where their mouth is when it comes to addressing gun violence and stopping the rise of domestic terrorism, especially stemming from white supremacy,” Schumer said in a statement.

Earlier this month, Democratic leaders including Schumer and House Speaker Nancy Pelosi urged Senate Majority Leader Mitch McConnell to reconvene the upper chamber early in order to consider legislation the House has passed on universal background checks. McConnell refused, though he said the Senate would weigh legislation on the subject when it returned.

Democrats are doing all they can to preserve the focus lawmakers have put on gun control since there are still three weeks before everyone will be back in town. Many have promoted legislation that would guarantee universal background checks for all gun purchases, something that passed the House earlier this year. Lawmakers have also pushed a ban on assault weapons, a more aggressive regulatory effort that few Republicans support.

On the other side of the aisle, McConnell has said the Senate will also consider “red flag” laws, which would prevent individuals who have been identified as a threat to themselves or others from accessing a firearm.

Trump has signaled that he’s supportive of some kind of gun control effort, although it’s unclear what will ultimately materialize. In the past, despite a significant push from Democrats and activists, gun control has faced strong opposition from Republican lawmakers and the National Rifle Association.

Schumer and his fellow Democrats hope that this time, public anger over multiple mass shootings in under two weeks will give them the momentum needed to overcome that reticence. And they hope that by drawing Trump’s attention to the issue by connecting it to something he is very much interested in, lawmakers will still be willing to discuss gun control when their recess is over.

Why school lunches feel like they’re frozen in time
Human rights groups: Immigrant children forced to take drugs
Decoding Melania Trump starts with her clothing
The $5,000 quest for the perfect butt
Trump is already talking about another tax bill
Watching Brooklyn Nine-Nine in the “defund the police” era