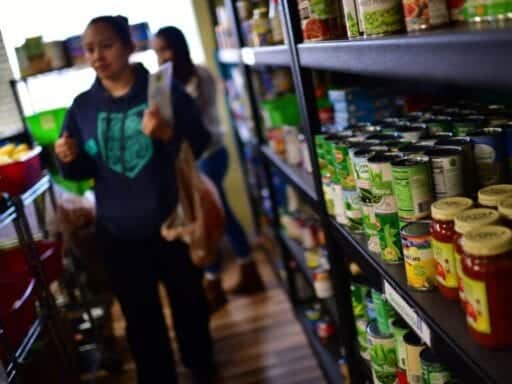 A new Trump administration rule could have stripped 700,000 of access to SNAP.

A federal judge blocked a new Trump administration rule on Friday that would have kicked at least 700,00 people off of food stamps in next month — and she cited the coronavirus pandemic as part of the reason for her ruling.

Despite indications that the outbreak of the novel coronavirus is slowing the global economy and the fact that it has already resulted in job losses, Agriculture Secretary Sonny Perdue declined to delay the implementation of the rule, which tightens work requirements for access to the Supplemental Nutrition Assistance Program (SNAP) among able-bodied people without dependents.

Federal regulations on SNAP benefits have long required “work-eligible” adults meet a 20-hour-a-week work requirement in order to be eligible for the program. But states have long had the ability to waive that requirement, an ability that has proved particularly helpful for individuals living in areas where meeting that work requirement is difficult, if not impossible, due to high unemployment, poor infrastructure, or other issues.

The new Trump rule puts restrictions on states’ ability to issue those waivers, meaning the roughly 700,000 people who currently receive SNAP benefits under the waivers would no longer be eligible to do so.

On Friday, District Court Chief Judge Beryl Howell granted a preliminary injunction against the rule, a measure requested by several Democratic attorneys general, and pointed to the increased social vulnerability caused by coronavirus in her ruling.

“Especially now, as a global pandemic poses widespread health risks, guaranteeing that government officials at both the federal and state levels have flexibility to address the nutritional needs of residents and ensure their well-being through programs like SNAP, is essential,” Howell wrote, according to HuffPost.

It is important to note that injunction does not kill the new rule: It merely means that as the case moves through the court system, the rule cannot take effect.

The rule puts many vulnerable Americans in a rough position

The rule that the Trump administration had been planning on implementing in April is one of a number of the administration’s efforts to make cuts to SNAP.

In February, when it first proposed the rule change, the US Department of Agriculture initially estimated that the new rule would kick 750,000 people off of SNAP. It later revised that number to 688,000 on Wednesday. But those estimates have been contested.

Lauren Bauer, a fellow at the Brookings Institution who specializes on the social safety net, estimated that the number of people losing assistance would be between 1.3 million and 1.5 million people based on her own analysis of the data.

But both analyses were conducted before the effects of the coronavirus and Covid-19, the disease the virus causes, began to rapidly reshape forecasts about the global economy and consumer behavior in the coming months.

As Catherine Kim has written for Vox, there are now even more concerns about cutting programs like SNAP amid fears the coronavirus pandemic will put additional strain on the social safety net:

A growing concern is that those who work in low-wage service industries, particularly bars and restaurants, won’t be able to take on enough shifts, or may even get laid off, as people practice social distancing and avoid going out to eat and drink in crowded areas. Yet without a job, they’ll be unable to stay eligible for SNAP, even though they’ll need the assistance the most during their unemployment, [Georgetown public policy professor Don] Moynihan pointed out.

The work requirement could also force employees to continue going to their public-facing jobs, even when they are sick, because they cannot afford to stay at home when they have little job stability, he added. This could further spread the disease, contrary to what the government wants.

Overall, Moynihan described the government’s plan to move ahead with the rule changes as a “poor choice” driven by conservative aides who have long opposed government assistance programs.

“It certainly seems to be a self-defeating addiction to an ideological agenda,” he said. “You have a group of policymakers in the Trump administration, who really believe that the social safety net is too large, and have been finding a way to reduce it any way that they can. And right now, that priority of cutting the social safety net remains more important for them than helping people and producing economic stimulus at a time of economic downturn.”

Agriculture Secretary Perdue has defended the rule change despite fears over how the coronavirus might affect US employment, pointing to the fact that “good cause” waivers allow people who miss work due to health problems or a disruption in the workplace to remain eligible for SNAP.

But public policy experts like Moynihan have criticized “good cause” waivers as ineffective, arguing they introduce more administrative work and red tape for both individuals and states in a time when bureaucratic resources are spread thin and policy decisions must be made quickly. It’s also unclear whether states would — or even could — consider the coronavirus as meeting “good cause” requirements, since there’s no modern precedent for this kind of public health crisis.

For now, at least, that will remain an open question, due to the injunction. And Democrats celebrated that fact Friday: “Millions rely on SNAP to eat and this ruling is a huge victory for our entire nation,” tweeted New York Attorney General Letitia James’s office.