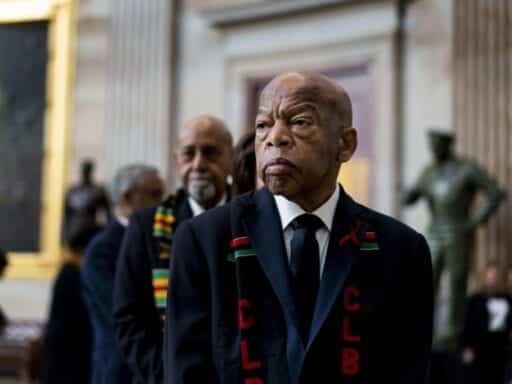 “I have never faced a fight quite like the one I have now,” Lewis said.

Rep. John Lewis of Georgia, a civil rights icon who has served in the House of Representatives for over 30 years and has been referred to as “the conscience of the Congress,” said Sunday that he has stage 4 pancreatic cancer.

Lewis, who first came to national attention in the 1960s as a founder of the Student Nonviolent Coordinating Committee (SNCC), said he is hopeful about the diagnosis, and that he has no plans to retire.

“I have been in some kind of fight — for freedom, equality, basic human rights — for nearly my entire life,” he said. “I have never faced a fight quite like the one I have now.”

The 79-year-old Congress member, who said he’s been told by doctors he has “a fighting chance,” received messages of support from colleagues like former President Barack Obama, who tweeted Sunday, “If there’s one thing I love about Rep. John Lewis, it’s his incomparable will to fight. I know he’s got a lot more of that left in him. Praying for you, my friend.”

If there’s one thing I love about @RepJohnLewis, it’s his incomparable will to fight. I know he’s got a lot more of that left in him. Praying for you, my friend.

In his time in Congress, Lewis has been regarded as a moral center of that body. In recent years, he has become an elder statesman who has tried to hold his colleagues accountable on issues like gun violence (for instance, he led a congressional sit-in calling for gun reform in 2016) and even impeachment, telling lawmakers in a rousing speech this fall that although he had been slow to back an impeachment inquiry, the time had come to launch one, arguing, “to delay or to do otherwise would betray the foundation of our democracy.”

His outspokenness has made him a target for President Donald Trump, who early in his tenure attacked Lewis as being “All talk, talk, talk — no action or results.”

That criticism is of course, not borne out by Lewis’s history.

As a college student, Lewis was a leader in the civil rights movement — he was one of the first Freedom Riders, activists who staged mobile protests on segregated buses across interstate lines; he participated in numerous sit-ins; and worked to register black voters. For these and other civil rights efforts, he was beaten — his skull was cracked by a policeman during the historic “Bloody Sunday” march — and jailed. His protests (including his more recent activist work) have led to more than 40 arrests.

During the 1960s, Lewis also led SNCC and was one of the organizers of the March of Washington, an event at which he delivered an address. After leaving SNCC, he turned his attention to voting rights, focusing on registering minorities to vote, before being called upon by former President Jimmy Carter to lead a federal volunteer agency.

It was that role that led him into politics, beginning with the city council in Atlanta, and then onward to the US House of Representatives.

Any poorer description of Lewis’s career than “no action” is difficult to find.

Lewis has pledged to take the same aggressive approach he has employed in his work to his treatment. Stage 4 pancreatic cancer typically has spread beyond the pancreas and the five-year survival rate for those with that type of of cancer is about 3 percent, according to the American Cancer Society, a reality Lewis has said he is “clear-eyed” about.

“With God’s grace I will be back on the front lines soon,” Lewis said Sunday. “Please keep me in your prayers as I begin this journey.”