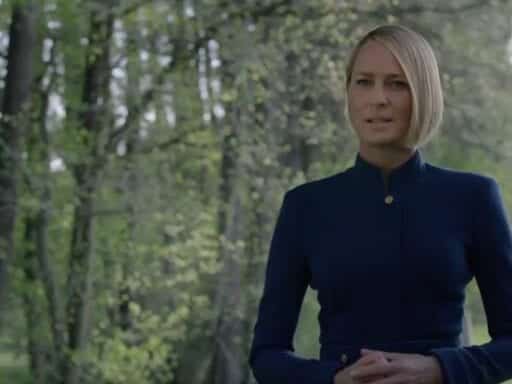 Robin Wright sheds no tears over Kevin Spacey in this blunt preview.

In the wake of the sexual assault allegations against Kevin Spacey, the House of Cards production team struggled with the question of how to move forward without its star. Ultimately, the show made the decision to push ahead and build its sixth and final season around co-star Robin Wright, who plays the devious Claire Underwood, the Lady Macbeth behind Spacey’s political power-monger Frank Underwood.

Now, in a new teaser for the upcoming season, which drops November 2, it’s clear that House of Cards and Netflix are taking the blunt approach: Instead of tiptoeing around the decision to kill off Frank Underwood, the teaser shows Claire standing over his gravestone, delivering a final taunt in his memory — and, crucially, taking over his fourth-wall-breaking narrative to the audience.

You should have known. pic.twitter.com/UFGplyDSY1

The final season of the show will follow Claire as she succeeds her husband to the presidency, moving from first lady to become the nation’s first (fictional) female president.

Claire has always been the show’s most complex character: She’s even more diabolical, cunning, and manipulative than her husband, but she’s also, horrifyingly, just what democracy needs. That puts House of Cards’ last season in a good position to become its most relevant yet.

5 key moments from Donald Trump’s rambling 60 Minutes interview
Roe v. Wade is at risk, but abortion rights groups see surprising opportunities for gains
A top Away executive quit on the same day the startup’s embattled founder said she was returning as ...
The 2019 Victoria’s Secret fashion show has been canceled. It was only a matter of time.
Trump’s coronavirus death toll estimate exposes his failure
How scientists colorize photos of space