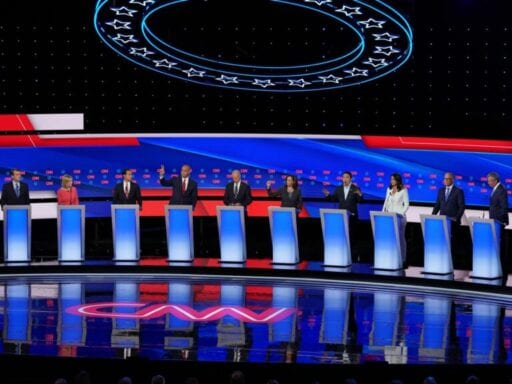 The DNC voted down holding an official presidential climate debate. TV networks have stepped up.

CNN will host a seven-hour marathon of interviews with 10 presidential candidates about climate change on Wednesday beginning at 5 pm Eastern as part of its climate crisis town hall. A live stream of the town hall will air on CNN.com. You can also stream it via CNN apps on iOS, Android, Apple TV, Roku, Amazon Fire, Chromecast, and Android TV. The forum will also be broadcast on SiriusXM Channels 116, 454, 795, and the Westwood One Radio Network.

Here is the format:

The audience will be composed of selected Democrats, independents, and stakeholders. No public tickets will be issued.

That a major television network would devote so much time to a single issue is a sign of how important climate change has become for Democrats and how successful activists have been in elevating the issue.

Climate change has rocketed up the list of concerns for primary voters, with some polls showing climate change as the number one issue and other indicating that strong majorities want robust climate action from the White House. Activists groups like the Sunrise Movement have refused to let the Democratic National Committee ignore the issue, holding sit-ins outside their headquarters to demand a climate debate.

The DNC responded that it will not hold a climate change debate for 2020 presidential contenders, nor will it allow candidates to attend a third-party debate. But CNN and MSNBC have found a loophole in the rules that still permits candidates to attend televised forums and town halls. CNN did not respond to requests for comment. MSNBC’s climate forum is scheduled for September 19 and 20.

In the past few months, candidates have been steadily releasing their own visions for how to limit warming this century. Washington Gov. Jay Inslee, who made climate change the centerpiece of his presidential campaign and put out the most comprehensive policy agenda, is now out of the race, giving other candidates some room to distinguish themselves on the issue. Several candidates, including Booker, Buttigieg, and Harris, are issuing new climate plans this week.

For the most part, the Democratic presidential contenders agree that climate change demands a serious policy response and that the US needs to become carbon neutral by roughly the middle of the century. And indeed many have voiced support for the Green New Deal and most have pledged to refuse donations from the fossil fuel industry. The main differences among the candidates lie in how much political capital they intend to expend on fighting climate change and what they would do with executive authority.

The town hall will give them an opportunity to present their plans in greater detail, and with more nuance. In the prior two rounds of presidential debates spanning more than eight hours, climate change received just 35 minutes of airtime. Much of the discussion was shallow and uninformative, partly a consequence of having to split attention across 20 candidates.

A forum format with one-on-one discussions with the candidates could better get at these distinctions, forcing candidates to make the affirmative case for their own policies rather than sniping at those from other candidates. On the other hand, a candidate in the hot seat won’t receive any direct challenges from their opponents.

It would behoove the networks to focus their discussion on getting at these subtle differences among the candidates, like what executive orders they would sign, how high climate change ranks as a priority, and what measures would a candidate pursue to ensure a just transition to clean energy. (Vox’s David Roberts and I have come up with some questions that could serve as starting points.)

CNN’s climate change forum has immense potential to illuminate real differences among the candidates and inform the public about the often-weedy details of climate policy. However, it remains to be seen if there is an audience with a seven-hour attention span for a single issue. And there’s always the risk that it could devolve into rote recitals of platitudes.

Here’s to hoping we learn something new.

Heat waves can be deadly for workers and will drain the US economy
The Little Stranger is a quietly brilliant tale of pain, grief, and possibly ghosts
What we know about Iran and the threatening “Proud Boys” emails
House Democrats just introduced an ambitious plan to take on prescription drug prices
Almost 90 years after Prohibition, some places are still dry. Why is that?
Former Kentucky Gov. Matt Bevin’s 428 pardons are upsetting both Democrats and Republicans