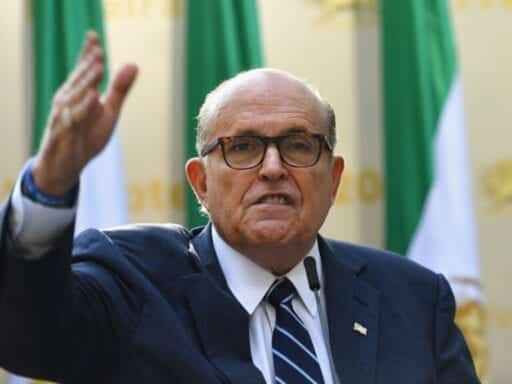 It’s in connection with a probe of his two associates, Lev Parnas and Igor Fruman.

Rudy Giuliani — President Trump’s lawyer and a central figure in the impeachment inquiry threatening the president — is also under scrutiny in a federal investigation of two of his associates, CNN’s Evan Perez, Shimon Prokupecz, and Michael Warren reported Thursday.

According to the CNN team, prosecutors in the US Attorney’s Office for the Southern District of New York “are examining Giuliani’s involvement in the broader flow of money” involving Lev Parnas and Igor Fruman. Parnas and Fruman were arrested on charges of violating campaign finance law Wednesday as they tried to leave the country on one-way tickets.

The news means that, just as President Trump faces political jeopardy from the sprawling Ukraine scandal and House Democrats’ impeachment probe, the president’s personal lawyer — who is at the center of that scandal — is facing legal jeopardy himself.

For months, Parnas and Fruman have worked closely with Giuliani on his effort to get the Ukrainian government to investigate President Trump’s political opponents. The two — who were both born in the Soviet Union but are now US citizens and have been involved in various questionable business ventures — opened doors for Giuliani in Ukraine over the past year. They connected Giuliani with key officials who claimed to have information that could help Trump politically.

So it was a major story when news of Parnas and Fruman’s arrests broke Thursday morning. The indictment focuses on alleged false statements and disclosures made by Parnas and Fruman regarding hundreds of thousands of dollars they donated to Republican groups and candidates in 2018.

The indictment did not mention Giuliani at all, even obliquely, making it unclear whether his conduct was in fact a focus of SDNY’s investigation. But it’s certainly no surprise to learn that he is in fact under scrutiny because there’s long been a mystery about what, exactly, was going on among this trio.

Particularly, it’s been unclear who was paying Giuliani to gallivant around the world in search of dirt that would help Trump. Giuliani has said that Trump does not pay him. He has also referred to Parnas and Fruman as his “clients,” but he has never confirmed whether he was being paid by them. The indictment also alleges that Parnas and Fruman funneled money in from foreign sources to influence US politics and were directly involved in the effort to force out the US Ambassador to Ukraine, Marie Yovanovitch. (Giuliani also took a keen interest in ousting Yovanovitch this year.)

So it would certainly make sense if prosecutors have some questions about what, exactly, was going on with this (in CNN’s words) “flow of money.” And it suggests that SDNY’s investigation could indeed be problematic for Giuliani himself.

The year of bad posts
Oklahoma is releasing 462 inmates in the largest single-day commutation in US history
What poll watchers actually do, and Trump’s troubling rhetoric about them, explained
Retailers are pushing sales before the election
Odd Job: a Q&A series about the weirdest ways people make money
Hurricane season 2018: what scientists are predicting