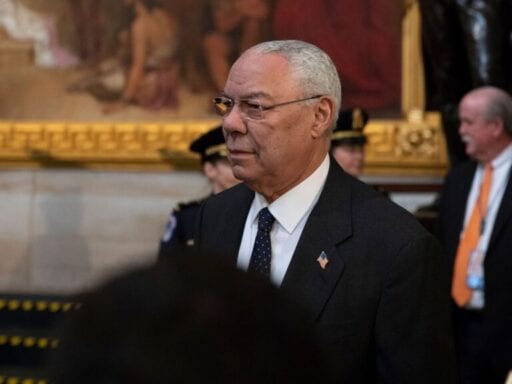 Colin Powell, former secretary of state under Republican President George W. Bush, said Sunday morning that President Donald Trump has “drifted away” from the Constitution and that he’ll be voting for Democratic nominee Joe Biden in the 2020 presidential election.

While the 2020 election would not mark Powell’s first time backing a Democrat for the nation’s highest office (he supported former Secretary of State Hillary Clinton in 2016), his comments are remarkable given that they come as a number of other Republican leaders express hesitation or outright opposition to Trump’s candidacy.

“I think he has been not an effective president. He lies all the time,” Powell told CNN’s Jake Tapper, adding that he’s “close” to Biden and plans to support him.

“Every American citizen has to sit down, think it through, and make a decision on their own,” Powell said. “Use your common sense, say is this good for my country before you say this is good for me.”

Former Secretary of State Colin Powell says he will be voting for former Vice President Joe Biden. “I certainly cannot, in any way, support President Trump this year.” #CNNSOTU pic.twitter.com/jmiUfDPhl1

Powell also said Trump’s response to the anti-police brutality protests show that he has strayed from the principles enshrined in the US Constitution — and added he’s “deeply troubled” by the president’s willingness to attack those who oppose him.

Trump reacted to Powell’s comments with insults Sunday morning, tweeting that Powell is “a real stiff” who led the country into war in the Middle East. He then retweeted JT Lewis, a Republican state Senate candidate in Connecticut, who wrote that “retired bureaucrats” hate Trump because he’s “ending the corruption that pads their retirement accounts!”

Colin Powell, a real stiff who was very responsible for getting us into the disastrous Middle East Wars, just announced he will be voting for another stiff, Sleepy Joe Biden. Didn’t Powell say that Iraq had “weapons of mass destruction?” They didn’t, but off we went to WAR!

Sunday is not the first time Powell has publicly criticized Trump — he said he voted for Clinton in 2016 and called Trump “a national disgrace and an international pariah” in emails leaked that year. But in speaking out now, he joins a number of other prominent Republicans who are reportedly unhappy with the leader of their party.

NBC’s Kelly O’Donnell reports an aide to former President Bush has pushed back on this reporting, calling it “completely made up.” The aide added, “President Bush is retired from presidential politics and hasn’t indicated how he will vote.”

Regardless, it seems unlikely Bush would support Trump in his campaign: None of these figures supported Trump in 2016, but some of those who did — including former Speakers of the House Paul Ryan and John Boehner — have not actively endorsed the president’s re-election bid.

The Biden campaign reportedly sees enough of an opportunity with these and grassroots Republicans that it even plans to launch a “Republicans for Biden” group later in the campaign, Democrats close to the campaign told the Times.

And it is not only Republicans who are criticizing the president. A number of elite military officials — who usually work to remain nonpartisan — have also criticized Trump in recent days over his response to protests against racism and police brutality that have occurred in cities across the country. Some of his controversial moves include reportedly calling for 10,000 active duty service members to deploy to stop them, and using US Park Police and other law enforcement officials to tear-gas peaceful protesters to make way for Trump to take a photo in front of a nearby church.

Former Defense Secretary Jim Mattis, who resigned from his post in the Trump administration in 2018 over the president’s Syria policy and remains widely respected on both sides of the aisle, released an excoriating statement earlier this week.

“Donald Trump is the first president in my lifetime who does not try to unite the American people — does not even pretend to try,” Mattis wrote. “We can unite without him, drawing on the strengths inherent in our civil society. This will not be easy, as the past few days have shown, but we owe it to our fellow citizens; to past generations that bled to defend our promise; and to our children.”

And Gen. John Allen, the former commander of US troops in Afghanistan, penned an op-ed in Foreign Policy, writing that Trump “has failed to show sympathy, empathy, compassion, or understanding (for those protesting racial injustice)—some of the traits the nation now needs from its highest office.”

How widespread the sentiments of Powell, top Republicans, and some military leaders are will be revealed in the fall; polling, however, shows Biden has held a slight advantage over Trump for months, one that’s been rising in the weeks since nationwide anti-racism protests arose after the killing of George Floyd in Minneapolis on May 25.