Collins and Murkowski are pivotal votes in the Supreme Court fight. Here are their reactions to Brett Kavanaugh. 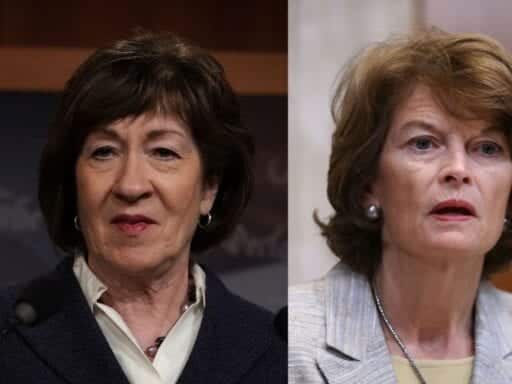 All eyes are on Sens. Susan Collins (R-ME) and Lisa Murkowski (R-AK) after President Donald Trump’s nomination of Brett Kavanaugh for Supreme Court Justice on Monday. Given their pro-abortion rights stances and their votes against the repeal of the Affordable Care Act last year, Collins and Murkowski are widely seen as moderate Republicans who could help Democrats gain the votes they need to stonewall his nomination.

But their initial comments in response to the nominee — which emphasize the need to carefully review his body of work — do little to shed light on how they ultimately plan to vote.

With Sen. John McCain’s (R-AZ) current absence, Democrats would only need one more Republican vote to block the Supreme Court nominee if the entire caucus votes together (something that is by no means guaranteed).

Collins and Murkowski’s opposition, however, is anything but certain. Both lawmakers voted in support of conservative justice Neil Gorsuch in 2017, and had thus far avoided staking out a clear position on a new prospect. According to a FiveThirtyEight analysis, both lawmakers have voted in line with Trump positions around 80 percent of the time.

Both senators were invited to the Supreme Court announcement on Monday evening, but declined to attend. They indicated in their statements that they are looking forward to their individual meetings with Kavanaugh.

“Judge Kavanaugh has impressive credentials and extensive experience, having served more than a decade on the D.C. Circuit Court of Appeals,” Collins said in a statement. “I will conduct a careful, thorough vetting of the President’s nominee to the Supreme Court, as I have done with the five previous Supreme Court Justices whom I have considered. I look forward to Judge Kavanaugh’s public hearing before the Senate Judiciary Committee and to questioning him in a meeting in my office.”

Murkowski also signaled that she was looking forward to gauging his views and experience directly. “While I have not met Judge Kavanaugh, I look forward to sitting down for a personal meeting with him,” she said in a statement. “I intend to review Judge Kavanaugh’s decisions on the bench and writings off the bench, and pay careful attention to his responses to questions posed by my colleagues on the Senate Judiciary Committee.”

Murkowski added that she would look toward the American Bar Association’s analysis of Kavanaugh for guidance as part of her decision. “The American Bar Association’s Standing Committee on the Judiciary will also review Judge Kavanaugh’s qualifications prior to these hearings and issue a rating,” she said, noting that her standard for reviewing nominees “remains rigorous and exacting.”

“I intend to carefully consider that rating, the information obtained through personal meetings, my own review of Judge Kavanaugh’s qualifications and record, and the views of Alaskans in determining whether or not to support him,” Murkowski noted.

Collins’s previous statements about abortion have sent some mixed signals about how she’ll approach this nomination. She has said that she would not support any candidate who is hostile toward the 1973 landmark Roe v. Wade court decision, but expressed skepticism that Gorsuch or Chief Justice John Roberts would overturn Roe, based on what she described as their commitment to backing precedent.

In a New York Times op-ed, Senate Minority Leader Chuck Schumer pushed back against that idea, noting that both justices had no issue overturning a 41-year-old precedent in their recent Janus v. AFSCME decision.

Murkowski, meanwhile, has held her cards a bit closer to the chest.

To sway the two women, Democrats are hoping to spur grassroots pressure driven by concerns about preserving Roe v. Wade and protecting the ACA. They believe that constituent outcry — which was a key reason both lawmakers voted to save the ACA last year — could help produce a similar outcome this time around.

Although Collins and Murkowski supported Gorsuch, there’s a sense that this vote could be different because there are a series of existential threats to both abortion rights and health care winding their way through the courts — making the new justice pick a seemingly even more pivotal one. As Sen. Chris Murphy (D-CT) told the New York Times, “Very few people in the Senate, even those who’ve been here for a long time, will cast a more important vote than this.”

According to a Politico report, however, both senators have said they don’t view this vote as more crucial than any of their previous ones.

The Democratic establishment sees its issue-driven approach as a substantive and compelling way to build consensus among a wide group of lawmakers with disparate interests. As Schumer writes in his op-ed, “While the number of Democrats in the Senate is not a majority, the number of senators who believe in protections for those with pre-existing conditions and women’s reproductive rights is.”

When it comes to voting on a Supreme Court Justice, however, it remains to be seen how rock solid that “majority” really is.

Did Trump commit bribery? I asked 7 legal experts.
What we know about a shooting, stabbing, and fire in Honolulu, Hawaii
Why the government is investigating Apple, Amazon, Google, and Facebook for antitrust — but not Mic...
Trump’s new trade deal with South Korea won’t boost US car sales
Here’s when the polls close in every state
Tech underestimated Bernie Sanders. Now it has to deal with him.