Collins and Murkowski keep Republicans — and Democrats — guessing on Kavanaugh 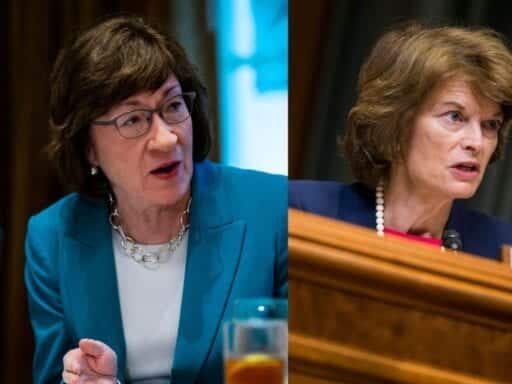 All eyes are still on the two moderates.

Republican Sens. Susan Collins (ME) and Lisa Murkowski (AK) — two lawmakers who could be pivotal swing votes in the fight over Supreme Court pick Brett Kavanaugh — are taking their time evaluating the nominee. While Kavanaugh has now met with more than 20 Republican senators — and even has a sit-down lined up with Democrat Joe Manchin (WV) — neither Collins or Murkowski has an appointment on the books just yet.

Collins on Tuesday told reporters that she was still reviewing Kavanaugh’s extensive archive of writings before setting a date for a meeting.

“It’s not going to be any time immediately because I still have a ton of work to do on his decisions, his law review articles, a lot of others,” she said. “I’m still going through his very voluminous 300 decisions and speeches before AEI, for example. There’s a very interesting speech he gave there.”

In the September AEI speech that Collins referenced, Kavanaugh expressed effusive admiration for the work of former Chief Justice William Rehnquist — including his dissent in the landmark Roe v. Wade decision that guaranteed a woman’s right to an abortion. As Drexel University law professor David Cohen told the Los Angeles Times, Kavanaugh refrained from expressing outright affirmation of the dissent, but his speech makes it “pretty clear he agrees with Rehnquist.”

Collins has said she would not support a candidate hostile to Roe, but also noted that she believes Justices Neil Gorsuch and John Roberts would respect existing precedent on the matter. Her mention of the AEI speech suggests that Kavanaugh’s take on Roe could potentially be a point of concern, after all. (To be clear, Roe wasn’t the only case he addressed in that speech. Kavanaugh also lauded Rehnquist’s opinions related to religion and police procedure.)

Murkowski is also known for her pro-abortion rights stance, though she has held her cards a bit closer to the chest. Both senators’ initial reactions toward Kavanaugh’s nomination didn’t seem to suggest an inclination toward blocking him.

Democratic leadership has emphasized the potential threat that Kavanaugh could pose to abortion rights as one of the arguments that could sway Collins and Murkowski. Senate Minority Leader Chuck Schumer has argued that his vetting by the Federalist Society — a conservative organization led by a well-known anti-abortion rights advocate — should be reason enough for concern.

Kavanaugh’s record on abortion is a bit tough to parse, however. During his 2006 confirmation hearing for the DC Circuit, he said he would be committed to following the precedent established by Roe “faithfully and fully,” but declined to offer his personal views on the case. More recently in 2017, he dissented in a decision that enabled an undocumented teenager to temporarily leave federal custody to obtain an abortion. His dissent centered more on the timing of the abortion, however, than the woman’s right to it.

“I don’t think his [personal views on Roe v. Wade] are relevant,” Collins reiterated on Tuesday. “After all, the whole point of a judge is to be able to put aside personal views and preferences and instead render an impartial decision.”

As HuffPost highlighted, constituents in both Collins’s and Murkowski’s states overwhelmingly support Roe v. Wade and pressure from them could force the two lawmakers to consider a more pointed opposition toward Kavanaugh. Collins said she’s paying close attention to what constituents have to say, but was dismissive of outside groups attempting to influence her opinion.

“There’s like a $3 million media buy, which is huge in my state — so you can’t turn on the television, or the radio, or go on the internet without seeing ads,” she said. “I’m very interested in what my constituents think, but media campaigns from outside groups are going to have absolutely no influence on my vote.”

Why people are getting evicted for calling 911
Morning Brew, the business newsletter publisher for millennials, is in talks to sell itself to Busin...
Close the bars. Reopen the schools.
How the US counts votes
Julián Castro ends his presidential bid
How the Save the Rainforest movement gave rise to modern environmentalism