Collins was supposed to be different 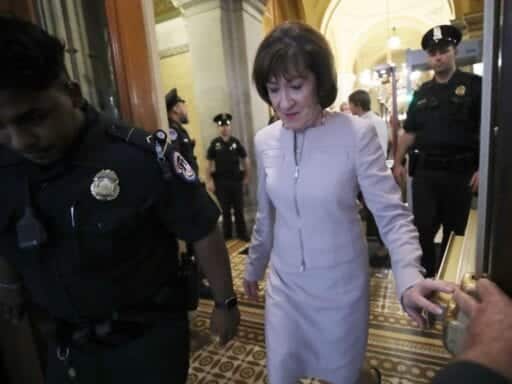 But in her speech announcing that she’d vote to confirm Supreme Court nominee Brett Kavanaugh, she ended up sounding like Trump.

On Friday, many Americans had pinned their hopes on Susan Collins.

Seen as a crucial swing vote on Brett Kavanaugh’s nomination ever since President Trump nominated him to the Supreme Court, she only became more pivotal after Christine Blasey Ford stated publicly that Kavanaugh had assaulted her when both were in high school. She became “the most sought-after senator in Washington,” as Vox’s Dylan Scott put it, meeting with multiple sexual assault survivors as she weighed her final decision on Kavanaugh.

It was never particularly fair, as Scott also noted, to put the burden of accepting or rejecting Kavanaugh on Collins, when dozens of her Republican male colleagues had already made their intentions clear. As it turned out, though, Collins wasn’t different anyway — in her speech Friday announcing her intention to vote yes on Kavanaugh, she espoused the same arguments that right-wing men, including President Trump, have been using for days to explain away Ford’s testimony and defend Kavanaugh.

Ever since Christine Blasey Ford came forward to publicly state that Brett Kavanaugh sexually assaulted her when they were in high school, Kavanaugh’s defenders have argued that he is entitled to due process — to be presumed innocent until proven guilty — never mind that he’s not on trial and that all he stands to lose as a result of the Senate’s decision is a chance at a job that the vast majority of Americans would never dream of holding.

Collins said she appreciated that the Senate was not a criminal court, but argued that “in evaluating any given claim of misconduct, we will be ill-served in the long run if we abandon the presumption of innocence and fairness, tempting though it may be.”

When it came to Kavanaugh’s accusers, though, many of those defending him abandoned the idea of the presumption of innocence. Those who doubted Ford and others accusing Kavanaugh of sexual misconduct didn’t just argue that their cases couldn’t be proved beyond a reasonable doubt — they insinuated, or stated outright, that these accusers were contemptible liars.

Unlike Trump, Collins avoided smearing Ford. “I believe that she is a survivor of a sexual assault and that this trauma has upended her life,” she said.

But when it came to Julie Swetnick, who has said that she attended parties where Kavanaugh and his friend Mark Judge plotted to drug and rape girls, Collins abandoned her restraint.

“This outlandish allegation was put forth without any credible supporting evidence and simply parroted public statements of others,” Collins concluded. “That such an allegation can find its way into the Supreme Court confirmation process is a stark reminder about why the presumption of innocence is so ingrained in our American consciousness.”

Many have cast doubt on Swetnick’s allegations because they came through attorney Michael Avenatti, who has discussed a run for president in 2020 and has a reputation for seeking the limelight. But there’s a difference between subjecting Swetnick’s claims to scrutiny and arguing that they are “outlandish” and have no place in the confirmation process.

Sadly, there’s nothing outlandish about boys or men drugging and raping women, and Swetnick’s claims were in fact right in line with the picture Ford and Deborah Ramirez had painted of Kavanaugh harming women for the amusement of other men. Lili Loofbourow at Slate called it “toxic homosociality.”

“Indelible in the hippocampus is the laughter,” Ford said during her testimony. “The uproarious laughter between the two, and their having fun at my expense.”

Collins could have demanded an investigation of Swetnick’s claims with this in mind. She could have refused to vote to confirm Kavanaugh until such an investigation was completed. Instead, she appears to have presumed Swetnick guilty of lying and then used that presumption to cast doubt on all opposition to Kavanaugh.

This is handy logic, which allows allegations made by women to cancel each other out rather than support each other. If one is hearsay, they all are.

It wasn’t fair to hold Collins responsible for stopping Kavanaugh’s confirmation just because she’s a woman. It was fair to expect her to live up to her reputation as an independent thinker who makes her own decisions. Instead, she seems to have subscribed to the same fallacies as all those who have been defending Kavanaugh in recent days by attacking the women who accused him.