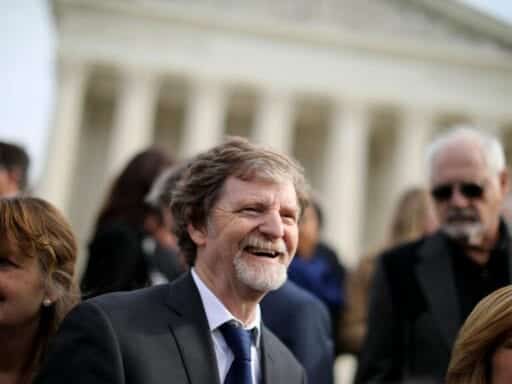 The Colorado baker who earlier this year won a Supreme Court case over whether he can refuse service for same-sex weddings is suing the state again. But this time, Masterpiece Cakeshop owner Jack Phillips is arguing that Colorado officials violated his religious rights by pushing him to bake a cake for a transgender woman.

In June 2017, Autumn Scardina, a transgender lawyer, requested cake with a pink-and-blue design to celebrate her birthday and her anniversary of coming out as trans. According to NPR, she was told that Masterpiece does not make cakes that celebrate gender transitions. She sued, and Colorado officials in June of this year said there was “sufficient evidence” for her discrimination claim and directed her and Masterpiece Cakeshop to “compulsory mediation.”

Phillips has publicly contested the decision. “I know the Bible says that God created male and female and that we don’t get to choose that,” he told Colorado Public Radio. “And I don’t feel like the government has a right to compel me to participate in creating a cake that promotes that message.”

Phillips won his Supreme Court case earlier this year dealing with another instance, from 2012, in which he and Masterpiece Cakeshop refused to bake a cake for a same-sex couple’s wedding reception. But the ruling in that case was narrow; rather than deciding that Phillips’s religious beliefs empowered him to bypass Colorado anti-discrimination law and discriminate against gay people, the ruling focused on how the Colorado government had treated Phillips — unfairly, in the Supreme Court justices’ view.

Justice Anthony Kennedy, who wrote the majority opinion, made the narrow scope of the ruling explicit in his decision: “The outcome of cases like this in other circumstances must await further elaboration in the courts, all in the context of recognizing that these disputes must be resolved with tolerance, without undue disrespect to sincere religious beliefs, and without subjecting gay persons to indignities when they seek goods and services in an open market.”

The narrow ruling makes it unclear just how Phillips would fare if his latest claim reached the Supreme Court. But with Kennedy retiring and the Supreme Court expected to become even more conservative, Phillips’s chances seem good (for him).

Colorado is in the minority of states that explicitly prohibit discrimination based on sexual orientation and gender identity.

Advocates argue that federal law banning discrimination based on sex should protect LGBTQ people, because discrimination against a person’s sexual orientation or gender identity is fundamentally rooted in sex-based expectations. But the US Supreme Court hasn’t embraced the claim, leaving the issue to a patchwork of lower court decisions.

So in most states, Phillips’s refusal to serve LGBTQ people in different instances may not even require a religious exemption. He could, at least under most states’ laws as written today, be allowed to discriminate against LGBTQ people as he wishes.