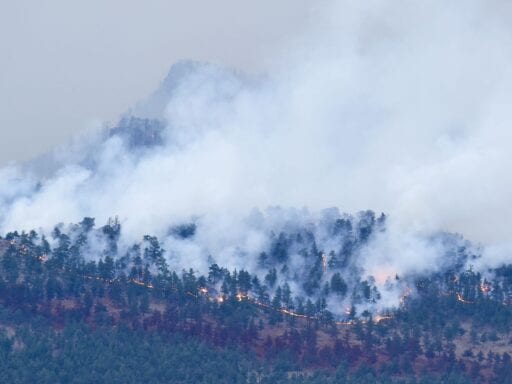 Three of the four largest fires in Colorado history ignited since July.

The Cameron Peak Fire near Rocky Mountain National Park has become the largest wildfire in Colorado history, growing to almost 207,000 acres this week. The fire was 55 percent contained as of Wednesday afternoon.

It was quickly joined this week by the East Troublesome Fire to its southwest. Over a period of 24 hours, the East Troublesome Fire grew six times in size to more than 125,000 acres as of Thursday. The blaze, which is burning at an elevation of 9,000 feet and across both sides of the continental divide, forced Rocky Mountain National Park to close. It’s now the fourth-largest fire in Colorado history.

The previous record-holder before Cameron Peak was the 137,000-acre Pine Gulch Fire near Grand Junction, Colorado. That fire also ignited this year and was declared 100 percent contained in September. It only held on to its record as Colorado’s largest wildfire for seven weeks. Three of the four largest wildfires in state history have ignited just since July.

Yet another fast-moving wildfire ignited in Boulder County on Saturday and quickly spread across almost 10,000 acres, forcing at least 3,000 people to evacuate. Known as the CalWood Fire, it’s now the largest wildfire on record for Boulder County. Then on Sunday, the Lefthand Canyon Fire started just outside of Boulder.

Beyond the threat from the flames, these various wildfires have sent dangerous, smoky air into cities like Denver and Fort Collins, triggering air quality alerts off and on for months.

Together, the recent blazes in Colorado add up to an unusually long, late, and severe wildfire season, and it’s not likely to let up anytime soon. “The current fire season, it’s definitely a crazy one,” said Chad Hoffman, an associate professor of fire science at Colorado State University. “We still have dry, windy conditions pushing these fires.”

Some unique weather conditions this year set the stage for Colorado’s blazes, but the threat from wildfires is growing across the state due to human development and climate change.

It’s an increasingly familiar story. Like the epic wildfires this year across California, Oregon, and Washington, the wildfires in Colorado arose amid a year of extreme heat and dryness.

Heat waves baked the state this summer and persisted into the fall. The high temperatures increased the evaporation of moisture from vegetation, leaving plants dry and ready to burn. There was also less rainfall. Over the past month, precipitation was less than 10 percent of what is typical.

“By the end of September, nearly 100% of the state was experiencing some level of drought, up from 51% since the beginning of the calendar year,” according to the Colorado Climate Center’s Monthly State of the Climate report. The state is on track to have its second-driest year on record.

That aridity has left almost every type of vegetation in the state primed to burn, as was evident in the Cameron Peak Fire. “It burned all the way from fir forest, ponderosa pine, mixed conifer. It’s burned through some grasslands and shrublands as well,” Hoffman said. “It’s burned through areas that have previously burned, like during the Bobcat Fire. It’s burned through bark-beetle-affected areas. So a really big mix of fuels that this fire has burned through over the last 60 days.”

This afternoon’s view of widespread wildfire activity in the Colorado Rockies.

This includes the large hot spot of the #EastTroublesomeFire. pic.twitter.com/6uUBB5A21Z

It’s also uncommon to see fires this late in the year in Colorado. Typically winter precipitation starts to set in and cap fire seasons in the autumn.

This fits within the trend of fire seasons in Colorado getting longer. Wildfires are a natural part of the landscape in the state, as they are in places farther west. Many woodlands have evolved to deal with and benefit from periodic fires.

However, humans have been making fire risks worse. That’s in part due to climate change, which is changing weather patterns and driving some of the aridity in Colorado’s forests.

“Our 2020 wildfire season is showing us that climate change is here and now in Colorado,” said Jennifer Balch, director of the Earth Lab and an associate professor of geography at the University of Colorado Boulder, in an email. “Warming is setting the stage for a lot of burning across an extended fire season.”

In particular, there has been a growth in late-season fires in Colorado. The area burned by October fires over the past decade has tripled compared to the area burned between 1980 and 2000. “We do see fall fire events in Colorado, related to fast, downslope winds. But to see multiple events start this late, in the middle of October, is very rare,” Balch said.

It’s also a function of more people living in high-risk areas. “The growing population in Colorado means we have more people in the woods, which leads potentially to more ignitions,” Hoffman said. The vast majority of wildfires in the United States have human causes, though in Colorado about half of fires in the state are ignited by lightning strikes.

The growing fire risk is also a consequence of more than a century of suppression of natural wildfires. By putting out blazes, vegetation in the state has accumulated, so during periods of extreme dryness, there is much more fuel to burn than there would be had more fires been allowed to proceed.

There are now efforts to reintroduce fire to the landscape, but vast swaths of the state need fuel reduction treatments, and the window for safely conducting measures like prescribed burns is shrinking as the climate warms.

This video gives a quick look into the types of wind conditions us and other firefighters on Cameron Peak experienced and have been experiencing over the duration of the #cameronpeakfire #cofire pic.twitter.com/8WDfE1reTc

“We love our beautiful mountain landscapes to live and to recreate,” Balch said. “But these beautiful landscapes are also flammable, and more flammable with climate change. We need proactive solutions that manage our fuels in places where it matters most for ecosystems and people.”