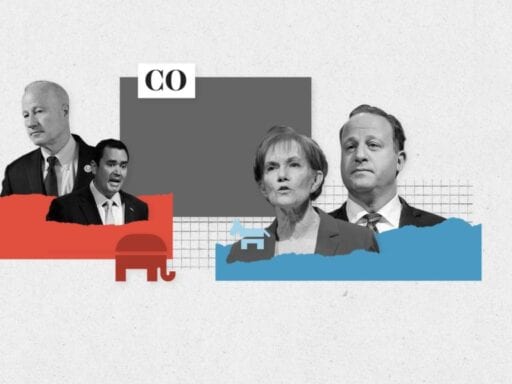 An open governor’s seat and a vulnerable Republican House seat.

Colorado primary voters go to the polls Tuesday to pick nominees the open race for the state’s governors’ mansion, as well as a heated contest to oust an embattled Republican running in a district Hillary Clinton won in 2016.

With Gov. John Hickenlooper term-limited out, Democrats and Republicans will be setting up the race for his successor in November. In addition, there’s an important primary to identify Republican Rep. Mike Coffman’s Democratic challenger Colorado’s 6th Congressional District, where there have been several mass shootings in recent years.

Polls close at 7 pm Mountain Time. Vox will have live results below, powered by Decision Desk.

With incumbent Democratic Gov. John Hickenlooper term-limited out, there are competitive Republican and Democratic races to succeed him. This is also the first year that Colorado’s independent voters will be allowed to cast ballots in the Democratic and Republican primaries, which could make the contests more competitive than they’ve been in the past.

As for the Republicans, Colorado state treasurer Walker Stapleton, former state Rep. Victor Mitchell, former Mayor of Parker Greg Lopez, and business executive Doug Robinson. Stapleton seems to be the frontrunner in the Republican primary, where the issues have mostly been focused on keeping taxes low and trying to prevent Democrats from enacting single-payer health care in the state. (There have been past attempts, but they’ve failed.)

But the Democratic field is the one to watch, as Colorado tends to elect Democratic governors. Rep. Jared Polis, Lt. Gov. Donna Lynne, former state Sen. Michael Johnston, and former state treasurer Cary Kennedy are all in the running. Polis, a five-term Congress member, might be the most well-known nationally, but he’s facing a competitive field of well-known candidates in Colorado. Kennedy, for example, has a lot of grassroots support.

Democrats see an opportunity to flip this district blue this year because Hillary Clinton won it in 2016. Rep. Mike Coffman has been around since 2009, but the state and district are both diversifying and turning more blue, so he’s vulnerable. Expect Democrats to go after Coffman’s vote to repeal the Affordable Care Act and his donations from the NRA leading up to November. (CO-6 and the area around it have seen numerous mass shootings over the years.)

Attorney and Army veteran Jason Crow and former Obama administration official Levi Tillemann are in the race. Crow has the backing of national Democrats; he’s been on the DCCC’s Red to Blue list for months. Tillemann made news a few months back by leaking a secretly recorded conversation he had with House Minority Whip Steny Hoyer (D-MD) in which Hoyer encouraged him to drop out of the race. A few months later, Tillemann released a campaign ad in which he literally pepper-sprayed himself in the face to make a point about gun control measures.

Is it immoral if you feel schadenfreude about Trump’s Covid-19?
The many ways Muslim prisoners are denied religious rights in prison
The US government is suing Google over anticompetitive practices
Barack Obama endorses Joe Biden for president
The silent “sixth” sense
Here are some goats wreaking havoc on a Boise neighborhood