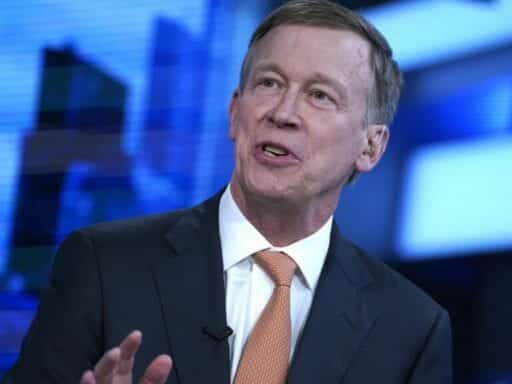 Hickenlooper ditched presidential ambitions for a Senate bid in an increasingly Democratic Colorado.

Colorado’s John Hickenlooper has ditched his presidential ambitions to run for Senate — a campaign he announced Thursday — and he’s already the favorite to win the Democratic nomination.

He’s received support from presidential candidates like Sens. Kamala Harris (D-CA) and Tim Kaine (D-VA), and Colorado lawmakers who think he’s best positioned to unseat Republican incumbent Cory Gardner. He has by far the most name recognition in the race as a two-term governor and Denver’s former mayor.

“I’ve always said Washington was a lousy place for a guy like me who wants to get things done — but this is no time to walk away from the table,” Hickenlooper said in a video announcing his candidacy for Senate, just one week after ending his presidential campaign. “I’m not done fighting for the people of Colorado.”

But the field of 11 Democrats already running hasn’t cleared the way for Hickenlooper’s candidacy — and a loud contingent of progressive activists aren’t excited about handing the former governor the nomination.

“There are new voices ready to lead across our state and in the US Senate, voices who understand that there is no back to normal, there’s only forward to normal,” Democratic Senate candidate and former diplomat Dan Baer said.

“This won’t be a coronation,” state Sen. Angela Williams, another Senate candidate, said.

Former Colorado House Speaker Andrew Romanoff and former state Sen. Mike Johnston have registered the most interest in early polling, and they look like they’re staying in the race as well.

Colorado is by far Democrats’ most promising Senate target in the 2020 election cycle. Last year, Democrats won control of the state’s entire legislature, in addition to clinching the governor’s office. But progressives see that as a sign that Hickenlooper, a Democrat who has championed more moderate policies, is no longer representative of the Democratic base in Colorado.

“There is a bigger feeling of a bit of sadness because hundreds of thousands of people across the state worked to deliver wins in 2018 — Democratic victories up and down the ticket,” said Katie Farnan, who runs the progressive activist group Indivisible Front Range Resistance. “We are not going to slide back some middle ground where we are going to talk about civility and the importance of working across the aisle. Who is across the aisle right now?”

Democrats have a lot on the line in 2020 when it comes to the Senate. Senate Republicans hold a three-seat majority and will have to defend 22 seats in 2020. Democrats, meanwhile, are up in just 12 states.

But the map still doesn’t look good for them, and even if they manage to retake the White House, a Senate majority stands between them and the ability to pursue any real legislative agenda.

Colorado, where Gardner is up for reelection in 2020, is among the few glimmers of hope. Democrats had easy statewide wins there in 2018, and the demographics are shaping up for them more broadly; the Latinx population has changed the political tide in the state, as have young voters, and President Donald Trump’s popularity in Colorado has tanked ever since he took office.

Gardner, who is running for his second term in the Senate, has done little to distance himself from the president. He’s cemented his reputation as a party man, successfully chairing the National Senate Republican Committee, the official campaign arm for Senate Republicans, and growing the Republican majority in the Senate. He’s also endorsed Trump, and even flipped to support things like the president’s national emergency for the border wall.

Hickenlooper has long been seen as a logical top-tier candidate to face Gardner (he won statewide when Gardner came into power in 2014, a Republican wave election). And it’s clear Republicans see him as a threat; they’ve been hitting him for his failed presidential campaign and for past comments about how he was “not cut out to be a senator.”

But notably, Democrats haven’t cleared a path for Hickenlooper either. He joins a long list of lesser-known Democrats in the race, many of whom would be historic if they won. Colorado has never had a woman serve the state in the Senate; currently seven — including several women of color — are running. Baer would be the first openly gay senator if elected. And many of the candidates in the race are more progressive than Hickenlooper.

Progressives think Hickenlooper is too moderate for Colorado

During his short-lived presidential bid, Hickenlooper talked up his bipartisan bona fides, a track record that progressives are already questioning.

Hickenlooper’s governorship occupied a more centrist lane in part because Republicans controlled one chamber of the state legislature throughout his governorship, but that bipartisan work has also been central to his brand.

As governor, Hickenlooper opted to expand Medicaid in Colorado, which he touted on the 2020 campaign trail as bringing near-universal health care coverage to his state. And he’s repeatedly partnered with Republican Ohio Gov. John Kasich; the two crafted a health care proposal to reform the Affordable Care Act that stayed well clear of single-payer health care, and wrote to President Trump in support of NAFTA.

Progressives specifically mention environmental issues as an area of concern. Environmentalists in his state are quick to point out that Hickenlooper twice fought off regulations that would have kept oil companies farther from homes, schools, and parks. He has touted making “compromises” with industry as a path forward. But compromise on climate change is a far cry from the current environmental movement in the Democratic party.

“The state of play is you can be just as terrible as a Democrat because of money in politics,” Farnan said. “At this point in time, does Hickenlooper understand that because he is taking money from the oil and gas industry, we can’t trust him?”

That said, some Democratic political watchers in the state think Hickenlooper will campaign differently for the Senate.

“The decisions you make as governor are different than [as] senator,” one Colorado Democratic strategist said, speaking on the condition of anonymity because of their client list. The strategist noted that they foresee Hickenlooper moving left specifically when it comes to energy issues. “As governor, you negotiate deals not everyone loves, but in the Senate race, it’s different — you are not negotiating with companies to keep them in Colorado.”

In Hickenlooper’s announcement video, he talked about his support for public lands and climate change, saying the country is “running out of time to confront” the issue.

And at the end of the day, everyone’s priority, Farnan said, is getting Gardner out.

“Obviously Gardner is horrible; he needs to go,” she said. She’s currently on a statewide bus tour campaigning to unseat Gardner alongside seven other Colorado progressive activist groups.

And there is a silver lining, Farnan added.

“Well, I’m glad he dropped out of the presidential race,” she said of Hickenlooper. “That’s the good thing.”