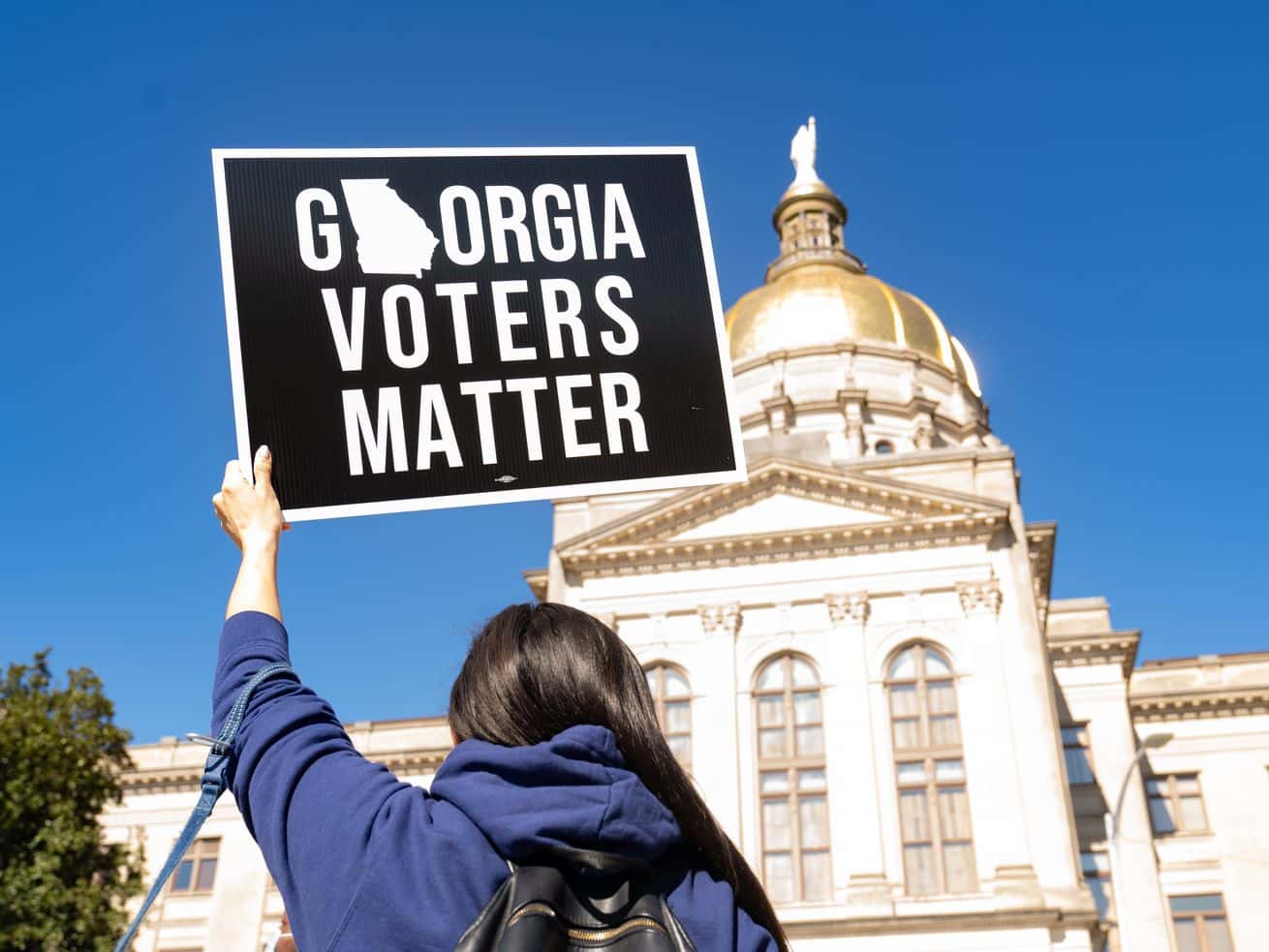 Brands have taken to weighing in on social issues. Coke and Delta’s condemnation in Georgia is a little different.

Corporate America has, once again, found itself in the crosshairs of politics with the passage of Georgia’s restrictive new voting law, which was signed by Gov. Brian Kemp last week. The bill, known as SB 202, will increase voting restrictions for Georgians by requiring identification for mail-in ballots, shrinking the window for early and absentee voting, limiting the number of ballot drop boxes, banning the provision of food and water to voters waiting in line, and shifting control over local election rules to the state legislature, among other changes. (SB 202 does expand voting access to rural areas, according to a Washington Post analysis, but the added restrictions draw on a long history of voter suppression, specifically directed toward Black voters.)

Prior to the Georgia bill’s passage, few major companies directly commented on the bill, with the exception of Salesforce and Patagonia. Some, like Coca-Cola, Delta Air Lines, and Home Depot, were reticent due to their employment ties to the region; their corporate operations are often affected by decisions made by Georgia’s legislative body. In the past week, however, prominent American brands — from Major Baseball League to Coca-Cola — have publicly condemned the law’s passage and, more broadly, general efforts of voter suppression. Last Friday, the MLB declared it will relocate the 2021 All-Star Game and the MLB draft out of Atlanta.

The corporate outcry is partly a response to the collective action by voting rights activists and a letter penned by a group of prominent Black business executives. Led by Kenneth Chenault, a former chief executive at American Express, and Kenneth Frazier, a chief executive at Merck, 72 Black business leaders signed on to a letter that urged corporate America to “publicly and directly oppose new laws that would restrict the rights of Black voters,” according to the New York Times.

The letter didn’t lob criticism at any specific company or executive, and some of the corporate signers themselves previously did not take a public stance on the law. Yet Frazier told the New York Times that he hoped the letter would encourage companies to speak out against dozens of similar bills in other states. “The Georgia legislature was the first one,” he said. “If corporate America doesn’t stand up, we’ll get these laws passed in many places in this country.”

“If corporate America doesn’t stand up, we’ll get these laws passed in many places in this country”

It’s not unusual for brands to make their thoughts known on major political events and tragedies, or even alter corporate policy as a direct response. In a few cases, significant corporate blowback has led to a repeal or a reconsideration of unpopular laws: North Carolina partially repealed its “bathroom bill” in 2019, after the NBA threatened to host that year’s All-Star Game elsewhere. Voting rights advocates have also pushed for a national consumer boycott of brands that didn’t take an active stance against the Georgia legislation. While companies did state their support of general “voter rights” when pushed, few made explicit statements until it was too late. Coca-Cola and Home Depot, the largest employer in the state, previously told the Washington Post that their companies are “aligned” with the statement issued by the Georgia Chamber of Commerce in mid-March, which expressed concern over the restrictions proposed in the SB 202 bill.

Meanwhile, Delta, which bases its largest hub in Atlanta, has found itself in a bind between consumer and legislative interests. The hashtag #BoycottDelta began trending in late March after it was revealed that the airline had a role in crafting SB 202 with the help of its lobbying team. CEO Ed Bastian had also praised the law’s passage before walking back his initial statement. In a revised public statement, Bastian emphasized that “the final bill is unacceptable and does not match Delta’s values,” adding that the “entire rationale for [SB 202] was based on a lie: that there was widespread voter fraud in Georgia in the 2020 elections.”

Our co-founder Ben Meiselas received a tip from a confidential insider and broke the story of the abhorrent statement from @Delta praising the Georgia voter suppression bill and stating that the company worked to craft the bill. We are calling on everyone to #BoycottDelta pic.twitter.com/W6QRXbY5Hp

In response to this widespread corporate condemnation, outspoken members of the Republican Party lambasted the brands for siding with “the woke left.” “They like our public policy when we’re doing things that benefit them,” said Georgia state House Speaker David Ralston, according to the Atlanta Journal-Constitution. “You don’t feed a dog that bites your hand. You gotta keep that in mind sometimes.”

Delta is now being treated like a biting dog; the Georgia GOP-controlled House has voted to revoke the company’s jet fuel tax break, something it also did in 2018 as political retribution, CNN reported. According to the Hill, some Republican legislators have also called to ban all Coca-Cola products from their offices in a letter to the Georgia Beverage Association, citing Coke’s “choice to cave to the pressure of an out of control cancel culture.”

Such is the dilemma faced by corporate America, which has to cater not only to stakeholders and local officials, but also to the greater political standard maintained by consumers. For big and powerful companies like Coca-Cola and Delta, consumer outrage and boycotts (aspects of “cancel culture” that Republicans frequently denounce) don’t often have major economic impacts. Brands care about public perception and demonstrating consistency in their liberal values. That’s why so many remained mum on the Georgia bill until it became necessary to condemn its passage, thanks to the work of state activists and some high-profile Black business leaders. Coca-Cola doesn’t fear cancellation. Its reputation could be sullied on Twitter for a few days, but the company’s products are mainstays in grocery stores nationwide. What’s important is that the public remembers Coke spoke out against SB 202, even if it was a little late to the punchline.

The Trump presidency has facilitated an era of consumer activism, coupled with conscious consumerism, that increasingly demanded corporate accountability and transparency. Under Biden, there might now be fewer outrageous national issues that require public comment, but stateside policy, as illustrated by Georgia’s restrictive voting law, still could have an outsize impact on future elections.

The pandemic and the Black Lives Matter protests last summer have renewed Americans’ sense of activism. Many companies have since pledged to incorporate anti-racist messaging and ideology into their workplaces and policies. Last Friday, executives of nearly 200 major companies including HP, Target, and United Airlines signed on to a statement that denounced voting bills in state legislatures similar to SB 202. “There are hundreds of bills threatening to make voting more difficult in dozens of states nationwide,” read the statement, which was organized by Civic Alliance, a nonpartisan organization focused on voter engagement. While the intention behind the 157-word statement was political, its message still came across as vague. No specific states or bills were mentioned.

For voting rights advocates, the next battleground over restrictions is Texas, where a number of bills have been introduced that would ban overnight early voting and drive-through early voting and require absentee voters to actively request ballots, rather than have them automatically sent. So far, the Texas-based American Airlines and Dell have publicly criticized the state proposals. It remains to be seen whether corporate denouncement of certain policies will affect whether laws get passed, or if company resistance is as simple as signing on to a statement with no guarantees.

“We want them to lobby senators about passing the currently pending bill and use their forces to lobby that just as aggressively as they would to advance their own corporate interests,” Cliff Albright, executive director of Black Voters Matter, told the Washington Post. “At the end of the day, democracy is in their business interest.”