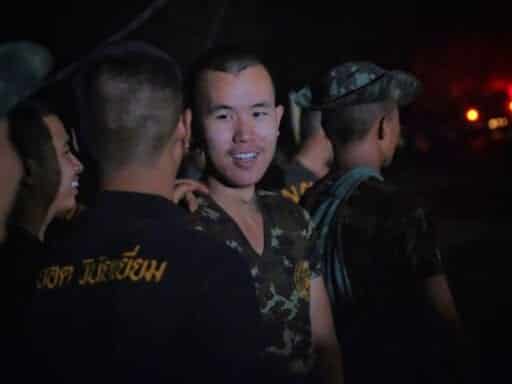 The two productions raise issues of whitewashing and the complexity of getting rights to the story.

Twelve Thai boys had scarcely been rescued from a flooded cave by divers and Thai Navy SEALS before the intention to shoot a movie adaptation was announced by PureFlix, the production and distribution company that focuses on faith-market releases like the God’s Not Dead series and The Case for Christ.

A day later, a second film about the events was announced, this time helmed by Jon M. Chu (director of the upcoming Crazy Rich Asians) and produced by LA-based Ivanhoe Pictures. Ivanhoe’s president announced that the company had been selected by the Thai Navy and Thailand’s government to develop the film.

It’s not uncommon for multiple movies or TV shows about the same person or real event to come out around the same time. Think of 2006, when both Oliver Stone’s World Trade Center and Paul Greengrass’s United 93 came out. Or 2016, when the documentary O.J.: Made in America and the scripted TV show The People v. O.J. Simpson: American Crime Story were both released. It happens a lot.

And this rescue story, which garnered weeks of high-profile news coverage and captivated people around the world, will inspire more than just these two films. For instance, Deadline reported that Discovery Inc. ordered a documentary about the rescue mission to first air on Friday, July 13 — just days after the rescue — and the Wall Street Journal noted that books are likely on the way, too.

But these two “fiction” films attracted particular attention because of questions about how the story would be approached by the two companies, fueled partly by comments Chu made on Twitter about “whitewashing,” as well as competing efforts to obtain the rights to the story — and the realities about who owns those rights.

What does it mean to say the film could be “whitewashed”?

On Wednesday, Chu — who is Chinese-American — weighed in via Twitter, confirming his intention to make his own film in response. In his tweets, Chu suggested that Hollywood might “whitewash” the story.

“That won’t happen or we’ll give them hell,” he wrote, saying that “anyone thinking about the story better approach it right & respectfully.”

And though Chu didn’t name Pure Flix specifically in the tweets, the timing suggested it was in response to the company’s announcement about its intention to make the film.

I refuse to let Hollywood #whitewashout the Thai Cave rescue story! No way. Not on our watch. That won’t happen or we’ll give them hell. There’s a beautiful story abt human beings saving other human beings. So anyone thinking abt the story better approach it right & respectfully.

Its a bit early 2truly discuss but the biggest lesson I learned frm making #CrazyRichAsians is that we must tell our stories especially the important ones so history doesnt get it wrong.This one is too important 2 let others dictate who the real heroes are https://t.co/ZmnSBFvPI3

We have the power to not only MAKE history but be the historians that RECORD it too. So that it’s told correctly and respectfully. Couldn’t just sit here watching how others would “interpret” this important story. https://t.co/kRv5k9plDU

For his part, Pure Flix producer and founding partner Michael Scott said in a video posted to Twitter that his goal was to make an inspiring movie, but not necessarily a “Christian movie.” According to company reps, the company intends to produce the film through Pinnacle Peak, Pure Flix’s more mainstream brand.

Reached via email in Thailand, Scott explained why he was interested in the project. “This story has a personal connection for me, as my wife (who is from Thailand) knew Navy Seal Saman Kunan who died during the rescue,” Scott wrote. “I spend many months here a year, and it was incredible to see a miracle happen with these young boys and the rescuers.”

Scott reiterated that Pure Flix’s intention was not to make the movie “for one specific ‘religious’ audience … Often times people try to turn a story meant to inspire into a political statement, or with a specific agenda in mind. As we pursue this opportunity, we are considering how to keep the film authentic to what occurred and who was involved.”

Though Pure Flix has been the target of some criticism (including from me) for elements of its movies, there’s nothing in its history that would specifically suggest it would “whitewash” the rescue story. Nor is Pure Flix a “Hollywood” studio by any real definition of the term — it often produces and distributes its films itself, outside the entertainment mainstream, and its streaming service consists largely of films and TV shows that aren’t part of the entertainment produced by Hollywood’s biggest studios.

That makes Chu’s tweets a little curious. But there’s a history behind them, whether or not Pure Flix is the right target.

As Vox’s Joss Fong and Christophe Haubursin explain in this video, Hollywood has a history of not just giving Asian roles to white actors, but also using those roles to mock Asian people:

The most recent instance of “whitewashing” controversy roiled in 2016, when Scarlett Johansson was cast as Motoko Kusanagi, the Japanese lead character in Ghost in the Shell adapted from Masamune Shirow’s manga. The film’s producers chose to make the main characters more white rather than casting Asian actors for the roles — a practice that seems remarkably backward in the 21st century.

Though the term “whitewashing” is usually applied to casting, Chu may also have been alluding to Hollywood’s history of making “white savior” movies, in which stories about people of color or in distant lands are supposedly made more “relatable” to an American audience by inserting a white and often American figure into the story who saves the day. That criticism was leveled, for instance, against The Great Wall, a film about Chinese people that kind of randomly inserted Matt Damon into the story, too. (The film turned out to be a dud, if an eye-popping one.)

And although a number of the divers who helped rescue the boys from the cave were white Europeans, the story is, fundamentally, a Thai story with Thai protagonists; the ex-SEAL who died in the rescue attempt was Thai as well.

So it’s likely that in saying that “we have the power to not only make history but be the historians who record it,” Chu is worried the film will center the outsiders who came to help rather than the community at the heart of the story.

But whether or not whitewashing is ultimately part of the PureFlix project, Chu’s comments did attract attention to Ivanhoe Pictures’s version of the story. And that brings another consideration into play: Who owns the rights to this story? Can there be two Thai cave rescue movies at once?

Could two cave rescue films happen at the same time?

The short answer: Yes, and it’s likely they will.

David A.R. White, co-founder of PureFlix, told the Wall Street Journal that the company was pursuing life rights from some of the people involved. “You get their stories, and then it’s a matter of making sure the writer can tell the story in a dramatic and inspirational way,” he told the WSJ. “At the same time, these stories still have to be entertaining and moving.”

“My co-producer Adam Smith and I are in the initial phases of producing and gathering information,” Scott confirmed by email. “We are talking to several people about the film release and considering a partnership, if it makes sense.”

For its part, Ivanhoe Pictures is in talks with “the most senior officials in Thailand, both on provincial and national levels, about the rescue project,” according to Variety

“If it’s a newsworthy event. If the story’s fact, then nobody owns that story,” entertainment and intellectual property lawyer Stephen Rodner explained by phone. Rodner, senior counsel at Pryor Cashman in New York, has long worked with clients seeking to adapt true stories for the screen.

To put it simply, Rodner said, any newsworthy story is fair game, at least under US law. Even a public figure can’t block someone from making a movie about his or her life, though Rodner notes that “the one thing you can’t do is libel anybody in the film.”

However, the private details of an individual’s life, as well as elements of the story that were not publicly reported, are not as readily available. To gain access to those, a production company would need to find ways to make deals with individuals and entities involved in the story.

It all boils down to access. Because Ivanhoe Pictures is working with the Thai Navy and the country’s government, for instance, they may have access to people, places, and information more easily in making the film.

And at least under US law, acquiring life rights can give the filmmakers access to information that may be private. “I assume they could make a contract with the people involved and get information that nobody else has,” Rodner said. “They can also, by contract, have them not cooperate” with any other production, noting that the people under question in this case are not US citizens and thus the laws may vary some.

But “as far as making a film on a newsworthy event, anybody could do it,” Rodner noted. And there’s no way for one production to block another from happening, unless one screenplay blatantly rips off another. Publicly reported news stories are fair game to anyone.

Given the commercial value of the story, there’s a strong possibility that both films could go ahead, and maybe even be released around the same time.

And that’s a smart business move. As critic Lara Zarum wrote in the Village Voice following the release of Clint Eastwood’s The 15:17 to Paris, Hollywood has always had a fascination with quickly retelling tales of heroism, stretching back to the 1930s. Since 9/11, those stories have taken on a particularly triumphal and patriotic cast for Americans, in movies like Lone Survivor and American Sniper.

But, as she notes, “the acceleration of this process over the past decade means more and more people absorb these incidents not through reporting but through the prism of Hollywood convention, with all the mythologizing and smoothing-over of inconvenient bumps that implies.”

It’s possible that’s what Chu is worried about: that the movie version of the rescue story will become the version of the story in people’s minds, and that it may displace the Thai community who rallied around the rescue attempt in favor of a white savior.

For their part, PureFlix sees the film as an inspirational tale anyone could appreciate. “I believe this story demonstrates all the elements audiences long for — hope in the midst of tragedy, a miraculous story, the determination of the boys, their coach and the rescuers. It exemplifies the power of the human spirit,” Scott wrote. “This was an event every parent could identify with and that united our world as we all prayed for a miraculous outcome, and one we received.”

Making a movie takes a while, so we won’t know the results right away. But for now, the race to bend the Thai cave rescue saga into a captivating big-screen spectacle is on.

Taco Bell is removing some vegetarian menu items. Here’s why you shouldn’t panic.
The Supreme Court just backed away from one of its cruelest death penalty decisions
What we learned from the BuzzFeed News report that Trump told Cohen to lie to Congress
10 psychological haunted-house movies — for when the ghost might be you
Roger Stone was just found guilty on all counts
Caitlyn Jenner is running to replace California Gov. Gavin Newsom in likely recall election