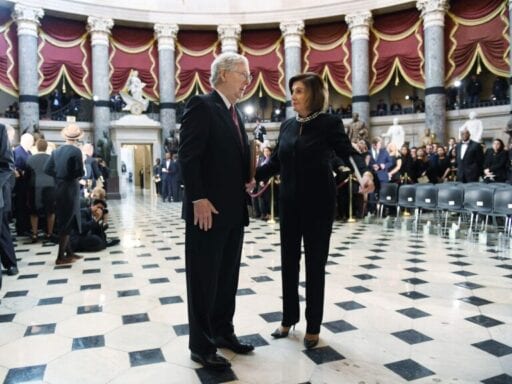 Share
Loading...
Senate Majority Leader Mitch McConnell (R-KY) and Speaker of the House Nancy Pelosi (D-CA) chat before a memorial ceremony for Congressman Elijah Cummings (D-MD). The two leaders and their respective Appropriations Committees need to hammer out a spending deal before the end of the year. | Matt McClain-Pool/Getty Images

It’s the same issue that led to a government shutdown last year.

Congress is once again facing an imminent deadline when it comes to approving funding to keep the government open. And the hang-up (once again) is President Donald Trump’s desire for a border wall.

Because of this impasse, lawmakers are (once again) punting the problem further down the line.

The House and Senate have a deadline of Thursday, November 21, at midnight to approve 12 spending bills. At this point, they aren’t close to meeting it. Because of this, lawmakers are expected to pass yet another short-term bill — known as a continuing resolution, or CR — that’s intended to fund the government through late December, right before the Christmas break. The House already passed the CR on Tuesday, and now it heads to the Senate where Majority Leader Mitch McConnell has expressed his support.

Congress had already approved a stop-gap spending bill in September to get to the latest November deadline. The new CR will keep funding levels across different agencies including the Department of Homeland Security predominately at the same levels as they have been this past fiscal year, although it includes additional funds for the Commerce Department to carry out the 2020 US Census and money for a 3.1 percent pay raise for members of the military. Still, the bill will essentially postpone the border wall fight until December 20.

This standoff is already frustrating appropriators in the House, who are complaining that the Republican-controlled Senate is being too deferential to Trump and procrastinating on solving thorny funding issues.

“We need to get our work done by December 20,” an exasperated House Majority Leader Steny Hoyer (D-MD) told reporters Tuesday. “Will we be able to? The wall, I think, is a major impediment. But that’s only one bill. It ought not to adversely the other 11 bills being held hostage, essentially.”

Hoyer reminded reporters the House started its appropriations work in January and passed most of its funding bills by this summer.

“Time is not the issue here, will is the issue here,” Hoyer said last week. “The willingness to come to a compromise, the willingness of the Senate to pass bills, whatever they are. They could have done that, they didn’t do it because the White House said ‘don’t do it.’”

Republican leaders on the Senate Appropriations Committee acknowledged the big hold-up on progress is still funding for the border wall, which Democrats still don’t want to budge on and the White House doesn’t want to give up.

“We’re trading offers back and forth, still,” Senate Appropriations Committee Chair Richard Shelby (R-AL) told reporters Tuesday. “We have deadlines, then they come, and we create more deadlines.”

The Senate has lagged the House in its approval of appropriations bills thus far, passing just four of the 12 spending bills. McConnell on Tuesday said he backed a bill that would keep the government funded and open through December 20 as lawmakers continued to sort through their differences on appropriations.

“What is needed in the near term is to keep the government open for the next several weeks while this work goes on,” McConnell said in a floor speech.

This timing sets up a deadline that leaves the door open to an end-of-year shutdown — setting up another budget fight that could coincide with a potential vote on articles of impeachment if Democrats move on that.

Where things stand in the House and Senate

Currently, the House and Senate don’t seem particularly close to an agreement about what these final spending bills could look like.

Following the Senate’s passage of a four-bill minibus in October, House Appropriations Chair Nita Lowey (D-NY) called on lawmakers to begin the conference process that allows the two chambers to negotiate on a final version of the bill. These negotiations — along with talks on the other eight bills — are stalling, particularly over border wall funding. President Donald Trump is maintaining his demands for $5 billion in wall money; Democrats are equally obstinate against funding it, while Senate Republicans are seemingly ready to give him the funds.

“To reach agreement on allocations, Senate Republicans must drop their insistence on funding a wasteful wall at the expense of critical domestic programs,” Lowey said in a statement.

House Democrats, meanwhile, badly want to be the party of appropriations stability. Democrats swept into power during the country’s longest-ever government shutdown — one that went into effect under Republican leadership and was caused by the border wall standoff last year.

“This wall has been holding up government for a long period of time now,” Hoyer said last week.

Democrats started the year with the hope of passing a long-term spending deal to give federal agencies some peace of mind after months and months of CRs. And Democratic leaders a few months ago sounded hopeful that Shelby and Senate Majority Leader Mitch McConnell also wanted to reach a long-term deal. But if the last few months have shown anything, it’s that getting to “yes” is easier said than done when the president’s border wall is hanging over negotiations.

“Sadly, essentially what Senator McConnell is saying is he will not act unless the president tells him to sign a bill. That’s not the role of the Congress of the United States,” Hoyer told reporters Tuesday.

In addition to a hold-up over the wall, the Senate has been embroiled in a fight over the levels of funding bills would provide to agencies governing Education and Labor, departments that Democrats see as being shortchanged in the allocations they’re receiving.

What this means for another potential shutdown

The decision to use yet another CR puts Congress in a position that’s very similar to the one it found itself in last year. The latest CR is slated to expire on December 20, shortly before the Christmas holiday, forcing lawmakers to approve at the very least a third stopgap measure in order to prevent a shutdown.

At this same point in 2018, lawmakers were poised to pass another CR only to have President Trump decide that he’d be willing to shut down the government in order to obtain wall funding. Trump’s move wound up leading to the longest partial government shutdown in US history, though it did not result in Congress approving wall money.

The president ultimately signed a funding package that reopened the government while simultaneously declaring a national emergency that has enabled him to shift funds from other military construction projects to the border wall.

This year, the ongoing impasse between the president and congressional Democrats is further complicated by the impeachment inquiry, which could move into a Senate trial right around the new year.

Earlier this fall, Senate Minority Leader Chuck Schumer suggested that the president might leverage a shutdown as a distraction during the impeachment proceedings. “I’m increasingly worried that President Trump may want to shut down the government again because of impeachment,” he told reporters during a press briefing.

This possibility adds to the pressure on lawmakers as they seek to finalize spending bills alongside the ongoing inquiry.

Morning Brew, the business newsletter publisher for millennials, is in talks to sell itself to Busin...
AOC and Ilhan Omar call for Stephen Miller’s resignation over his promotion of white supremacist art...
Steve Bannon has been arrested on fraud charges
The 7 most important moments from Brett Kavanaugh’s Senate testimony
In defense of Sarah Jeong
Rand Paul sues neighbor-turned-attacker for medical and legal fees