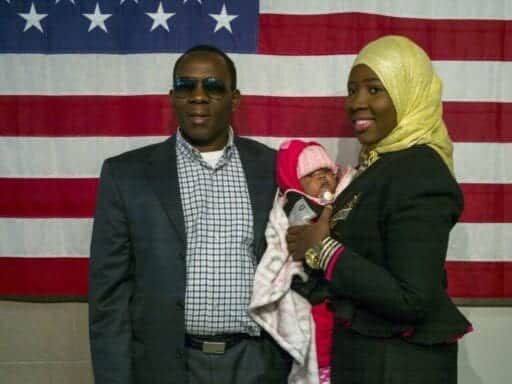 Share
Loading...
Mohamed A. Sanoe, left, a Liberian national, stands with his daughter, right, in front of a US flag after taking the oath to become a US citizen at Citizenship and Immigration Services in New York on November 13, 2015. | Robert Nickelsberg/Getty Images

Liberians who have lived in the US with temporary legal status for decades now have a path to citizenship — under a provision quietly folded into a $738 billion defense policy bill that President Donald Trump signed earlier this month.

US Citizenship and Immigration Services announced Thursday that it started accepting green card applications for Liberians who have lived in the US since November 2014, as well as their spouses and unmarried children. After holding a green card for five years, eligible Liberians can apply for US citizenship.

Sens. Jack Reed (D-RI) and Tina Smith (D-MN) had originally proposed the legislation offering green cards to Liberians as an individual bill, before it was tacked on to the National Defense Authorization Act (NDAA). In an era of deadlocked immigration policy, this marks the first time in decades that Congress has offered a pathway to citizenship to a new group of immigrants.

“Separating and uprooting hundreds of Liberian-American families from their jobs and homes and forcing them to return to a country that is unrecognizable for many of them would not have been in America’s best interests,” Reed said in a statement in March.

Civil war drove thousands of Liberians to seek refuge in the US from about 1989 to 2003 under a program known as Deferred Enforced Departure (DED) that gave them temporary protection from deportation. About 4,000 Liberians continue to live in the US with DED status, which Trump threatened to end last year before deciding to extend the wind-down period to March 30, 2020.

“The reintegration of DED beneficiaries into Liberian civil and political life will be a complex task, and an unsuccessful transition could strain United States-Liberian relations and undermine Liberia’s post-civil war strides toward democracy and political stability,” Trump said at the time.

But Liberians still lobbied Congress to allow them to remain in the US permanently, rather than being forced to return to a country they no longer know and that is still reeling from the aftermath of a civil war. Conditions in Liberia haven’t sufficiently improved — the economy remains on shaky footing and the country was hit by an Ebola epidemic — and ending DED would constitute discrimination based on Liberians’ race and national origin, they argued in a lawsuit filed earlier this year.

Liberians have also held other temporary protections over the years. They were offered Temporary Protected Status — a form of temporary legal status offered to nationals of countries that are experiencing crises such as natural disasters or armed conflict — until the Trump administration revoked it in 2017. Most of those with TPS status, however, have since attained DED status.

Many Liberians also participate in the Deferred Action for Childhood Arrivals program, which has offered deportation protection and work authorization to more than 700,000 young unauthorized immigrants who came to the US as children.

Allowing them to apply for green cards is the kind of permanent relief the Liberian population in the US has long sought. Under the NDAA, they won’t be subject to the “public charge” test, under which the US could deny them green cards if they are likely to become dependent on government assistance in the future. The Trump administration has attempted to expand the kinds of immigrants who would be barred admission to the US on that basis earlier this year, but court rulings have blocked it so far.

Biden’s post-Electoral College speech was a stinging rebuke of Trump
Goop was fined $145,000 for its claims about jade eggs for vaginas. It’s still selling them.
Colleges say campuses can reopen safely. Students and faculty aren’t convinced.
Hong Kong’s pro-democracy lawmakers quit en masse. One explains why.
How safe is it to use public bathrooms right now?
The future of the Senate majority could hinge on two Georgia runoffs