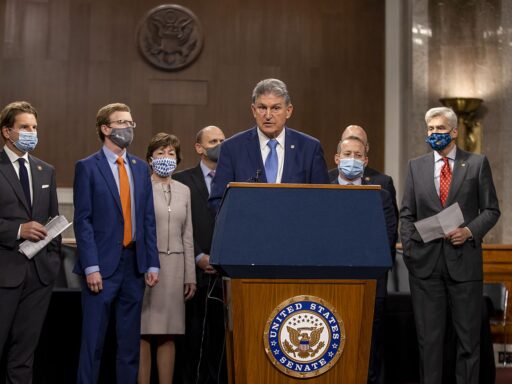 A bipartisan group of senators and members of the House unveiled a new $908 billion plan for emergency Covid-19 relief funding on Tuesday. Now, 24 hours later, there has been more movement on stimulus negotiations than in the past three months.

In a statement Wednesday, House Speaker Nancy Pelosi and Senate Minority Leader Chuck Schumer said the bipartisan framework — with extended unemployment benefits, state and local aid, and small business loans — should be “used as the basis for immediate bipartisan, bicameral negotiations” with Senate Majority Leader Mitch McConnell. (McConnell on Tuesday started circulating a counterproposal of his own among Republicans.)

“In the spirit of compromise we believe the bipartisan framework introduced by Senators yesterday should be used as the basis for immediate bipartisan, bicameral negotiations,” Pelosi and Schumer said. “Of course, we and others will offer improvements, but the need to act is immediate and we believe that with good-faith negotiations we could come to an agreement.”

The movement from Democrats is significant; it comes after months of stalemate on stimulus talks, and during a critical time in the Covid-19 crisis as the US sees another surge in cases heading into the winter. About 14 million Americans receiving unemployment benefits will see those programs expire at the end of the month unless Congress takes action, and cities and states around the country are also facing massive budget shortfalls.

The plan was spearheaded by Joe Manchin (D-WV), Susan Collins (R-ME), and other senators, and supported by the bipartisan House Problem Solvers Caucus. It’s designed as a short-term extension of federal aid to see the public through the winter; the funding would extend benefits until April 1, around when many public health experts expect widespread distribution of a vaccine to be underway.

“This is going to get us through the most difficult times,” Manchin said at a Tuesday press conference announcing the framework.

McConnell, too, has made moves after meeting with White House officials on Tuesday to suss out what President Donald Trump wants to come out of a coronavirus relief deal. Backed by the White House, McConnell’s version of an emergency package is more limited, providing just a one-month extension of unemployment benefits, rather than the three-month extension in the bipartisan proposal.

On Wednesday, House Majority Leader Steny Hoyer told reporters that he and McConnell agree it would be “optimal” for leadership to wrap up negotiations on a relief package by the weekend, with the end goal being a bill on the floor by next Wednesday or Thursday.

“[McConnell] and I both agree that it would be optimal, if in fact we get to an agreement by the end of this weekend, get that agreement put on paper and memorialized so that we can consider it as early as Wednesday or Thursday of next week,” Hoyer said, adding, “I know that sounds very optimistic.”

With the November election in the rear-view mirror and coronavirus cases spiking across the country, there seems to be new momentum behind getting a deal done. But there’s still a long way to go, and Trump — who has proved the wild card for many a congressional deal — is still very much in the picture.

What’s in the bipartisan proposal

This new proposal is a $908 billion package that repurposes $560 billion in unused funds from the CARES Act, the $2.2 trillion stimulus package that passed in March, meaning that this new proposal adds only $348 billion in new spending. It’s much smaller than the $2.2 trillion revised HEROES Act that House Democrats passed in October, but larger than the $500 billion Senate Republicans were proposing in October.

Two large sticking points in negotiations have been whether there should be another round of stimulus checks (a priority for Pelosi and Trump) and liability protections for businesses worried about being sued for exposing customers and workers to Covid-19 (a priority of McConnell’s). Republicans came out on top on both of these issues (at least in this initial proposal) — stimulus checks are not included in this new bipartisan proposal and the framework provided by Sen. Manchin’s office notes that the proposal will “provide short term Federal protection from Coronavirus related lawsuits with the purpose of giving states time to develop their own response.”

Pelosi and Trump have signaled past support for another round of stimulus payments going out to working Americans. But both seem more interested in getting a narrower package approved, in the interest of timing and getting a bill passed quickly.

Here’s what made it into the bipartisan proposal:

This program expired in August, so any relief will be welcome for those still unemployed. Congress originally estimated that the UI program would cost $260 billion which the Tax Policy Center viewed as an underestimate, so it’s likely this extension wouldn’t cover the full cost of unemployed workers’ needs. The Washington Post reported that this amount would cover an additional $300 a week for four months.

The framework also includes $45 billion for transportation including airlines and Amtrak, $16 billion for vaccine development and more Covid-19 testing and tracing, $82 billion in federal education funding, $10 billion for the struggling US Postal Service, and $10 billion for child care, among other things.

“This is emergency relief, this is designed to get us through this next quarter,” Sen. Lisa Murkowski (R-AK) told reporters. “We know we have more to do, but … we cannot abandon the American people.”

What’s next for this proposal

With McConnell and the White House backing a skinnier Republican proposal, and Pelosi, Schumer, and the bipartisan group of lawmakers backing the $908 billion proposal, the real negotiations will begin.

McConnell’s version of an emergency package he sent to his Republican members on Tuesday contains no funding for state and local aid, no money for rental assistance, and provides just a one-month extension of unemployment benefits rather than the bipartisan proposal’s three-month extension. McConnell’s bill contains $332.7 billion for PPP loans, $100 billion for education funding, and $47 billion for vaccine distribution and testing and tracing. In the past, the Senate Majority leader has capped his bills at $500 billion.

With Democrats coming down from their starting point of $2.2 trillion with the HEROES Act, it’s yet to be seen whether McConnell will also budge from his position. Even though the bipartisan group has more leverage in the Senate, Trump is still president until Biden is sworn in on January 20, and McConnell told reporters he doesn’t want to pass anything that Trump won’t sign.

In the coming weeks, Collins, Manchin, and the others will have to reach out to a lot of senators to see if they can increase the support for their plan. But Democrats are also wary of what Trump — still stinging over his election loss and refusing to concede to Biden — will do with a stimulus package should it reach his desk.

In short, congressional and White House leaders may be talking, but there’s a long way to go in a short amount of time before a final deal can be reached.