Congress should cancel its Thanksgiving recess and pass another stimulus bill 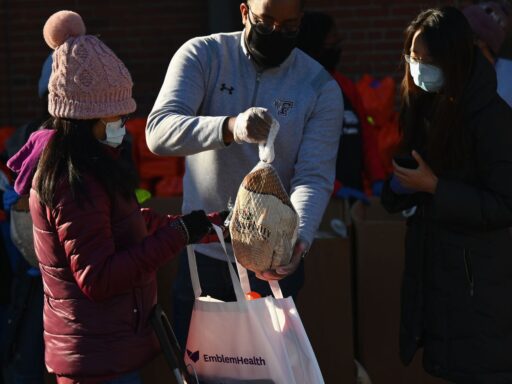 12 million Americans are about to lose unemployment insurance. Congress is on recess.

Millions of people have had to put their lives on pause and make enormous sacrifices throughout the Covid-19 pandemic — including, now, canceling Thanksgiving.

If regular people have to skip their holiday with loved ones, then Congress and the White House should cancel theirs, too, and get to work on crafting and passing legislation to help those people ride out the rest of the crisis.

Welcome to the 2020 holiday season. Public officials, scientists, and the media are pleading with Americans to avoid spending Thanksgiving with their families to prevent further spread of Covid-19 as it spikes across the country. The disease has already killed a quarter of a million people in the United States, who won’t be spending this or any holiday with their families ever again. People who gather for Thanksgiving, experts warn, should be prepared for funerals around Christmas.

Christmas, Kwanzaa, Hanukkah, and any subsequent holidays this year are not going to be very festive. A vaccine looks to be on the horizon, but it won’t be here by then, at least not in a widespread capacity. Meanwhile, millions of Americans are still out of a job, and if whatever federal help they’ve received hasn’t dried up yet, it’s about to. An estimated 12 million workers are poised to lose their unemployment benefits on December 26, the day after Christmas. Paused student loans, rent, and mortgages are all coming due.

The country has for months been locked in a will-they-or-won’t-they game on getting more financial support from the federal government. The Coronavirus Aid, Relief, and Economic Security (CARES) Act, the $2.2 trillion stimulus package signed into law in late March, made a real difference in the economy and in people’s lives. But many of the supports it put in place are over or are soon ending, and Washington lawmakers are home for the holidays instead of helping. Both the House and Senate are on recess for Thanksgiving week.

There is plenty of blame to go around here, but it’s not equally shared. In May, House Democrats passed the HEROES Act, a $3 trillion proposal to follow up the CARES Act. Senate Majority Leader Mitch McConnell has panned the legislation as “unserious,” but Senate Republicans have failed to agree on a plan of their own for more stimulus. House Speaker Nancy Pelosi and Treasury Secretary Steven Mnuchin spent much of the fall in a back-and-forth over potential stimulus plans, and while they were never quite able to put together a full agreement, it’s also never been clear what McConnell and the broader GOP would agree to in the first place.

Pelosi and Senate Minority Leader Chuck Schumer have asked McConnell to restart stimulus negotiations. In a letter to the Kentucky Republican sent the week before Thanksgiving, they asked him to “join us at the negotiating table … so that we can work towards a bipartisan, bicameral Covid-19 relief agreement to crush the virus and save American lives,” warning that the “pandemic and economic recession will not end without our help.” Schumer has signaled that there’s openness from Republicans to engage in discussions again, though it’s unclear what that commitment looks like.

Meanwhile, outgoing President Donald Trump’s role in stimulus talks remains what it’s been for months. He swings back and forth between outside agitator and cheerleader, but he doesn’t appear to see himself as a central figure in the process. Trump is spending Thanksgiving at the White House and not Mar-a-Lago this year, but his attention is focused on false claims that the election was rigged against him — helping struggling Americans, not so much.

“The odds that the economy backtracks, that job losses and unemployment increase, are high. You’ve got the intensifying pandemic, you’ve got very little prospect for any help from the federal government until the next president is inaugurated, and that’s early next year,” Mark Zandi, chief economist at Moody’s Analytics, recently told Vox. “It’s a pretty noxious brew.”

If a vaccine is relatively near, why not just get people to the finish line?

The economic downturn spurred by the pandemic has not been as bad as many economists originally feared, due in no small part to the actions the federal government took earlier this year. Savings rates actually went up throughout much of the year, and poverty did not increase as people scaled back discretionary spending, and programs such as expanded unemployment insurance, eviction moratoriums, student loan and mortgage forbearance, and stimulus checks had a real impact on household finances.

As coronavirus cases spike across the US, calls for more shutdowns have increased, but they’re not a realistic option if there isn’t more government help. As my colleague Dylan Scott recently noted, lockdowns are a regressive policy, because it’s primarily low-wage and low-income workers whose workplaces are affected. So we end up with half-measures like curfews, which businesses and workers hate and experts say don’t really make a difference; and schools being shuttered while restaurants and bars remain open, as Vox’s Anna North recently explained:

Money from the federal CARES Act kept many businesses afloat through shutdowns earlier this year, and expanded unemployment benefits and $1,200 stimulus checks kept many laid-off workers out of poverty. But with no more help on the horizon for businesses or ordinary people, shutdowns at the state and local level could have a steep cost, many say, leaving some local leaders hesitant to try them.

The American economy can’t get completely back to normal until the virus is under control, and more intervention in the economy could help control the virus. It could also help address an unequal, K-shaped recovery where people at the top do better a lot faster than those at the bottom.

On December 26, more than 12 million workers who were receiving unemployment benefits through a pair of expanded programs under the CARES Act will lose assistance, according to an estimate from the Century Foundation think tank. On December 31, renters, homeowners, and people who have student debt face a steep cliff as well. Washington is scheduled to be on recess then, too.

San Francisco hasn’t defunded its police force yet — but just voted to make it smaller
Exclusive: Biden leads Trump by 12 points in a national UT Dallas poll
A promising drug to slow the progression of Alzheimer’s was just unveiled
A delicious feast of food movies
The Supreme Court just handed Trump a big victory regarding his border wall
Vox Sentences: House Democrats are down with NDP