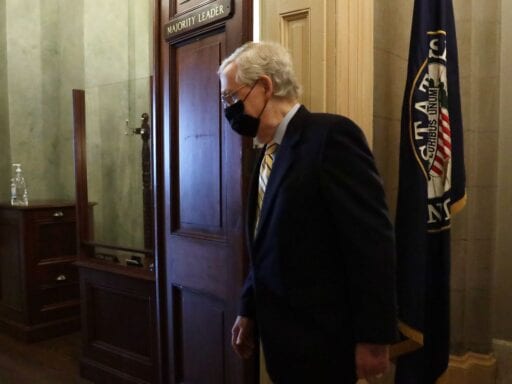 Share
Loading...
Senate Majority Leader Sen. Mitch McConnell returns to his office after a vote at the Capitol on September 10. The Senate failed to pass a procedural vote for a Republican proposed coronavirus relief package. | Alex Wong/Getty Images

Congress has tightened the stimulus spigot as unemployment for people of color remains high.

The national unemployment rate fell to single digits in August, at 8.4 percent. However, that number conceals America’s racially stratified economy. According to the Bureau of Labor Statistics, while white unemployment fell to 7.3 percent in August, the Black unemployment rate was at 13.0 percent, the Hispanic rate at 10.5 percent, and the rate for Asian Americans was 10.7 percent.

With unemployment of people of color still incredibly high, Congress has yet to approve another round of stimulus funding. And the terms lawmakers are discussing would be less generous than earlier rounds of stimulus. In their “skinny” stimulus bill, Republicans suggest setting the federal unemployment insurance benefit — which gave Americans receiving unemployment an extra $600 a week, before the program expired in August — to $300.

Congressional Democrats have remained adamant that a $600 per week benefit is necessary. Meanwhile, Democratic policy advisers like former Obama administration chair of the Council of Economic Advisers, Jason Furman, have pushed Democratic lawmakers to compromise, suggesting that an extended unemployment program be reinstated at $400 per week.

“The $600 a week boost to weekly unemployment checks may have made sense when the economy has shut down,” Furman wrote on Twitter, “But with an [unemployment rate] of 8.4 percent, it should change. The President’s $400 is reasonable—but the Senate needs to actually pass it for it to be real.”

However, other experts — pointing to the higher unemployment rate for people of color — disagree.

“Jason’s call is tone-deaf,” William E. Spriggs, chief economist for the union group American Federation of Labor-the-Congress of Industrial Organizations, wrote in an email to Vox.

Spriggs noted that not only is unemployment high for people of color, but that a growing number of job losses are permanent, “signaling the labor market is going to be very slow in recovering.” That, coupled with the fact families of color have fewer liquid assets than white families, “make the $600 necessary,” Spriggs said.

For many Americans living this reality, the combination of absent government stimulus and financial hardship is crushing. Just last week, a new NPR poll found “70 percent of Latinos in Los Angeles have experienced serious financial problems because of the job losses and other economic impacts during the pandemic.” To minority communities like these, and policymakers concerned about them, one thing is clear: topline statistics fail to capture all the events happening in a racially stratified economy, and policymakers should consider that in their stimulus.

The Covid-19 stimulus was generous until it wasn’t

In the early days of the coronavirus recession, it seemed that American policymakers had learned from their Great Recession mistakes.

As researchers for the ACLU and the Social Science Research Council noted in 2015, the last recession and recovery had a racial slant. Their “Impact of the US Housing Crisis on the Racial Wealth Gap Across Generations” report outlined “a tale of two recoveries,” noting that “white households have started to rebound from the worst effects of the Great Recession while Black households are still struggling to make up lost ground.”

“The divergent recoveries are important in the immediate term, but they are also an especially ominous sign for the future,” the report’s coauthors, Sarah Burd-Sharps and Rebecca Rasch, wrote. “Unequal opportunity to rebuild wealth coming out of the crisis is leading to widening racial disparities.”

This time around, the expanded unemployment benefit appeared to be the type of recessionary policy that economists had long been calling to provide everyday Americans, particularly working-class people of color, a foothold in the economy. As Vox’s Dylan Matthews notes, the $600 a week bump was “a massive expansion in the generosity of the program,” and it pushed the wage “replacement rate beyond 100 percent for workers with weekly wages below $600.”

But now, as the top line unemployment numbers have come down, Congress has failed to come to any consensus on aid for its most vulnerable citizens, particularly minorities. And this failure has left these Americans with no aid at all, abandoning them to suffer the effects of high unemployment in this unprecedented recession. And despite past warnings about the difficulty people of color have in recovering from recessions, lawmakers are repeating the mistakes.

Economists like Michelle Holder, an assistant professor of economics at John Jay College, argue policymakers failed to address the specific and predictable economic hurdles minorities faced in the last recession, and that in not extending unemployment benefits with an extra $600 a week, they are threatening to do so again.

“The unfortunate thing is that when our policymakers are proposing policies to deal with an economic and cyclical downturn, their approach is always a colorblind one, even under Obama,” Holder says.

The Obama administration largely failed to address economic disparities for African Americans and other minority groups during the last recession. Its $787 billion stimulus package was a contributing factor in Black Americans’ prolonged double-digit unemployment during the last downturn, Holder notes. Overall, providing insufficient stimulus during a time of great financial crisis has become a key criticism of the Obama administration, with scholars like Princeton’s Eddie Glaude Jr. going so far as to describe the Great Recession as the “Great Black Depression.”

It’s based on these sharp disparities that economists like Holder make their arguments against the reduction of the expanded unemployment insurance program pushed by many Republicans and some Democrats. And it is important lawmakers keep in mind this recent history, the mistakes that need to be avoided in designing future pandemic stimulus.

As Holder says, “Those calling for the scaling back for the elimination of unemployment insurance are missing the reality, which is in this country, the burden of the recession is not equally distributed.”

Meet the professional memers
Brexit is here. But what happens next?
The Lost Year: A dad, his son, and the bittersweet realization of life’s true priorities
The techlash is real, and Silicon Valley should be worried, says BuzzFeed’s Ben Smith
12 Monkeys, one of TV’s weirdest shows, ends with a delightfully meta series finale
Gun stores sue to stay open during the coronavirus pandemic