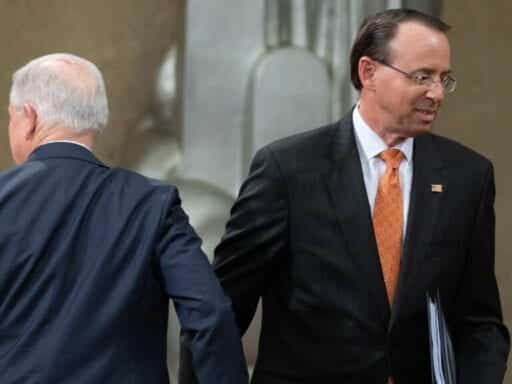 One Senator warned, “BEWARE of anything coming out of the New York Times.”

“Proceed with caution” — that’s the warning many conservatives are heeding after they seemingly got a massive boon on Friday afternoon. That’s when New York Times reporters Adam Goldman and Michael Schmidt released an exclusive story alleging that Deputy Attorney General Rod Rosenstein — whom President Donald Trump has privately mused about firing for some time — had spoken with other Justice Department officials about secretly recording President Trump and invoking the 25th Amendment to remove him from office. The conversation allegedly happened in the immediate wake of FBI Director James Comey’s firing.

Rosenstein denied the allegations, calling them “inaccurate and factually incorrect,” while reporters from the Washington Post allege, based on reporting from other sources who were in the room, that Rosenstein was being sarcastic.

To be sure, many on the right — particularly those close to the President and his most ardent backers, like Fox News host Laura Ingraham (who has since deleted her tweet) — jumped to an expected conclusion: It’s time to fire Rod Rosenstein, with some arguing that his denials weren’t “believable.”

But visible in both the replies to these tweets, and the tweets and statements of dozens of other conservatives, including many of Trump’s earliest supporters, was a note of caution. Though Rosenstein’s alleged offenses would seem to make the perfect case that nefarious elements with the government — the so-called “deep state” — have conspired to bring down Trump since the very beginning, there’s a problem: the source itself.

Can they now believe anonymous sources from the “failing New York Times,” whom many on the right believe to have spread “fake news” previously?

$50 says the people who decry anonymous sources and the NY Times overall will accept the story just published about Rosenstein, no questions asked.

“BEWARE of anything coming out of the New York Times”

Sen. Lindsey Graham, who has become one of the President’s biggest cheerleaders in Congress, shared the New York Times’ story with an addendum: “When it comes to President Donald Trump….. BEWARE of anything coming out of the New York Times.”

When it comes to President @realDonaldTrump….. BEWARE of anything coming out of the @nytimes. https://t.co/NR24rVdknw

And Bill Mitchell, a conservative talk-show host who promised that Trump would win the 2016 election with “100% certainty” and has remained a die-hard Trump supporter, tweeted that the story was “just NYTimes unnamed source BS” and told his more than 375,000 followers to “ignore this story.”

Backing up the fact this story is fiction, the story itself says there is no indication Rosenstein ever actually followed through on this.

The skepticism isn’t coming only from Trump’s most dedicated supporters. Others, from mainstream conservatives to members of Congress, noted former FBI Deputy Director Andrew McCabe’s response regarding the memos referenced in the story and both the anonymity of the Times’ sources on Rosenstein’s remarks and the fact that the Times’ sources weren’t even in the room when Rosenstein allegedly expressed interest in wearing a wire to record the President. They pushed back on Twitter.

Look, Rod Rosenstein is a high-ranking DOJ official. I think it’s safe to say he is familiar with how both the US Constitution and politics work. There is a zero percent chance that he, unlike flatulent media commentators, was seriously floating removal under the 25th Amendment.

Even former Rep. Jason Chaffetz, who just published a book entitled The Deep State: How an Army of Bureaucrats Protected Barack Obama and is Working to Destroy the Trump Agenda, seemed aghast at the allegations against Rosenstein (whom he described earlier this year as having “absolutely no credibility”.)

.@jasoninthehouse on Rod Rosenstein report: “It seems outrageous. I can’t imagine any plausible scenario in which that would even have a chance to be true.” #DailyBriefing pic.twitter.com/nn5lTuqaXH

Rep. Matt Gaetz, who is close to the President, seemed to strike a similarly cautious tone regarding the allegations in a statement that referenced anonymous sources that are “far from a guarantee of veracity.”

A strikingly reserved statement on Rosenstein by @RepMattGaetz, who is one of Trump’s favorite members of Congress. A signal worth paying attention to. pic.twitter.com/Yww3IP4NKi

In short, many on the right who believe that the deep state is attempting to usurp President Trump and remove him from the White House finally received some evidence to support their claims. But unfortunately for them, the evidence isn’t from declassified FISA orders and even, for the more conspiratorial, from FEMA text messages. It’s from the “failing New York Times,” and anonymous sources. And that’s mitigating much of what might otherwise be a breathless call for Rosenstein’s firing.

Here’s who won at the 2018 Emmy Awards
The US embassy in the UK is telling Americans to “keep a low profile” during Trump’s visit
What Mike Pence’s public health record says about his ability to lead on coronavirus
The Hate U Give is equal parts coming-of-age drama and Black Lives Matter primer. It’s terrific.
Immigrant advocates say a 6-year-old migrant was abused in government custody
Why Angela Merkel’s successor resigned