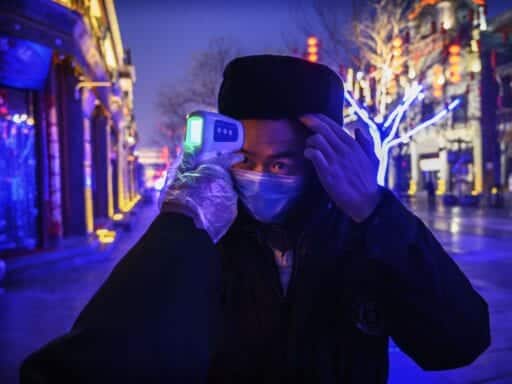 The coronavirus is putting a lot of new tech, including robots and artificial intelligence, on display.

The novel coronavirus that first appeared in mainland China has now spread across the world, with more than 82,000 reported cases and nearly 3,000 deaths, as of Thursday. And right alongside the outbreak is the deployment of myriad types of AI-powered tech that is now being put on full display.

New technology like infrared thermometers — potentially unreliable devices known as “thermometer guns” — are becoming increasingly commonplace in China, where health workers regularly check people’s temperatures. Somewhat behind the scenes, however, more futuristic technology powered by artificial intelligence is helping to identify coronavirus symptoms, find new treatments, and track the spread of the disease. Meanwhile, robots are making interactions with and treatment of sick patients easier. Powerful surveillance tech — including facial recognition-enabled cameras and drones — is also helping find people who might be sick or who aren’t wearing masks.

For now, most of this tech has been deployed in China, though it’s worth keeping an eye out for it elsewhere. Like the virus, the deployment of this next-generation tech is bound to spread.

Coronavirus has cleared the way for robots and drones

Coronavirus is contagious and hard to contain, which means that it’s safer for many human-to-human interactions to be done remotely. Both in hospitals and in public, remote communication means that patients avoid transmitting the disease and health workers save time on simple tasks. This has cleared the way for robots and lots of other automated technologies to help out. Now, robots are being used to disinfect rooms, communicate with isolated people, take vital information, and deliver medications (and anything else someone might need).

Near Seattle, for instance, a robot helped doctors treat an American man diagnosed with the novel coronavirus. The robot, which carried a stethoscope, helped the patient communicate with medical staff while limiting their own exposure to the illness.

Meanwhile, Chinese hospitals are now shipping in robots from the Danish company UVD Robots that can disinfect patient rooms, according to a statement. UVD Robots says that its roving robotic pods work by emitting ultraviolet light throughout an area, killing viruses and bacteria, including the coronavirus. (The robots are remotely controlled by a device operated by a health worker.)

Self-driving vehicles are even delivering supplies to medical workers in Wuhan. As CNN noted, the Chinese e-commerce company JD.com has been moving packages short distances to a hospital.

Flying robots, also known as drones, are also in the mix. Shenzhen MicroMultiCopter said in a statement earlier this month that it is deploying drones to patrol public places, spray disinfectant, and conduct thermal imaging. Chinese officials have used drones to track whether people are traveling outside without wearing face masks or violating other quarantine rules. More on this surveillance trend in a second.

Public health data surveillance companies Metabiota and BlueDot were both used to track the initial outbreak of the novel coronavirus. BlueDot actually notified its clients of the coronavirus threat several days before both the World Health Organization and the Centers for Disease Control and Prevention (CDC) issued their public warnings. Now, the same type of technology continues to monitor social media posts and other publicly available content to look for signs of the disease’s spread, as Wired has reported.

AI is also lending a hand in diagnosing the illness. Several hospitals in China are using AI-based software from the company Infervision to scan through CT images of patients’ lungs to look for signs of Covid-19, the infection caused by the novel coronavirus.

At the same time, the coronavirus epidemic has also inspired several drug companies to use artificial intelligence-powered drug discovery platforms to search for possible treatments. That process can involve using AI to find entirely new molecules that might be capable of treating the pneumonia-like illness, or mining through databases of already-approved drugs (for other illnesses) that might also work against Covid-19.

Importantly, while AI drug discovery might speed up the process of finding candidates for new drugs and treatments, there’s no guarantee that the technology will come up with anything better than what human scientists could find on their own.

As Covid-19 has put much of this technology on display, it’s also presented another justification for surveillance technology: the risk of a pandemic. This idea is not what you typically hear from either proponents or critics of this potentially invasive tech.

At the same time, companies that sell facial recognition are using the outbreak as an opportunity to push their own tech’s capabilities. As Quartz reported, China’s SenseTime now boasts that its software can identify people without face masks on. And on Twitter, at least one company — Remark Holdings — cited the coronavirus while pushing that its software’s ability to detect whether people were wearing masks was better than that of Chinese company Baidu.

Remember, just last year the Hong Kong government tried to ban wearing face masks in public assemblies in order to stifle pro-democracy protesters. Now, the Chinese government is urging manufacturers to boost production of masks, hoping to slow the coronavirus spread in China, where the illness has hit the hardest. So while identifying people not wearing masks could protect public health, that capability also raises concerns about the further development of facial recognition that works whether people are wearing masks or not. This stands to make the technology’s threat to civil liberties even worse.

The coronavirus epidemic has also inspired facial recognition companies to integrate their tech with thermal imaging. This type of scanning is being used to sense whether people might have elevated temperatures, which might indicate whether they’ve been infected with the coronavirus and help verify their identity. SenseTime is selling thermal imaging-enabled facial recognition, and so is Sunell, another China-based video surveillance company, according to a press release.

Meanwhile, in Thailand, a biometric border screening system is now using fever-detecting cameras, according to the company providing that technology, Germany-based Dermalog.

What’s more, facial recognition sellers are also using coronavirus to push the idea that touch-free biometric systems are safer than, say, using a key or a fingerprint to enter a building. This concept isn’t necessarily incorrect, as the CDC says it may be possible that the coronavirus could be spread by contact with infected surfaces, like a fingerprint scanner. As such, Remark Holdings released a statement claiming that facial recognition is safer than other forms of biometric authentication, like fingerprinting, because it “removes the chances of disease being spread through human-to-surface contact.”

In many ways, all of these newer, more advanced technologies stand to help combat the coronavirus outbreak. But there’s also something dystopian about an outbreak being used as justification for more surveillance.

Proponents of surveillance tech focus on threats to peoples’ safety and property, pointing to “dangerous” people like terrorists and sex offenders. Less often, however, do proponents of this technology point to the safety risks associated with a potential pandemic. But now critics of surveillance tech — who have typically argued that the technology threatens our civil liberties and sometimes doesn’t even work — will likely have to push against a different argument: severe threats to public health. It’s ultimately unclear how the public will react to the shifting role of surveillance.

So the robots and the AI won’t necessarily save us, but they might help. Meanwhile, the old-fashioned approaches to staying healthy help, too. Make sure to follow the CDC’s instructions for keeping yourself and your family members healthy, such as washing your hands and staying away from sick people — which is not particularly high-tech.

The rise of daily fantasy and sports betting has created an economy of its own
Why Trump’s inauguration money is a major part of Mueller’s Russia investigation
Donald Trump’s history of encouraging hate groups and violence, from 2015 to 2020
The US intel chief just said Russian interference is “continuing”
It took a pandemic for cities to finally address homelessness
America’s bad paid sick leave policy could make the coronavirus outbreak worse