“Corruption is breaking our democracy”: Elizabeth Warren’s case for the White House 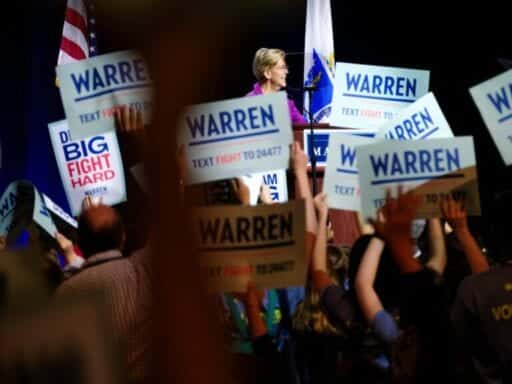 Share
Loading...
Elizabeth Warren at an event Massachusetts in September 2019, days before she delivered a major anti-corruption speech in New York City. | Photo by Preston Ehrler/SOPA Images/LightRocket via Getty Images

“I’m not afraid, and you can’t be afraid, either,” Warren told supporters at a rally in New York City’s Washington Square Park.

Elizabeth Warren delivered a major speech on the devastating effects of corruption in Washington Square Park in New York City. In the backdrop was the former site of the Triangle Shirtwaist Factory, where a fire on March 25, 1911, left nearly 150 workers dead, many of them immigrant women and girls.

“It took 18 minutes for 146 people to die. Mostly women. Mostly immigrants — Jewish and Italian. Mostly people who made as little as $5 a week to get their shot at the American dream,” Warren told the crowd, which filled most of the park in lower Manhattan. “It was one of the worst industrial disasters in American history. One of the worst, but it should not have been a surprise.”

She delivered the speech on the same day she unveiled a wide-ranging anti-corruption package she says will be her first legislative priority if she’s elected president, laying out how corporate interests and government lapses led to the deadly blaze. Factory workers for years complained about dangerous conditions and asked for better hours and higher pay, but they didn’t get it. The tragedy was likely preventable: the exit doors in the factory were locked, so the women inside couldn’t escape.

Warren doesn’t just believe corruption is bad for democracy — she views it as a mortal threat to every single aspect of society. The Massachusetts Democrat laid out her case against the forces at work against everyday people. It is, at its core, the case for her candidacy.

Warren sought to place the urgency of the current moment and the argument for her White House bid in historical context with her speech.

“Climate change. Gun safety. Health care. On the face of it, these three are totally different issues,” Warren said. “But despite our being the strongest and wealthiest country in the history of the world, our democracy is paralyzed. Why? Because giant corporations have bought off our government.”

She also took a swipe at President Donald Trump, characterizing him as “corruption in the flesh,” but emphasized the problem is much bigger than just him. “We need to take a deep breath and recognize that a country that elects Donald Trump is already in serious trouble.”

Washington Square Park is in a high-traffic part of the city, meaning the rally crowd was a mix of Warren supporters, people trying to hang out in the park, and people trying to walk through it. Ben, a 24-year-old student at NYU, heard about the rally earlier in the month but had forgotten it was happening until he was on his way home after school. (I got the sense this was part of the plan on the Warren team’s part — people see the event’s happening and decide to stay.)

Ben said he hasn’t decided which 2020 candidate to back yet, but Warren is probably his top pick so far. “Elizabeth Warren is a strong, policy-minded candidate who not only had clearly thought about various policies in detail, but has come to what I think is a good position on most of them,” he said. “I haven’t specifically pored through her policy proposals, because there are 100,000 of them.”

Warren’s litany of plans on basically anything and everything has become a signature element of her presidential bid. “Warren has a plan for that,” is one of her campaign mottos. Her speech is meant to accompany Monday’s anti-corruption package. (You can read Vox’s Ella Nilsen’s full explainer on that here.)

The senator, unsurprisingly, on Monday touted her plans. She mentioned her plans to impose a wealth tax, end lobbying, and strengthen unions, among others. The former Harvard professor and bankruptcy expert has put the image of a rigged system at the center of her presidential bid, but it’s a belief she has held for years. She gained national prominence in American politics for her blistering criticism of Wall Street and politicians on both sides of the aisle in the wake of the financial crisis.

“Corruption has put our planet at risk. Corruption has broken our economy. And corruption is breaking our democracy,” Warren said on Monday. “I know what’s broken, I’ve got a plan to fix it, and that’s why I’m running for President of the United States.”

Yoruba Richen, a 48-year-old documentary filmmaker, said she’s been a fan of Warren since the days of the Consumer Financial Protection Bureau, the government agency Warren conceived of and pushed to set up. “We need to overhaul this whole system, some of us, especially people of color, working-class people, have known this forever, it’s nothing new. And she’s really the first time I’m seeing in such a very real way, really taking on and changing the system, or trying to,” she said.

She conceded that she also likes Bernie Sanders, the other progressive in the 2020 race, but he’s not quite what she’s looking for. “I’ve always liked Bernie,” she said. “But I think with Elizabeth, she’s got real-world experience in doing stuff. Also, quite frankly, these white guys have fucked up this country for so long.”

Warren told a story about a woman in history with ferocity — carefully choosing a historical figure that has a special place on the left.

Warren spoke of Frances Perkins, a workers-rights advocate who became the first woman to serve in a presidential candidate under Franklin D. Roosevelt. Perkins witnessed the Triangle Shirtwaist Factory fire, and it was a pivotal moment for the course the rest of her life would take. While she was already an activist at the time, the tragedy propelled her to throw herself full-force into politics, first at the state level in New York, and then at the national level.

“What did one woman — one very persistent woman — backed up by millions of people across this country get done?” Warren asked the crowd. “Social Security. Unemployment insurance. Abolition of child labor. Minimum wage. The right to join a union. Even the very existence of the weekend. Big, structural change. One woman, and millions of people to back her up.”

It’s not hard to see the parallel between Perkins and herself Warren was trying to draw here.

She invoked other historical comparisons of Americans who “have been told that it wasn’t possible to make big, structural change” and fought back — the abolitionists, the suffragettes, union organizers, civil rights and LGBQ activists. “But they didn’t give up. They organized. They built a grassroots movement. They persisted. And they changed the course of American history,” Warren said.

Warren’s use of the word “persist” is not by accident. “Nevertheless, she persisted,” a phrase used by Senate Majority Leader Mitch McConnell (R-KY) about Warren in 2017, has become a battle refrain of Warren’s world, more broadly, of many American women. Alanna, 28, a psychologist from the Upper West Side at the rally was wearing a “Nevertheless, she persisted,” shirt. She said she had seen a sign for the rally on the Upper West Side and decided to come to the park to check it out.

“I think we’ve seen her do some incredible things,” she said. “She talks with such poise and calm, and I think that’s something that I look for in a candidate, who can talk about their plans and their experiences most calmly and eloquently.”

Met a girl at the Elizabeth Warren rally who found out about it from a sign posted on the Upper West Side, like in the olden days. pic.twitter.com/OYfgpEQtE5

Warren, the first major candidate out of the gate in the 2020 primary, has been gaining momentum throughout the summer. At this point, the Democratic race is largely a three-way contest between Warren, Joe Biden, and Bernie Sanders. On Monday, Warren picked up the endorsement of grassroots political activist group the Working Families Party, which backed Sanders in 2016. WFP national director Maurice Mitchell introduced her at the New York rally.

Warren has not built out a grassroots movement behind her that rivals the one behind Sanders, but it appears she’s trying to change that. “I am not afraid,” she told supporters on Monday, “and you can’t be afraid, either.”

Why Tucker Carlson pretends to hate elites
Teen Titans GO! to the Movies is a candy-colored cure for superhero-movie fatigue
Netflix’s Feel Good is a romcom about what happens after the romcom
The FBI released records on Carter Page surveillance. It thought he was being recruited by Russia.
4 health care questions, besides Medicare-for-all, every 2020 Democratic candidate should answer
Lockdown lifted in Wuhan, America’s largest single-day death toll: Wednesday’s coronavirus news