Cory Booker was asked about veganism at the debate. He missed an opportunity. 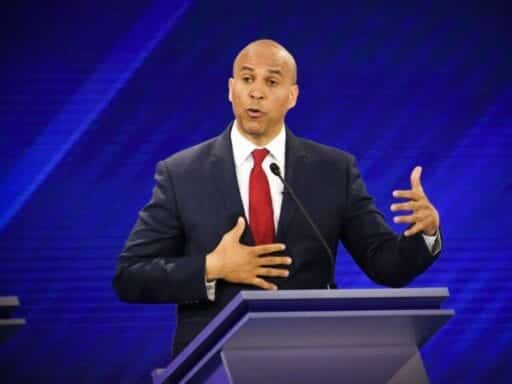 Why didn’t he seize the chance to talk about his animal welfare plan?

“You are a vegan since 2014, and that’s obviously a personal choice,” moderator Jorge Ramos said to Sen. Cory Booker during the Democratic debate. “Should people follow your diet?”

It was a question that seemed to come out of nowhere. Booker looked surprised by it, which makes sense — when’s the last time you remember veganism getting airtime in a presidential debate? But he quickly recovered and gave his answer: No.

Then, very briefly, he talked about the factory farming system that supplies most of the meat we eat, a system that subjects animals to such cruel conditions that there are laws to keep the mistreatment hidden from public view. In the US, a small number of corporations controls most of our meat production and squeezes out small farms.

“One of the reasons that I have a bill to put a moratorium on this kind of corporate consolidation is because this factory farming is destroying and hurting our environment, and you see independent family farmers being pushed out of business because of the kind of incentives we are giving that don’t line up with our values,” Booker said. “That’s what I’m calling for.”

And that was it. “But I want to switch,” he continued, and turned the discussion to US war veterans, making the inarguable point that they deserve better care.

It’s understandable that Booker didn’t dwell too long on the veganism question; perhaps he didn’t want to risk alienating voters by coming off as preachy. Telling everyone that they should give up all animal products would probably not have played well, especially since the debate took place in Texas, which raises more cattle than any other state in the country.

But Booker missed a golden opportunity to talk about his animal welfare plan. If you haven’t heard about it, you’re not alone — the plan appears on Booker’s website, but he hasn’t really been hyping it.

By contrast, last month Julián Castro rolled out his own plan for animal welfare — which is much more comprehensive than Booker’s — and he savvily framed it as a way of sticking it to President Trump. “This groundbreaking plan will undo Donald Trump’s damage,” Castro said. His Protecting Animals and Wildlife plan would strengthen the Endangered Species Act, which Trump has weakened. And it would stop Americans from importing animal trophies that result from big-game hunting — something Donald Trump Jr. is known to love.

It’s good policy as well as smart politics. Americans are increasingly concerned with animal welfare. The incredibly rapid embrace of plant-based meat products like Impossible Burgers and Beyond Meat is, in part, attributable to a growing sense that we can and should be inflicting far less suffering on animals.

A 2015 Gallup poll found that 62 percent of Americans said animals deserve some legal protections. Another 32 percent — nearly one-third — expressed an even stronger pro-animal stance, saying they believe animals should get the same rights as people. In 2008, only 25 percent voiced that view.

It seems more and more Americans are coming to see animals as part of our moral circle, the boundary we draw around those we consider worthy of ethical consideration. Castro, aware of that trend, is leveraging it to the advantage of animals — and his candidacy.

Booker should’ve done the same. After all, he has a strong record on animal welfare issues. As his own website says:

Cory has led his colleagues in the Senate in blocking appropriations riders that sought to undermine the Endangered Species Act and delist vulnerable species such as Grey Wolves and Grizzly Bears, and he has introduced legislation that would require federal facilities to comply with the minimum standards of care in the Animal Welfare Act.

When Cory helped write a major update to our federal chemical safety law, Cory worked for over a year to include new limits on animal testing in the bill — and it is estimated that these protections will save hundreds of thousands of animals from needless suffering. Cory has also introduced a bill to extend federal prohibitions on animal fighting to the U.S. territories and got it passed into law in the final 2018 farm bill, saving thousands of animals every year from suffering and dying.

Plus, Booker’s animal welfare plan contains some worthy ideas, any one of which it would have been great to mention. Here are a few notable examples from his website:

Booker could’ve helped bring mainstream attention to these ideas by devoting even a minute or two to them during the debate. Had he leaned into the moderator’s question, he also could’ve presented himself as a leader on an issue that’s increasingly attracting American voters’ concern. Unfortunately, he shied away from the moment.

After Trump supporters surround a Biden bus in Texas, the FBI opens an investigation
How Silicon Valley’s secretive donor group plans to beat Trump
The United Nations is trying to pressure the world into faster action on climate change
Bernie Sanders and Elizabeth Warren to Jeff Bezos: Overhaul Amazon’s “profit-at-all-costs culture”
Why Bernie Sanders and AOC are targeting public housing in the first Green New Deal bill
Jeff Sessions is pushing asylum officers to reject more migrants. Will they go along?