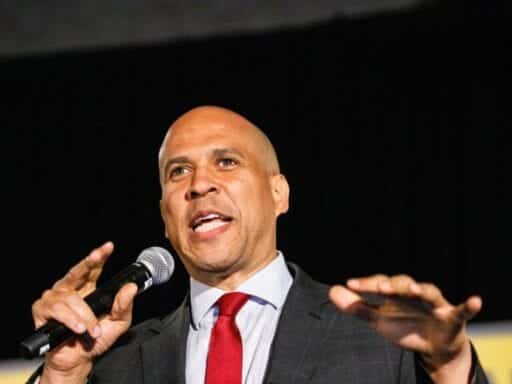 Presidential hopeful Sen. Cory Booker has united policies he proposed during his time in Congress into a new affordable housing plan, which he unveiled while on the campaign trail late last week.

Booker has made affordable housing central to his campaign, and often tells the story of his parents’ struggle to buy a home in stump speeches. He told that story once again in an op-ed published in the Reno Gazette Journal that promotes the plan.

“Fifty years ago this month, a couple and their young family were looking to move into a neighborhood in New Jersey with great public schools, but real estate agents refused to sell them a home because of the color of their skin,” Booker wrote. “[Local activists] stood up against the illegal housing discrimination the couple faced — and they won. The couple’s names were Cary and Carolyn Booker — my parents.”

Booker credits his later successes to that early victory, and writes that his plan would help ensure Americans across the country have access to the opportunities he enjoyed as a child. The proposal seeks to do this in a few ways: with a tax credit to renters, a baby bond program, federal incentives for affordable housing, protections against eviction, and strategies to reduce homelessness.

1) A tax credit for renters

Recent research suggests renters in the US — particularly renters earning minimum wage — are struggling. In a 2018 report, The National Low Income Housing Coalition found the average American being paid minimum wage would have to work 99 hours a week to afford a one-bedroom apartment at fair-market rent.

A 2018 Harvard University report found nearly half of those who rent spend more than 30 percent of their income on housing. In its guidelines for who qualifies for affordable housing, the Department of Housing and Urban Development writes that spending more than 30 percent of a household’s income on housing makes it difficult to afford other necessities, such as food and health care.

Booker’s plan works to lessen the burden on renters by granting those who spend more than 30 percent of their pre-tax income on rent a tax credit equal to the difference between their rent and their earnings. Booker claims the plan would bring 9.4 million people out of poverty, and that families receiving the benefit would get a median tax credit of $4,800.

This element of Booker’s plan mirrors legislation he introduced last August. Called the HOME (Housing, Opportunity, Mobility, and Equity) Act, the bill sought to tackle affordable housing using a very similar framework. It did not advance in the Republican-controlled Senate.

2) A housing investment made at birth

Before he entered the presidential race, Booker advocated for “baby bonds,” savings accounts opened for every child upon birth, each containing $1,000. Low-income children would have up to $2,000 a year added to the account (the amount added would be less for children in higher-income families) until they turned 18.

Speaking with Vox’s Sarah Kliff about baby bonds in 2018, Booker said, “It would be a dramatic change in our country to have low-income people break out of generational poverty. We could rapidly bring security into those families’ lives, and that is really exciting to me.”

The candidate estimates that by the time they turn 18, low-income children would have nearly $50,000 to invest in a down-payment on a home. The plan would be paid for by “simply restoring 2009-era estate tax rules and closing loopholes that allow wealthy households to avoid paying taxes on investments held at death,” he said.

According to reporting by Vox’s Dylan Matthews, Booker’s baby bond program could have a profound impact on the racial wealth gap:

New analysis by Columbia postdoctoral researcher Naomi Zewde looks at what kind of effect such a nest egg would have on our racial wealth gap. It’s a pretty stark divide: Zewde estimates that in 2015, the median white person aged 18 to 25 had a net worth of $46,000. The median black person, by contrast, had a median net worth of $2,900. That’s a ratio of 15.9: White young people were nearly 16 times richer than their black counterparts.

As Curbed’s Diana Budds reported, there is a dearth of affordable housing in the US, and the federal government has struggled to help renters: “There’s a shortage of 7.2 million affordable units for low-income households. For every 100 renters in need, there are only 35 homes available. Meanwhile, existing federal assistance programs are ineffective: 76 percent of people eligible for housing assistance don’t receive it.”

And with that stick comes a carrot: His plan increases federal transportation funding to cities that do show they are making housing more accessible to low- and middle-income people. Some policies that might do the trick, Booker said, “include reduced restrictions on lot size, fewer parking requirements, and allowance of accessory dwelling units and multi-family homes, among others.”

As is the case with the tax credit element of Booker’s plan, the senator’s HOME Act served as the blueprint for affordable housing incentives. The bill sought to address land use restrictions by encouraging changes to local policy, including the removal of height restrictions, permit process reform, and the elimination of parking requirements.

Budds’ reporting found more than 1 million households faced eviction in 2016, and Booker hopes to help those individuals who find themselves in this situation.

The candidate wants to guarantee a right to legal representation for people facing eviction, make it illegal for landlords to “blacklist” renters who have gone to landlord-tenant court (regardless of whether they won or lost their cases), and reverse Trump administration policy on fair housing protections.

In most states, people facing eviction do not have the right to a lawyer if they can’t afford one. According to a 2010 study, 90 percent of landlords have legal representation and only 10 percent of tenants do. A 2015 University of Wisconsin study found tenants who aren’t represented by a lawyer are more likely to be evicted than those who are.

Booker proposes creating a “national Eviction Right to Counsel Fund” that will give federal funds to states that enact laws guaranteeing low-income people the right to legal counsel in eviction proceedings.

5) Aid for the homeless

The senator also proposes two major changes to tackle homelessness: He promises $6 billion in funding for the Department of Housing and Urban Development’s McKinney-Vento Homeless Assistance Grants program. That amount more than doubles the current fiscal year’s investment of $2.64 billion.

He further pledges to make the US Interagency Council on Homelessness permanent. Booker and homelessness advocates say the council, which helps coordinate federal spending on initiatives created to help homeless people, is in jeopardy of losing funding every year because of a sunset clause in the legislation that created the program.

Cory Booker isn’t the only candidate to advocate for housing reform in the Democratic 2020 presidential primary campaign.

Sen. Kamala Harris has a proposal that would provide rental credits to those earning less than $125,000 per year. And Sen. Elizabeth Warren has a plan that would put $500 billion over the next ten years into funds for maintaining affordable housing.

As is the case with many plans presented by 2020 candidates, some of Booker’s proposals — such as his tax credit for renters — would be subject to Congressional approval. Should Republicans retain control of the Senate, enshrining such proposals in law would be difficult. Other aspects of the senator’s plan — such providing executive branch guidance on who qualifies for fair housing protections — do not require the legislative branch, however. Should he become president, Booker could (and he says he would) make these proposals a reality on his first day in office.

“I couldn’t imagine all of the things that have happened”: What Marie Yovanovitch told impeachment i...
The past 24 hours in Syria news, explained
This filmmaker spent months interviewing neo-Nazis and jihadists. Here’s what she learned.
Please don’t go to Hawaii on a “corona vacation” right now
Most Americans think social media companies are censoring people
Networks of self-driving trucks are becoming a reality in the US