Could Hillary Clinton really be thinking about another presidential run? 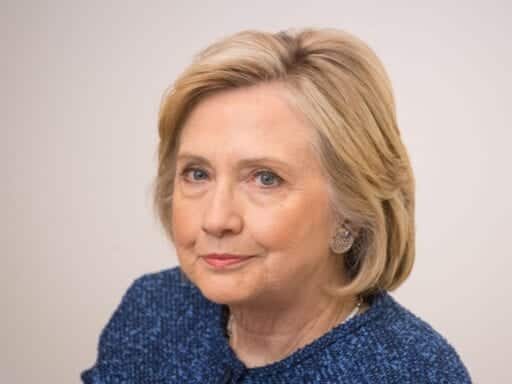 Sure, she could be. Whether she’d actually go through with it is a different question.

Two recent comments have fanned speculation that Hillary Clinton might be thinking about running for president again in 2020 — though some of her allies are now trying to throw cold water on the idea.

During an interview with Kara Swisher for the Recode Decode podcast published Saturday, Clinton said she didn’t want to run for president again, but added, “I’d like to be president.” She then proceeded to recite her résumé, explaining how she feels “very well prepared” for the “work” that awaits a new Democratic president in 2020, before saying that she’s “not even going to think about” all this until after the midterm elections.

This came just a week after a Politico magazine piece in which longtime Clinton loyalist Philippe Reines made the case for why — hypothetically — Clinton would be a strong 2020 presidential candidate, and notably estimated the chances she would run as “somewhere between highly unlikely and zero” but “not zero.”

However, the Hill’s Amie Parnes, a reporter who’s well-sourced in Clintonworld, wrote Monday that she is “not running for president again,” per her “longtime advisers and confidants.” One anonymous confidant told Parnes, “It’s not a real thing,” and Reines clarified to her that Clinton is “more likely to win Powerball” than to run.

Former Virginia Gov. Terry McAuliffe (D-VA), a longtime Clinton friend, also said on MSNBC: “I feel confident in saying I think Hillary is never going to be on the ballot again.” (However, we should note that McAuliffe may have a conflict here, since he has been sometimes mentioned as a 2020 candidate himself.)

So what to make of all this? It could, in some sense, be a trial balloon from the Clinton camp, truly meant to gauge what the reactions for another run would be. Or it could indeed all be a whole lot of hoopla over nothing — overscrutinizing two comments that were meant to be a little cute.

The past history of general election losers running again

To get a sense of what a heavy lift another Clinton campaign would be, the modern history of losing general election nominees coming back for another try is not a rosy one.

Yes, there is Richard Nixon, who lost as the GOP nominee in 1960 but was renominated and won eight years later. But beyond that, you have two-time nominees and two-time losers (Adlai Stevenson and Thomas Dewey), a three-time nominee and three-time loser (William Jennings Bryan), and others who ran again after losing the general election but couldn’t even win the nomination (Hubert Humphrey and George McGovern).

But what we have seen repeatedly is that some of those losing nominees have considered running again — like Al Gore did in late 2002, John Kerry did in early 2007, and Mitt Romney did in January 2015 — before eventually deciding not to.

The Romney example is particularly instructive:

What happened in those few weeks was, essentially, that Romney got a ton of unenthusiastic feedback from party insiders — staffers, admirers, donors, and politicians. The general sentiment was that the GOP should give someone new a shot. It became clear that Romney would not start as the clear insider favorite, and so he soon decided not to run.

As I wrote at the time, it was a seeming vindication for the “Party Decides” theory about how presidential primaries work. Though Romney was leading in polls of the GOP field, what he cared more about was that feedback from insiders, and it was tepid enough to persuade him that another run would be a bad idea. Clinton could well get the same sort of feedback and come to the same conclusion.

It’s up to Clinton in the end

Still, the Trump example should remind us that the decision of whether Clinton will run or not is truly up to her in the end, not party insiders. Clinton is of course a very different type of candidate than Trump, but Trump shows it is possible to defy the judgments of party elites and win anyway.

So what is Clinton thinking now? Well, judging by her interview with Swisher, Clinton continues to believe she would have won if not for Russian interference and then-FBI Director James Comey. (Her book What Happened also assigns a fair share of the blame to Sen. Bernie Sanders (I-VT).)

Meanwhile, she and former president Bill Clinton are going on a speaking tour that is currently scheduled to wrap up in May 2019. That timing is interesting, since she announced her last run in June 2015. It will give her a platform to comment on the early months of next year’s presidential race as it is unfolding, as well as making the couple some money.

If Clinton were to run, of course, it would hugely reshape the (currently rather inchoate) Democratic field. She has surely noticed that no one Democratic candidate appears to have yet broken out. Joe Biden and Sanders are the poll leaders lately, but she’s beaten both of them before (Biden during her second-place 2008 finish, and Sanders in 2016). And though Clinton’s favorability numbers among the general public are at a record low, 77 percent of Democrats still view her favorably, per Gallup.

It does seem clear that party elites have little appetite for another Clinton run, and that she’d start off in a worse position than she was last time around. Clinton could well conclude that she can’t win without those insiders. Then again, she could think that she has name recognition, perfectly adequate fundraising ability, and the loyalty of millions of Democratic voters who thought she was robbed.

As Trump’s run and primary victory despite little GOP elite support should remind us, the choice of whether to run is an individual one in the end. Whatever Clinton’s current thinking, though, it’s clear that she has no plans to retreat to a comfortable retirement, and wants to continue to be a major voice shaping the Democratic Party for years to come.