Crazy Rich Asians: 5 things to know about the effervescent rom-com 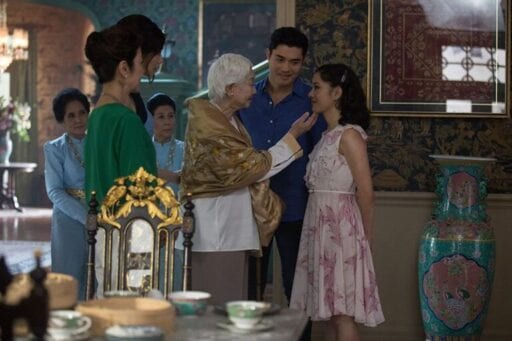 But the phrase Crazy Rich Asians fails to convey just how fun and sweet this film is. Perhaps a more appropriate, if prohibitively lengthy, title would be “The Best Movie About Asian People in Decades and the Best Rom-Com of the Summer.”

The story, which follows the coupling of Rachel Chu (Constance Wu) and Nick Young (Henry Golding), is Cinderella with a twist: The evil stepmother and stepsisters are on Prince Charming’s side of the family. And, well, Cinderella doesn’t know it yet. And, oh right — Cinderella is Asian-American.

Based on Kevin Kwan’s best-selling 2013 novel, which spawned two sequels, Crazy Rich Asians is the first major studio movie in 25 years to feature a cast that’s majority Asian-American and Asian. And none of them are playing scientists, martial artists, assassins, or courtesans — the kinds of roles Asian and Asian-American actors are frequently reduced to playing. Instead, Crazy Rich Asians is the rare American movie that allows Asian men and women to be objects of affection, glamorous wealthy villains operating in society’s most elite circles, and players in a sudsy, soapy tale of love and all its discontents.

But Crazy Rich Asians excels for reasons that go beyond its strides in representation. Before its release next week, here are a few more things to know about The Best Movie About Asian People in Decades and the Best Rom-Com of the Summer.

1) Crazy Rich Asians is an opulent feast for the eyes

Author Kevin Kwan’s 2013 novel Crazy Rich Asians was a major hit and a perfect summer read because of Kwan’s ability to paint a picture of luxury. The book is filled with delirious references to the plush, extravagant lives of Asia’s upper crust, but there’s a major difference between reading about the gowns being worn, the food being served, and the luxe Singaporean condominiums and actually seeing those things come to life.

It appears that director Jon M. Chu understood that. Chu — who knows his way around glittering spectacle from his work on the Step Up movies and Now You See Me 2 — has created a cinematic jewel box, each compartment brimming with jaw-dropping opulence and brilliant luster. On its surface, Crazy Rich Asians functions as a swooning lifestyle fantasy — a shimmering dispatch from sumptuous Asia to people who have never seen it for themselves.

At first glance, Crazy Rich Asians is luxury exhibitionism, and it’s thrilling to watch. But it’s made even more thrilling by the fact that there are thoughtful stories about parenthood, love, and fidelity lurking beneath that sheen.

Perhaps the most poignant story Crazy Rich Asians tells about Asian identity — one I honestly wish it delved into a bit more — is how many Asian Americans often feel as if we’re neither here nor there.

In America, the struggle for Asian Americans is often one of assimilation, of being seen as American, a struggle made even more difficult by the xenophobic undercurrent informing the nation’s current political climate.

Crazy Rich Asians shines a light on a related but less explored idea: that people in Asia don’t see American life as worth assimilating to. And the vision we get of their sophisticated, successful lives in this film suggests they might be onto something.

Rachel is faced with this split between her Asian and Asian-American identity. Even though she doesn’t seem like she should be an outsider with Nick’s family, she’s never fully accepted because of her American cultural identity. Some of the most affirming and thought-provoking parts of Crazy Rich Asians happen when it’s exploring this duality.

3) Constance Wu is a delight

Rachel is Crazy Rich Asians’ protagonist and also its least fun character — and that’s not a slight. Rather, it’s a challenge that Constance Wu (Fresh Off the Boat) rises up to meet.

Many of the film’s actors get to be splashier with their characters, like Michelle Yeoh as the icy and devastating Eleanor Young and Awkwafina (more on her in a bit) as Rachel’s buoyant best friend. But with the movie wrapped around Rachel, Wu has to be more human and less flashy than her co-stars, while also not disappearing in moments where she’s flanked by these big personalities.

And Wu delivers it. Crazy Rich Asians makes it crystal clear that she’s a savvy performer, calibrating just the right combination of vulnerability and backbone to give spirit to a character whose journey is more complicated than that of your typical rom-com lead.

4) You will fall in love with Awkwafina

The highest compliment I can give Awkwafina is that her performance is akin to Tiffany Haddish’s in Girls Trip (sans the raunch).

It’s unclear how much of her performance as the brash and bawdy Peik Lin was ad-libbed, or whether she won a bet with the rest of the cast and got all the best lines, but every time she’s onscreen, she’s the center of attention. She’s the spark that gives life to Crazy Rich Asians, revving up each scene she’s in with comedic snaps of energy. By the end of the movie, your brain will have been rewired to crave her appearances onscreen (there should be more of them!), so much so that when the film fades, you might find it hard to remember the scenes she isn’t in.

All this said, Crazy Rich Asians isn’t a perfect movie: The ending feels a little tacked on, and it doesn’t always deliver on its intriguing teases about the luxe life of Singaporean high society. (In this last respect, it’s a little reminiscent of The Devil Wears Prada, which did a similarly great job at mythologizing upper-crust luxury and a less great job depicting the Faustian kickback of what makes that life so ugly.) And Oliver (Nico Santos), the movie’s only gay character, is at times a shopworn cliché — stylish, nonthreatening, and nonsexual — that you’ve probably seen before.

But that’s not enough to hinder what a fun and joyful gem this movie is.

Crazy Rich Asians is a rare thing. Yes, it’s the first Asian-American-focused studio movie in more than 20 years, and for a lot of Asian-Americans who went through decades of not seeing themselves reflected in pop culture, the movie’s mere existence is a triumph. But that’s not what makes it great — its cast, its story, and its heart do that. And the fact that Crazy Rich Asians can be great on its own terms makes its existence even more special.

These are the popular ideas progressives can win with (and some unpopular ones to avoid)
4 ideas to replace traditional police officers
Kate Manne on why female candidates get ruled “unelectable” so quickly
The inescapable pressure of being a woman on Zoom
The year reality collapsed into pixels
Congress quietly gave 4,000 Liberians a path to citizenship