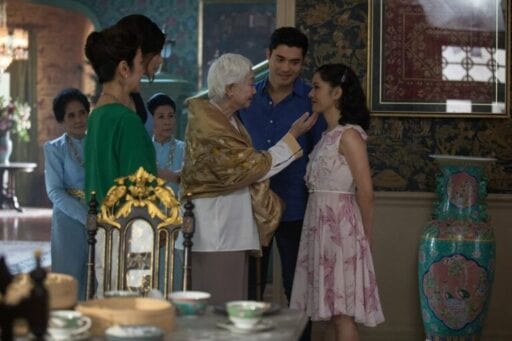 Share
Loading...
I’m not sure any Hollywood romantic comedy has hit the big screen bearing more expectations than Crazy Rich Asians. It’s the first contemporary English-language Hollywood movie with an almost all-Asian cast in a quarter-century (the last was 1993’s The Joy Luck Club). And in risk-averse Hollywood, that means the film’s reception has huge implications for Asian and Asian-American actors and filmmakers in all kinds of genres.

That’s a lot of pressure for any film, but especially a romantic comedy — a genre that’s been sidelined for the past decade and is still considered less artistically important than prestige dramas or big-budget action movies.

Thankfully, all that pressure has pressed this film into a diamond: Directed by Jon M. Chu, Crazy Rich Asians is fun, funny, gorgeous, and swoon-worthy. It’s got a terrific cast, glamorous locations, witty jokes, and a story with a lot of heart. And on top of all that, it may actually succeed in proving to Hollywood that both Asian-centered stories and romantic comedies deserve much more attention.

Crazy Rich Asians’ plot is a slimmed-down version of Kevin Kwan’s 2013 novel of the same name (which birthed a trilogy — hello, future film sequels), though it still crams a lot into its two-hour runtime. As adapted by Peter Chiarelli (The Proposal) and TV writer Adele Lim, the screenplay draws on some of the most beloved tropes of the romantic comedy. It’s got hints of Cinderella, which has provided a partial template for many a rom-com (Pretty Woman, Ever After, The Prince and Me, even the pretty terrible but much-watched Netflix movie A Christmas Prince).

There are hints of the lineage of Jane Austen here too — especially stories like Pride and Prejudice and Emma, which explore class in the midst of a swoony, clever romance. And those pieces share DNA with movies like Pretty in Pink, in which the spunky, self-assured heroine finds her own way in the world, and finds love in the process.

The result is a thoroughly recognizable romantic comedy, with many of the same tropes that rom-coms have used for decades. And yet it feels fresh too, because the story at its center is foreign territory for Hollywood both literally and figuratively. Rachel Chu (Constance Wu), a Chinese-American NYU economics professor, decides to spend spring break with her boyfriend Nick Young (Henry Golding), who’s going home to Singapore to be the best man in his friend’s wedding.

What Rachel doesn’t know is that Nick comes from a fabulously wealthy family, a thing she starts to realize when they’re ushered to their private suite on the airplane. But it soon becomes clear that his family and the social circle in which they move are far, far wealthier than anything she could have imagined.

Rachel was raised by a single mother who emigrated from mainland China to New York City, a far cry from the gilded, glitzy world Nick that brings her into. The Young family, which immigrated to Singapore from China centuries earlier, are “old money” rich, and basically own all the real estate on the island, as Rachel’s college roommate Peik Lin (Awkwafina) tells her. Their friends and relatives are all fabulously rich as well.

They’re also very close-knit. Nick has a couple of cousins with whom he’s friendly — uptight, image-obsessed business executive Eddie (Ronny Chieng) and movie director Alistair (Remy Hii) — but he’s closest to Astrid (Gemma Chan), who is richer than any of them by dint of parentage, and yet married Michael (Pierre Png), a self-described “commoner.” And though Nick is close to his mother Eleanor (Michelle Yeoh), he grew up living with his grandmother (Lisa Lu) at her estate, for which the only word is “palatial.”

Nick and Rachel haven’t discussed marriage, but everyone’s pretty sure that Rachel’s presence in Singapore for the wedding means a proposal is on the way. And that, of course, doesn’t sit right with everyone.

It’s a great setup for a joyous, eye-popping, dramatic spectacle — centered on a lavish wedding, no less — and Crazy Rich Asians probably could have left it at that and still been a huge success. As a number of critics have written, just seeing an all-Asian cast in complex roles is a game changer; the film challenges racial expectations and brings underrepresented voices before a huge audience.

But even setting aside its strides for onscreen representation, Crazy Rich Asians also succeeds as both a celebration and subtle subversion of the romantic comedy. It does what great romantic comedies do — makes you laugh, smile, cheer for the heroine, and root for love — but it also challenges some conventional expectations about Hollywood romantic comedies, and not just in its casting.

In Rachel, Crazy Rich Asians boasts a heroine who is not in any way portrayed as a hot mess. She has her personal and professional life together just fine. She has a healthy relationship with her handsome boyfriend, who loves her (even if he needs some schooling on conflict avoidance). She loves her mother and is loved by her in return. She is able to form warm relationships with other women, in particular the reliably delightful Peik Lin.

Rachel is wowed by Nick’s world, but she doesn’t succumb to its more outrageous charms. She never trips over her skirt or accidentally insults someone; the only social gaffe she commits while in Singapore is misidentifying one old woman as another. She is confident, competent, kind, respectful, and invested in her own family. And though Nick’s friends and family are certain she’s a gold digger, their relationship is genuine — Rachel was never after his money in the first place.

I cannot remember the last time I saw a rom-com in which this type of heroine even existed — maybe Pretty in Pink. Most rom-com heroines have to be a mess in one way or another. Her flaws might be obvious to everybody; Bridget Jones’s Diary is the clearest example, with a story that hinges on its heroine trying to get her act together. Or they think they have the world by the tail, but in fact they’re secretly a wreck, as in How to Lose a Guy in 10 Days or 10 Things I Hate About You. It’s part of the genre.

You’ve Got Mail’s Kathleen Kelly is a business owner, but her business is going under, and her relationship with her boyfriend is as well. It’s at least clear to us that Sally loves Harry. Julianne Potter comes awfully close to wrecking her best friend’s wedding because she’s been so out of touch with her feelings. Even Set It Up, the most recent entry into the genre, features a millennial heroine who works so much that her personal life is entirely nonexistent.

So it’s refreshing to watch a movie that can get along fine with a heroine who doesn’t need saving. She just wants to continue loving Nick, who loves her back. Crazy Rich Asians is a groundbreaker for lots of reasons, but having a woman at its center who grows and becomes stronger without compromising her own moral center in the midst of unimaginable glamour is one of them.

And if the Hollywood rom-com is indeed making its glorious return with this film, I hope we’ll soon be treated to a lot more of the same.

The case for raising kids in the city
What the US gets wrong about the minimum wage
Eric Greitens' nonprofit was 'criminal enterprise,' but committee must end: Mo. lawma...
Dems are unified on immigration now. Will they still be when Trump is gone?
Mitch McConnell’s stunning Supreme Court success
Sen. Maggie Hassan suspends intern for yelling vulgarity at President Trump