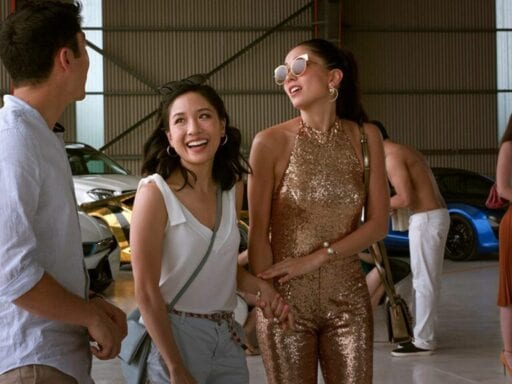 The movie made $25 million in its second weekend.

Crazy Rich Asians isn’t going anywhere. Over the weekend, the hit rom-com brought in an estimated $25 million at the domestic box office, taking the top spot and dropping less than 6 percent from its opening weekend.

That small week-over-week decline is considered a good sign that the movie has legs. Movies often have huge drops from their first to second weekend, especially mega-hyped blockbusters that have huge openings. Case in point: Warner Bros., the studio behind Crazy Rich Asians, saw Batman v Superman: Dawn of Justice drop 69 percent from its first to second weekend, and Suicide Squad had a decrease of about 67 percent. Wonder Woman was considered a success because it only dropped 45 percent in its second week. And CNN points out that Disney’s Incredibles 2 dipped about 56 percent between its first and second weekend earlier this summer.

Of course, these are blockbuster superhero movies with giant opening weekends, which create such a high bar that inevitable death drops occur in the second weekend. But though Crazy Rich Asians’ opening take was substantially smaller, its slim second-week swoon, bolstered by great reviews and strong word of mouth, indicates a slow but steady momentum that bodes well for the movie’s continued success.

The movie has now brought in an estimated $76.8 million domestically, more than double the reported $30 million it cost to make the film. That haul will only continue to swell as the film starts its slow rollout in overseas markets: It took in more than $7 million in international box office this weekend — including $1.8 million in Singapore, where much of the film is set, making it the largest opening for a romantic comedy ever in that market.

And now, with confirmation that a sequel is already in development, it’s clear that Crazy Rich’s success story is still being written.

An unusually honest conversation about wielding political power, with Rep. Pramila Jayapal
Virginia’s state legislature elections are Democrats’ first big enthusiasm test before 2020
Exploring the history of seduction, from Casanova to Tinder
The boldest and weakest labor platforms of the 2020 Democratic primary
You, now streaming on Netflix, tilts the rom-com into postmodern horror
How to build a circular economy that recycles carbon