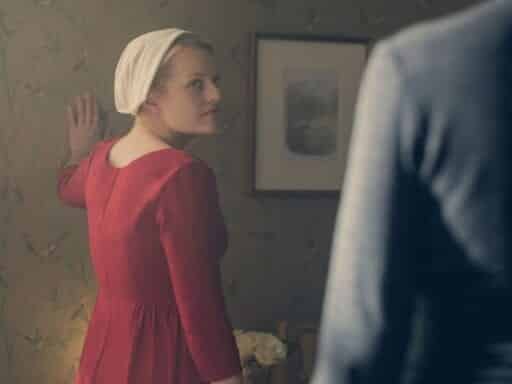 One of the great joys of loving a movie or show is indulging in the merchandise that comes with it. But as we all know, brands can and will do too much. On June 10 People announced that Lot18 would release a line of The Handmaid’s Tale-inspired wines — that is, a line inspired by a show about a totalitarian government built on the oppression, ceremonial rape, and abuse of women.

Unlike the fortunes of the Republic of Gilead, the wine’s rise and fall was swift; by that evening, it was canceled.

While there might be something to be said for a wine meant to be consumed as consolation while watching one of the most notoriously emotionally stressful shows currently airing, Lot18’s marketing went in a slightly different direction. The wines were each named after a character on the show, and their descriptions, while apt for wine, seemed just a teeny tiny bit inappropriate as tie-ins for the show.

Offred, a Pinot Noir named after Elisabeth Moss’s character, was described as “seductive and appealing,” with the label noting it was “useless to resist” and “you may as well give in.” This takes on a whole new meaning when applied to a show that features state-sanctioned rape. Ofglen, named for Alexis Bledel’s character, who is similarly abused and then sent to a labor camp, was advertised with the phrase: “Pleasure and enjoyment may be forbidden in Gilead, but it can certainly be found in this memorable wine.” (The Ofglen wine was also described as being good for “enjoying with friends.”)

Just as strange was the description for Serena Joy, a white wine named after Yvonne Strahovski’s character. “Don’t judge this wine too quickly,” Lot18’s website warned about a wine named for a character who, while oppressed by the system, has also used and supported it to oppress women around her. It’s “approachable,” Lot18 said, adding that being wary of it might make you “miss out on a sublime experience.”

Social media backlash immediately followed the wine’s announcement, and this seems to have been the driving force behind the wine’s cancellation.

Finally a product that combines everything I hate: wine, marketing, unbridled capitalism, and authoritarian patriarchal dystopias where women are chattel! https://t.co/Hd7242e2nR

The wines have since been removed for purchase from Lot18’s website, and it has been confirmed that the line has been pulled.

Susan Collins says she doesn’t think Kavanaugh was Ford’s assailant
The pandemic tattoo craze is here
Republicans are making it harder for people to vote in key 2018 elections
The stimulus’s $349 billion program to pay workers at struggling small businesses, explained
The protests are growing larger, calmer, and more community-oriented
Trump at UN offers his most forceful support for Hong Kong yet