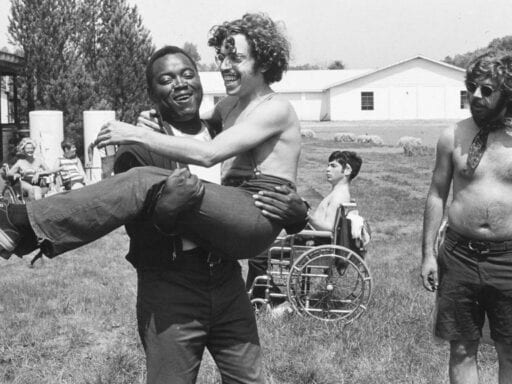 Share
Loading...
A still from Crip Camp by Nicole Newnham and Jim LeBrecht, an official selection of the US Documentary Competition at the 2020 Sundance Film Festival. | Steve Honigsbaum/Sundance Institute

The documentary, part of the Obamas’ Netflix slate, shows that seeing how the world could be can bring about real change.

Crip Camp was announced in April 2019 as part of Barack and Michelle Obama’s forthcoming slate of Netflix programming (via their production company Higher Ground). And once you see the documentary, the Obamas’ involvement makes perfect sense, given their interest in communities that organize to effect change. Crip Camp starts out as a movie about a place. But then it becomes a chronicle of a movement, a movement sparked by the young people whose lives were changed by their experience in that place.

The place is Camp Jened, a “summer camp for the handicapped run by hippies,” as Crip Camp co-director (and former Jened camper) James Lebrecht explains early in the film. Located in the Catskills a few hours north of New York City, Camp Jened was a place for teens with all kinds of disabilities (like from polio and cerebral palsy) to spend time together and experience what it might be like to live in a world that was welcoming to them. And that was transformative. In the 1960s and ’70s, Americans with disabilities could still be kept out of schools, asked to leave public places, denied jobs for which they were qualified, and met daily with myriad barriers to living a life like anyone else.

Certainly, disability rights haven’t been “solved.” Laws designed to make the country accessible to every citizen are still unevenly enforced, and people still harbor prejudice (both overt or unrealized) against those with disabilities, who can be seen, and treated, as somehow less than human.

But the teenagers who attended Camp Jened in the 1970s, including Lebrecht, found that they were respected and viewed as whole people there. A speech impediment due to palsy was no reason for the group not to listen to your opinions. Everyone counted.

Crip Camp focuses on a group of teens who went to the camp in the early 1970s (it closed due to financial difficulties in 1977) and later joined the radical disability rights movement, with many of them ending up in Berkeley as young adults, advocating for legislation that would require public places to be accessible to everyone, and that would prohibit discrimination against people with disabilities. The film shows how the vision the young people experienced at camp, for a world that was open to everyone, led them to become activists and community organizers. They established the Berkeley-based Center for Independent Living, in which people with disabilities worked to provide services like finding housing and vocational training for others.

The latter half of the film centers on disability activists’ record-breaking occupation of the Health, Education, and Welfare offices in San Francisco in 1977 — they were there for a mind-boggling 28 days — and how other community organizations, from unions, progressive churches, and advocacy groups to the Black Panthers, supported them during that time. And their efforts worked; over time, and largely due to the leadership of Jened alumna Judy Heumann, politicians began to see the need to pass and enforce legislation on behalf of those with disabilities.

Crip Camp is buoyant and inspiring, a tale of people working together through difficulty and opposition to change the world. (Its soundtrack, which plays like a who’s who of the 1970s protest music scene, goes a long way toward this goal, featuring songs by Richie Havens, the Grateful Dead, Bob Dylan, Neil Young, and more.) It’s often funny, filled with archival footage — some of which was shot at Camp Jened by the radical filmmaking group the People’s Video Theater — and interviews with people who attended both Camp Jened and the protests.

At times it feels like Crip Camp bites off slightly too much for a movie that’s less than two hours long. But I can’t really blame the directors for cramming in as much information as they can. Lebrecht and co-director Nicole Newnham have a lot of ground to cover, because the history of how people with disabilities have been treated in the US, and the movement that eventually led to the 1990 passage of the Americans With Disabilities Act, is still largely opaque to Americans who haven’t had personal experience with disability. Crip Camp details some of the shameful realities in a way that’s eye-opening and simple to understand, because it’s grounded in individual people’s experiences.

And what Crip Camp may do best is showcase how a bunch of teenagers who get a glimpse of how the world could be might just be able to make that world happen. Without the community at Camp Jened, the film suggests, the disability rights movement may never have had such crucial grounding in friendship and love. Movements depend on the solidarity that comes from strong community ties to succeed — and that’s still an important thing to remember today.

Crip Camp was an opening night selection at the Sundance Film Festival and will premiere on Netflix in 2020.