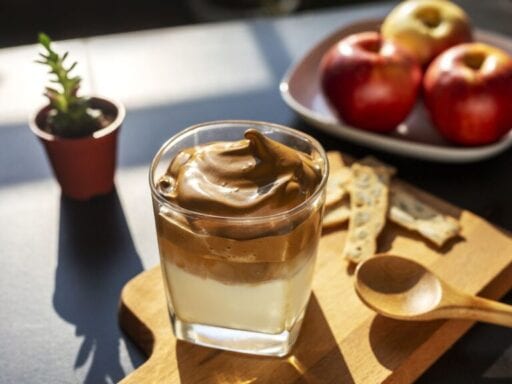 In my first full week of working from home, I was on a quest to figure out how to make coffee — that didn’t taste absolutely revolting — without a coffee maker. I came across a semi-viral coffee recipe (on TikTok, of course) that was so plainly simple and aesthetically pleasing, I began making it every morning as a little quarantine treat to start my day. During my first few attempts at what’s called “dalgona coffee,” I dutifully snapped photos of the drink’s milky gradient to post on my Instagram Stories, something many of my friends did with their own drinks, tagging it with the new “Stay Home” sticker.

Dalgona coffee, which originated in South Korea, requires only three ingredients — instant coffee, sugar, and hot water — that are vigorously mixed together until the froth becomes fluffy and aerated. The drink gained steam in the US by mid-March, when parts of the country began imposing shelter-in-place measures, which meant more people were staying home and relegating some extra time to baking bread, making pretty coffee, or participating in viral online challenges.

yes i hand whisked this whipped coffee for like 20 mins bc my mommy wanted to try it she loved it!! (달고나 커피) #korean #fyp #aesthetic

♬ Put your head on my shoulder cover by karlo – karlogutierrez

I consider dalgona coffee one of the early “quarantine trends” that have cropped up during this indefinite and uncertain period of time, when staying indoors and avoiding social interaction has become the new normal for many Americans. It’s easy and replicable (as most emerging internet trends are), which helped it proliferate on social media. But it appears that dalgona coffee is only the beginning: As more people find themselves at home, they’re collectively gravitating toward certain activities and consumable content in their isolated reality, in hopes of feeling a little less alone.

The coronavirus has radically altered practically everyone’s daily schedules and routines, but it’s an undeniable privilege to be safe at home thinking, “How should I pass my time?” Essential workers, parents of young children, caretakers, or those who were recently laid off don’t have the luxury of leisure, and some people’s lives have become busier and more hectic than ever. Still, there’s a cultural quarantine hivemind developing on platforms like TikTok, Instagram Stories, and Zoom, allowing micro-trends to bloom and fade even faster than before.

These trends, which include everything from virtual PowerPoint parties to fervent, meme-ified levels of bread baking, all share a few things in common. Like dalgona coffee, they’re easily achievable at home, extremely shareable online, and highly participatory (albeit virtually). In such times of uncertainty and crisis, these activities bring me and many others a feeling of comfort and joy — despite how truly boring the task of, say, making frothy coffee might be.

Take PowerPoint parties, for example. They’re part of an overall move toward virtual gatherings taking place on Zoom, a video-conferencing app that people of all ages have been using to host virtual parties, happy hours, family get-togethers, and even religious events like church services and Passover Seders. These virtual parties are a zany Gen-Z-inspired offshoot in which each attendee creates a short presentation on a topic agreed upon by the group, ranging from the ridiculous to the downright sensible. The goal can be to convince friends to believe in your proposed theory, inform them, focus conversation, or just have a good time at everyone’s creative expense.

Tonight me and my pals had a powerpoint presentation party in isolation where there were no content guidelines. Hilarity ensued pic.twitter.com/7rMP5wzyDg

“This format, instead of talking to each other for multiple hours, lets you inform or entertain your friends about whatever you’re interested in,” a 14-year-old who hosted a PowerPoint party told the Atlantic. “It lets you work on something other than school that you actually want to do on your computer.”

These gatherings are, in a sense, a temporary replacement for what we’ve lost socially — things we’ve taken for granted, like the natural flow of conversation, eye contact, and the subtlety of people’s facial expressions. “When we aren’t able to physically gather in all types of ways, not only celebratory ways, but in our schools, in our places of worship, in our neighborhood associations, it’s a collective stress to our well-being,” Priya Parker, author of The Art of Gathering: How We Meet and Why It Matters, previously told Vox.

In this way, even if a PowerPoint (or other software) party might seem silly, it acts as a reprieve from loneliness. It could be the closest thing possible to an intimate night in with friends, laughing at the most chaotic PowerPoint slides on the screen, hoping you aren’t lagging.

Then there’s the bread baking. Overnight, it felt like every person I knew with an oven began attempting to bake bread from scratch, which helps explain why grocery stores nationwide have temporarily run out of flour, yeast, and other baking supplies. Google searches for “bread” hit an all-time high during the week of March 25, Eater reported.

Of course, long before the coronavirus, people baked to procrastinate or to relieve stress and anxiety. In 2018, a psychology professor told the New York Times that “procrastibaking,” as he called it, could help us “feel skilled, nurturing and virtuous in the present while distracting us from the future.” Our newfound love for bread could be an extension of that, since “it’s reassuring to mix, knead, proof, shape, and bake,” wrote Eater’s Meghan McCarron.

Already, people are joking that bread baking is their new quarantine brand. They’re enthusiastically discussing their sourdough starters, making jokes about their romantic partners’ obsession with bread, snapping photos, and crowdsourcing tips. Experienced bakers are dishing out advice and easy-to-follow recipes for first-timers. There has emerged this online “cool” factor to bread baking that has the same vibe as cooking an Alison Roman recipe or opening a bottle of natural wine — a shorthand for how domestically inclined a person is, especially when it’s all over their social media.

tfw loving bread + bread-baking has been your entire personality since 2014 and now sourdough starters are “cool” pic.twitter.com/X5FgKYkoY3

There might be a performative element to posting a fresh batch of baked goods online, but I find these small life updates strangely endearing. My sense is that people are eager to celebrate small, quantifiable victories — whether that be a successful loaf or a nice whipped coffee — as life grinds to a standstill for those of us who are able to stay home. These little trends walk the line between feeling like “hey, I’m doing something” and avoiding the pitfall of the overwhelming pressure to stay productive, to carry on with life and professional routines as normal, despite living in such unprecedented times. Above all, they offer a social benefit, a sense that maybe you’re not alone in performing the task after all.

There’s a voyeuristic pleasure that comes from observing others online; it has become my morning, afternoon, and evening routine to scroll through Instagram Stories, pressing on the tiny colorful circle that surrounds a friend’s photo to play catch-up. I am simultaneously sharing pieces of my personal life — things I would be embarrassed to post were we not so socially distant — which has helped me actually engage with faraway friends. Over the course of the past two-ish weeks on Instagram, I’ve been tagged to do the 10-day push-up challenge and the “until tomorrow” challenge, where you post an embarrassing photo of yourself for 24 hours and message every person who likes your post to do the same. (I haven’t been asked to participate in the “draw something” challenge, however, which is the closest I’ve come to feeling FOMO, or the fear of missing out, in the past three weeks.)

Everyone: until tomorrow challenge
Me: pic.twitter.com/ZcImRcBZ9Y

At this moment, we’re coalescing around certain trends and platforms as people try “all sorts of extreme ways of connecting” to stave off loneliness, a marketing researcher told the New York Times. These often mundane acts serve as a momentary distraction from our apocalyptic reality (at least for those who can briefly tune it out), where state health care systems are stretched thin taking care of the sick and millions of people have filed for unemployment.

In the grand scheme of this pandemic, loneliness and boredom feel like they should be minor concerns, especially for those who have the means to stay connected with their loved ones. However, this state of perpetual boredom could be socially damaging in the long run, researchers told Wired. Boredom is correlated with higher levels of drug and alcohol abuse, depression, and anxiety; bored people could become desensitized to emotions. When coupled with economic stress and overall uncertainty, this can make it harder for people to focus and find meaning in life.

The true “social recession” from the coronavirus — the “collapse in social contact that is particularly hard on the populations most vulnerable to isolation and loneliness” — will likely be particularly hard for older adults and people with disabilities or preexisting health conditions, Vox’s Ezra Klein wrote. This includes people who don’t have online networks or have insufficient broadband access, meaning they’re less able to stay connected with those outside of their immediate household.

It’s true that online interactions, quarantine trends, and wild oversharing can only do so much to fill the social void left by the pandemic. For now, though, I’m determined to find joy in whatever silly, time-intensive activities are available to me on the internet, and I encourage you to do the same — even if that means making my 15th cup of dalgona coffee in a week.