Daniel Pantaleo, the NYPD officer involved in Eric Garner’s death, has been fired 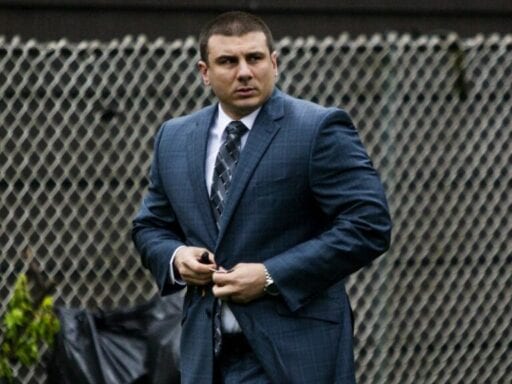 Share
Loading...
Officer Daniel Pantaleo prior to an NYPD administrative trial in May 2019. Pantaleo was terminated by NYPD Commissioner James O’Neill on August 19, 2019. | Eduardo Munoz Alvarez/AP

More than five years after the death of Eric Garner, the officer who used an NYPD-prohibited chokehold on the unarmed black man has been fired.

The New York Police Department commissioner’s announcement of Officer Daniel Pantaleo’s firing on Monday is, in some respects, a long-awaited conclusion to the high-profile case. Garner’s death first drew national attention in July 2014, when a video taken by bystander Ramsey Orta showed Pantaleo using a prohibited chokehold on Garner. Garner’s cries of “I can’t breathe” became a rallying cry for the Black Lives Matter movement, which seeks to highlight how black communities have been negatively affected by overaggressive policing.

While an autopsy found that the 43-year-old father of six died of cardiac arrest, a city medical examiner argued that the pressure placed on his neck — as well as the subsequent pressure on his chest after officers forced him to the ground — also played a role in his death.

The decision brings the first serious penalty Pantaleo has faced. In 2014, a Staten Island grand jury declined to indict Pantaleo on criminal charges for Garner’s death, a decision that was heavily criticized by activists and sparked protests that December. The NYPD initially argued that it could not pursue disciplinary action against the officer until a federal investigation into Garner’s death was completed. But in 2018, the NYPD’s Civilian Complaint Review Board announced that Pantaleo would finally receive an administrative trial this year, a process where a judge would hear evidence and recommend if Pantaleo, who had been on desk duty since Garner’s death, should lose his badge.

NYPD Commissioner James O’Neill’s decision is the final step of that administrative trial, which ended in June and revealed previously unreleased details about the immediate aftermath of Garner’s arrest. During the trial, the prosecution argued that Pantaleo used a chokehold on Garner, and intended to restrict the man’s breathing. The defense countered that Garner ultimately died due to poor health and that Pantaleo did not use a chokehold, but was instead attempting to restrain Garner with a different technique that police officers are taught during training.

During a Monday press conference, O’Neill said that “it is clear that Daniel Pantaleo can no longer serve a New York City police officer,” citing an administrative judge’s recent recommendation that Pantaleo be fired.

“No one believes that officer Pantaleo got out of bed on July 17, 2014, thinking he would make choices and take actions during an otherwise routine arrest that lead to another person’s death,” O’Neill said. “But officer’s choices and actions even made under extreme pressure matter.” He later added that there are “absolutely no victors here today.” Pantaleo will not receive a pension following his termination.

The decision serves as the culmination of a years-long case

Earlier in August, Rosemarie Maldonado, the NYPD’s deputy commissioner of trials, found that Pantaleo was guilty of misconduct and recommended that he be fired. On Sunday, the New York Times reported on the details of Maldonado’s official opinion, noting that the judge called Pantaleo’s claims that he did not use a chokehold “implausible and self-serving,” and that the officer had been “untruthful” when recalling the incident. Pantaleo was formally suspended by O’Neill after Maldonado submitted her recommendations.

Attention to the officer’s continued employment intensified when the departmental trial began earlier this year, and then again in July when the Department of Justice, after five years of investigating, announced that it would not prosecute Pantaleo for Garner’s death. That announcement has been heavily criticized by Garner’s family in the weeks since.

Criticism has also fallen on Democratic presidential candidate and New York City Mayor Bill de Blasio for the city’s years of delay in starting disciplinary proceedings against Pantaleo. The mayor countered that he did not have the power to fire Pantaleo, and that the city waited for the DOJ to finish its investigation, later moving ahead after that investigation took too long to end.

Vox Sentences: A Band-Aid for a 35-day wound
This week in TikTok: Some wholesome family quarantine content
The US reportedly ordered millions of N95 masks from unproven suppliers
How Joe Biden plans to use executive powers to fight climate change
Vox Sentences: What ISIS leaves behind
Here’s how tickets were allocated for the South Carolina Democratic debate