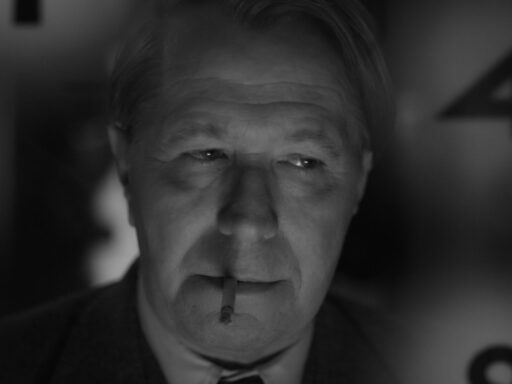 The finely-tuned Netflix drama about the co-writer of Citizen Kane is about the power of movies. But it’s not optimistic.

Mank isn’t a movie for everybody, though it masquerades as one. Since it’s a Netflix original, its viewership will likely dwarf the number of people who might have moseyed on down to an art-house theater in days of yore. And it’s directed by David Fincher, whose taut thrillers — including Se7en, Fight Club, Gone Girl, Zodiac, and The Social Network — have earned him a reputation as a darkly savage crowdpleaser.

I can’t imagine many Fincher-heads being thrilled by Mank, though. No serial killers, no fistfights, no bloody murders. Its target audience is almost impressively niche: Cinephiles, film critics, and people who are deeply interested in the history of Hollywood circa 1940. It’s not that a person outside that audience can’t watch and, in broad strokes, understand the story of Mank. It’s that to an extent, the film feels like inside baseball. (If you are interested in unpacking that inside baseball — which has to do with turn-of-the-century moguls, 1930s Hollywood politics, and film critics’ feuds from the 1960s, check out this explainer.)

Mank is the tale of Herman J. Mankiewicz, the man who co-wrote Citizen Kane, which is still widely (and, by my lights, correctly) considered one of the greatest movies of all time. He shares the writing credit with the film’s director, producer, and star, Orson Welles. Mank runs along two timelines. In the first, it’s 1940. Mankiewicz (Gary Oldman), a seasoned Hollywood screenwriter who’s been down on his luck and laid up by a car accident, is sent by a film producer to a remote house with a nurse and a secretary to write a screenplay for Orson Welles. He titles that screenplay America, but it eventually becomes Citizen Kane.

Mank’s second timeline begins about a decade prior, as Mankiewicz becomes acquainted with William Randolph Hearst (Charles Dance), one of the richest and most famous men in America, and Hearst’s mistress, the actress Marion Davies (Amanda Seyfried). Mankiewicz is a busy working writer and an infamous drunk. Every famous writer and plenty of famous producers from the era show up in this timeline — from David O. Selznick (Toby Leonard Moore) to Ben Hecht (Jeff Harns) to, most significantly, Louis B. Mayer (Arliss Howard) — and Mankiewicz slowly realizes, through a number of experiences, that the industry he works in is both influential in ways that have nothing to do with entertainment, and morally bankrupt. (This latter bit is intertwined with the 1934 California gubernatorial election, which means Upton Sinclair, played by Bill Nye, makes a cameo.)

Fincher, working from a screenplay written by his father Jack Fincher, makes obvious nods to films of the period and Citizen Kane specifically. Mank is in black and white. There are fake effects intended to mimic what you might see on actual film, even though Fincher shoots digitally. Certain editing choices and flourishes — like fade-outs at the end of a scene — pay homage to a bygone era of Hollywood filmmaking.

But if Mank is paying homage, it isn’t doing so slavishly; the film is no love letter to Hollywood. The film industry loves to make movies about itself, to be sure. But if, say, a work like the 2013 Best Picture winner Argo is about Hollywood saving the world, then Mank is the exact opposite. Mank tells the story of a screenwriter for whom working in Hollywood doesn’t amount to much more than taking home an easy, enormous paycheck for tossing off silly ideas. Like many others who headed West at the time — including, for instance, F. Scott Fitzgerald — Mankiewicz had been a successful journalist and playwright before he landed on the Paramount lot. For him, the movies were a diversion, fundamentally silly entertainment that offered a perfectly fine way to make a living, but wasn’t of much importance otherwise.

Over the course of Mank, however, he comes to realize there are big real-world implications to the way the movie business runs, from the lower-paid workers who struggle to make a living to the way the films they produce can distort the truth and benefit the powerful. Citizen Kane, at least in Mank’s telling, is equal parts his stroke of revenge and his plea for atonement.

It’s a very good movie, tight and layered and complex. And though it could feel chilly — and I understand that reaction — I found it quite moving.

We live, in a sense, in the world that Mankiewicz and Hearst and Mayer and the rest of them made: one where the moving image has profoundly affected the way we perceive reality and what we believe to be true. In Mank’s 1930s timeline, Mankiewicz is just catching on to the power that images, whether or not they’re “real,” exercise over the ordinary people who watch them. At one point, he says flippantly that he can’t imagine regular moviegoers would actually fall for the messages they see on screen. He soon learns he vastly overestimated the regular moviegoer.

That lesson resonates at the tail end of 2020, for social and political reasons I probably don’t need to explain. But it’s also why Mankiewicz’s dawning realization and slow decision to throw himself under the bus — by writing what turned out to be not just his best movie, but quite possibly Hollywood’s best movie — is so poignant. It’s an inkling of the promise of cinema, and also the limitations of cinema.

Meanwhile, it’s difficult to ignore the irony of a movie like Mank being produced by Netflix, a Hollywood upstart, to be viewed, mostly, on people’s TVs and laptop screens. The Hollywood that Herman J. Mankiewicz worked in was on the precipice of a shift, a loss of innocence, as the studio system began to stagnate and new ways of doing business appeared on the horizon. A similar shift looms now, due in no small part to a decline in the communal experience of going to the theater and studios’ foregrounding of individualistic movie-”going” via small screens. There’s a lesson in there, somewhere, though I’m not sure we’ll know what it is till we get a few years’ worth of distance.

But what’s obvious, from Mank, is that movies aren’t built to save anyone. They never have been. They can be transformative; they can do good in the world; they can change people’s outlooks in many ways. But not simply because they’re movies. Any impact a movie has is the result of an artist choosing to look past the end of their own nose and do something vulnerable, purposeful, and risky. Entering someone else’s experience through a movie is different from being presented with statistics, or polemics.

When people in power harness the moving image to benefit their own ends, they do just the opposite of saving the world. What Mank suggests is that daring to take movies (and, by extension, TV) seriously, and seeing them for the cultural bellwether they are, requires some courage and perhaps a bit of recklessness. There’s no guarantee that your efforts will be rewarded. Never mind. It is work worth doing.

Trump administration releases new campus sexual assault rules in the midst of the pandemic
Liberal challenger Jill Karofsky wins a seat on the Wisconsin Supreme Court
Trump’s latest tweets are from an alternate reality where the protests are out of control
The Ukraine scandal makes a stronger case for impeachment than the Mueller probe did
“I’m not going to criminalize desperation”: Julián Castro on how his immigration proposals have chan...
The rise in murders in the US, explained