David Koch has died at 79. Here’s how he changed American politics. 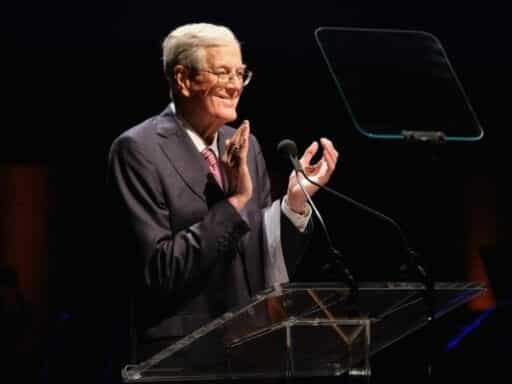 He and his brother Charles funded a decades-long effort to roll back environmental and business regulations.

David Koch — one half of the infamous “billionaire Koch brothers,” a political duo that spent hundreds of millions of dollars pushing American politics to the right in recent decades — has died at age 79, his company Koch Industries announced Friday.

By all accounts, David played second fiddle to his brother Charles in both the family company and the brothers’ political strategizing. But the two worked together closely in their decades-long effort aimed at rolling back environmental and business regulations, and at voting Democrats out of office.

The Kochs liked to couch their political aims in high-minded terms — that they supported “liberty” or “economic freedom.” And they spent a good deal of money funding and promoting such ideas in academia. But these aims often coincided with their business and financial interests, since Koch Industries is a major oil refining and chemical conglomerate. Policies aimed at reining in carbon emissions and combating climate change would generally be bad for the Kochs, so they fought any such proposal tooth and nail.

Dating back to the 1970s, Charles and David helped found and fund libertarian organizations, but in the ensuing decades they shifted their efforts toward more straightforward support of Republicans. It was during President Barack Obama’s administration that the Kochs dramatically escalated their political activity and became two of the most important political funders on the right.

In the 2018 midterm elections, for instance, the Kochs announced that their donor network — partly funded by them, but also by other wealthy conservatives — planned to spend up to $400 million on helping Republican candidates.

Due to large donations, David Koch’s name is all over major cultural institutions in New York City: the Metropolitan Museum of Art, Lincoln Center, the American Museum of Natural History. But it’s his and his brother’s political spending that will be his most memorable legacy.

Who are the Koch brothers?

Technically, there are four Koch brothers — Frederick, Charles, and twins David and Bill. But when people talk about the political influence of the “Kochs” or the “Koch brothers,” they’re mainly referring to Charles and David, who worked most closely together.

The Koch brothers were born in Wichita, Kansas. Their father, Fred C. Koch, had founded an oil refinery company, and when his health began to fail in the 1960s, he gave Charles an increasingly larger role in running things. After Fred’s 1967 death, it was then mainly Charles who transformed his father’s company into the behemoth Koch Industries that made him and David not just extremely rich, but two of the richest people in the world. (They tied for 11th richest in the latest Forbes estimates.)

Along the way, Charles and David were pitted against their other brothers, Frederick and Bill, in a bitter power struggle for control of Koch Industries, which split the pairs of brothers apart and resulted in years of litigation. But Charles and David won, and in the decades since, they’ve worked together to found and fund a massive operation to influence American politics.

The 1980 presidential election is remembered today as the year of the Reagan Revolution, as GOP nominee Ronald Reagan won a nationwide landslide victory against incumbent Democrat Jimmy Carter.

But one odd footnote from that year is that David Koch was on the ballot as well — as the nominee for vice president of the United States for the Libertarian Party.

In the years before this, Charles and David had become increasingly interested in libertarian ideas on economics, and had started to devote money to those causes (including what remains the main libertarian think tank, the Cato Institute). And David’s participation with the Libertarian ticket — clearly more of a lark than a serious effort to win — placed him and his brother apart from both major political parties. (They got 1 percent of the vote.)

So over the ensuing decades, the Kochs shifted their strategy. They founded and funded academic institutions (George Mason University’s Mercatus Center) and academic programs to spread ideas, as well as nonprofit groups (Citizens for a Sound Economy) to try to build “grassroots” support for those ideas and pressure Congress and state legislatures. Many of those ideas were about opposition to government and environmental regulations — during a period when Koch Industries was facing serious regulatory and legal problems related to its environmental and safety practices. And, seeing third-party politics as pointless, they became major Republican donors.

But it was the Obama administration that spurred the Kochs to dramatically escalate their strategic and financial involvement in politics. The new Democratic president was trying to pass both a major expansion of government health care spending and a cap-and-trade bill designed to rein in carbon emissions and combat climate change. Charles Koch called Obama’s agenda “the greatest assault on American freedom and prosperity in our lifetimes,” saying Democrats’ policies “threaten to erode our economic freedom.”

Amidst a recession, there was already a backlash against Obama in the form of the Tea Party — a backlash the Kochs helped stoke and tried to shape around their preferred issue positions (anti-Obamacare, anti-cap-and-trade, anti-regulation, anti-taxing the rich). “The Kochs didn’t like the social issues, so they tried to make it a small-government thing and put ‘values’ on the back burner,” social conservative activist Tony Perkins says in Tim Alberta’s new book American Carnage.

Democrats’ cap-and-trade bill passed the House, but widespread backlash, including from Koch-funded groups, helped ensure it was never brought for a vote in the Senate. This turned out to be the final major legislative effort to address climate change in the next decade. Obamacare, though, did end up passing — but the Kochs helped ensure many Democrats who voted for it would pay a price, through a broad effort to help Republicans win in the 2010 midterms.

They did this through a complex web of dark money groups that became informally known as the “Kochtopus,” which spent on organizing and ads. Much of the money for these groups came from the Kochs themselves, but they also got many other wealthy Republicans to pitch in as part of their “donor network.” And the effort was remarkably successful — the GOP won enormous gains in the House and in state legislatures in 2010, which would help shape the next decade of American politics.

However, the Kochs were never truly kingmakers in presidential politics. David, for instance, said in 2015 that he wanted Wisconsin Gov. Scott Walker to win the Republican Party’s presidential nomination. That did not pan out, and the Kochs entered an awkward period, with Charles criticizing Donald Trump’s lack of commitment to limited government and free market economics — though David did reportedly attend Trump’s election night party.

Since Trump won, Charles has continued to feud with the president, criticizing Trump’s “protectionism” and saying he won’t spend to help Trump win in 2020 (though he will keep spending to help Republicans win). David, meanwhile, had a difficult last few years, experiencing health problems and reportedly being pushed aside from Koch Industries by Charles in 2018 (the company said he retired).

Meanwhile, though, Trump has relied on many appointees with close ties to the Kochs — and the brothers have clearly benefited from the Trump administration’s tax cuts, deregulation, and environmental policies. So though it may seem that Trump’s rise disproved nostrums about the Kochs’ influence on politics, in practice, many of his administration’s policies are exactly what they — and their bottom lines — wanted all along.

Promising Young Woman finds the thrill in obliterating nice guys
Odd Job: a Q&A series about the weirdest ways people make money
Some Mueller team members aren’t happy with Barr’s description of their findings
Social media’s conspiracy theory problem isn’t going away
Why people are mad about a list of Trump donors online
The Judiciary Committee scheduled a vote on Kavanaugh for Friday. Ford hasn’t even testified yet.