Deal? No deal? Delay? Here’s the week ahead in Brexit votes. 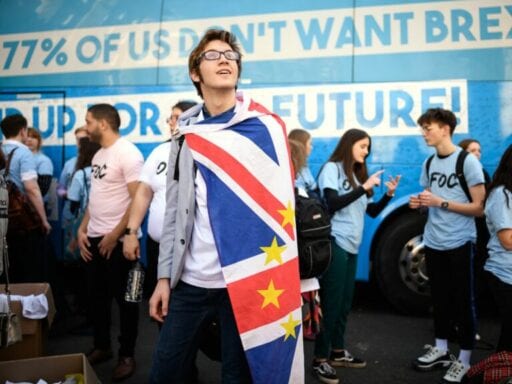 UK Prime Minister Theresa May will put the Brexit deal to a second vote. If it gets defeated, Parliament will vote on whether to leave the EU without a deal, or seek an extension.

British Prime Minister Theresa May will try again next week to get a Brexit deal through Parliament, with less than 20 days to go before the March 29 deadline.

May promised late last month that she would give the UK Parliament a chance to vote again on a Brexit deal on Tuesday after going back to the European Union to try to negotiate changes that could win the backing of members of Parliament (MPs).

The focus of those negotiations has been the “Irish backstop,” an aspect of the deal that guarantees no hard border between Northern Ireland and the Republic of Ireland after the UK splits from the EU. But those discussions haven’t gone all that well in the past few weeks.

A potential breakthrough can’t be ruled out ahead of the vote on Tuesday. But will it be enough to get a Brexit deal through Parliament?

Parliament defeated the May’s Brexit deal in January by a stunning 230 votes. The prime minister may need to offer something different to have a chance of succeeding this time around. May, on Friday, asked the EU for “just one more push” to get a revised deal done so she can sell the agreement to MPs.

The EU has always insisted it won’t reopen the deal, though it may be willing to attach some (legally binding) assurances about the backstop. Whether that will be enough is the ultimate question in the UK. Or, as a BBC headline put it, “Brexit: Does anyone really know what happens next?”

No, is the answer. But here’s what you need to know ahead of next week’s vote.

Any chance of a backstop breakthrough?

The Brexit deal combines a 585-page agreement with a short political declaration on the future EU-UK relationship. But what’s holding everything up is the issue of the Irish backstop.

The backstop is basically an insurance policy that says if the EU and UK can’t define their future partnership after Brexit, there will be no physical checkpoints or controls on the border between Northern Ireland (part of the UK and soon to be an ex-EU member) and the Republic of Ireland, an independent country that’s also an EU member-state.

To achieve that, the entire UK will stay in a customs arrangement with the EU, and Northern Ireland will more closely follow the EU’s regulations. The backstop ends when both sides agree to a permanent arrangement that keeps the border open, and the UK can’t pull out of it unilaterally. (Here’s an explainer on why that’s important.)

Brexiteers — those who want to a hard break with the EU — loathe this plan because it keeps the UK and EU closely aligned, which they see as entrapping the UK in an indefinite relationship with the bloc.

The UK has sought “alternative arrangements,” to the backstop, but have failed to find any that would satisfy the EU or truly prevent a hard border. And the EU has stayed firm on their stance that they won’t reopen the text of the withdrawal agreement.

The first is a legally binding guarantee that the backstop is intended to be a temporary arrangement and an option of last resort, used if, and only if, the EU and UK can’t figure out alternatives during a transition period after Brexit. (These commitments are based on a letter that EU leaders wrote to May in January.)

The second (and definitely more controversial) suggestion involved a tweak to the backstop that would allow Britain to unilaterally leave the customs union, as long as Northern Ireland remained in alignment with the EU.

This was the EU’s original backstop plan, a set-up the UK has rejected in the past because it would mean border checks on the Irish Sea, with goods coming from the rest of Great Britain getting checked before landing in Northern Ireland, and vice versa. This arrangement is also unpalatable to the Democratic Unionist Party, the conservative Northern Ireland Party whose votes keep May’s government in power.

The DUP doesn’t want Northern Ireland to be treated any differently than the rest of the UK, which this plan would most definitely do.

Nothing new in what Barnier is offering.

This is a retreat back to the proposal of an Northern Ireland only backstop previously rejected by all sides in the House of Commons.

So May’s government has turned down this Northern Ireland-only backstop before, and it looks ready to quickly reject it again.

The legal commitment may bring over some converts because “that provides more assurances on the good-faith enterprises of the European Union than it does in the withdrawal agreement,” Anand Menon, the director of UK in a Changing Europe, told me.

Parliament will vote on May’s deal on Tuesday. Then, who knows.

May’s Brexit deal may look very similar to the one Parliament rejected in January when the UK votes on Tuesday, barring any last-minute developments. Which means May may face another embarrassing defeat in Parliament once again.

But it is March, with less than three weeks to go until the Brexit deadline. The calendar alone may convince members of Parliament to vote for a deal, especially if they fear the possibility of a no-deal Brexit and its catastrophic consequences. May has also been trying to woo members of the Labour opposition party who are pro-Leave with funding for their constituencies. And she’s tried to make the “Hotel California” pitch to MPs — especially hardline Brexiteers — that if they don’t vote for her deal now and break up with the EU on March 29, the UK might never leave.

That might be a bit dramatic. But there is a much greater chance that Brexit could be delayed.

May has promised members of Parliament two additional votes if her deal fails on Tuesday. She’s said they would happen in succession, on Wednesday and Thursday.

If the no-deal measure went down, then, on Thursday, Parliament would vote on whether to seek a limited extension to Article 50, the provision of the EU treaty under which the UK is withdrawing from the bloc. May has indicated this would be a short-term extension, which would simply postpone Brexit for a few months. This wouldn’t eliminate a no-deal scenario. That scenario just wouldn’t happen on March 29.

And any extension, of any length, will require approval from the EU member-states.

“If the UK asks for an extension, it will be a short extension, everything suggests that,” Michael Leigh, a fellow at the German Marshall Fund and former EU commissioner, told me.

That’s likely to mean two months, possibly three. European parliamentary elections are taking place in May, and the newly elected members begin their term July, so the idea would be for the UK to exit the EU before then.

But, as Leigh told me: “The EU response has got to be — what is the purpose of the extension?”

EU leaders had previously been reluctant to grant the UK an extension unless a legitimate reason existed — something that could fundamentally change the Brexit outcome, such as another referendum vote on whether to leave the EU or new general elections.

Moving the deadline so the UK could continue arguing didn’t seem likely before, but the EU also wants to avoid the chaos of a no-deal scenario, which would still be bad for the EU (if much worse for the UK.) The EU likely doesn’t want to take the blame for that fallout, especially if it’s within its power to avoid by just pushing back the deadline. Still, all 27 EU member states would have to unanimously approve the extension, and they could impose conditions.

The EU would likely make this decision at the European Council summit starting March 21, on the brink of the Brexit deadline.

If the EU rejects a Brexit extension, anything could happen next. A no-deal Brexit. Or even a third vote on the Brexit deal.

A lot would depend on how badly May’s deal is defeated — if it is defeated — on Tuesday. This isn’t likely to be a 230-vote beating like last time. If it’s a close vote — say, 10 votes or so — it’s possible May will make a third attempt.

A federal appeals court just blocked Trump’s policy of sending migrants back to Mexico
J.K. Rowling’s transphobia is a product of British culture
Huge wildfires are spreading in California, Oregon, and Colorado. They’re poised to get worse.
Why you always seem to have room for dessert
Why the Covid-19 economy is devastating to millennials, in 14 charts
The 25th Amendment: The quickest way Trump could be stripped of power, explained