Dear Michael Bloomberg: Thank you for not running for president 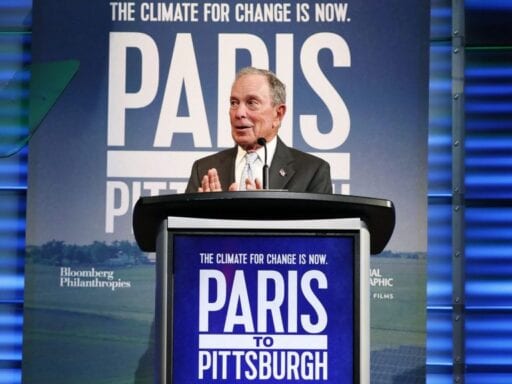 Michael Bloomberg is going to work on climate change. Good.

Michael Bloomberg is concerned about America’s future. But he’s not, he announced Tuesday, going to try to fix it by running for president.

Instead, he’s launching Beyond Carbon, a campaign to move the country away from oil and gas and toward developing clean technologies.

Bloomberg is a billionaire who made his fortune as the founder of Bloomberg L.P., a financial services and media company. According to Forbes’s newest ranking of the world’s billionaires, his net worth is about $55 billion, making him the ninth-richest person in the world. He won three elections for mayor of New York City, self-funding his successful campaigns, and his name was frequently mentioned as a potential presidential candidate, both in 2016 and in 2020.

Bloomberg is politically active, passionate about defeating Donald Trump (in Tuesday’s announcement, he called the president a “threat to our country”), and clearly — at least sometimes — tempted by the prospect of the presidency. But in deciding not to pursue it, he made a good call.

A run for president can be particularly appealing to the independently wealthy looking to push for a change. They can skip the dreary rigors of fundraising, and they can argue they’re less beholden to special interests. But self-funded candidates don’t do as well as you’d expect when seeking political office. Some research has found “a candidate’s chance of winning a primary or general election tends to decrease as the amount of personal funds invested in their campaigns increases.” Past a certain point, money does a candidate no good at all. In an environment where both candidates are spending lots of money on ads, they may not change any minds.

And more important, if you’re a billionaire, you have lots and lots of avenues to use your money to advance your political goals. Most of them are vastly more effective than a run for office, which is typically going to be a long shot. Anyone running on their “business sense” should ask themselves the most cost-effective way to achieve the results they dream of — and typically, the answer won’t be with a campaign for president.

What to do instead of running for president

So what are you supposed to do if you’re a billionaire who wants to fix America?

There’s an argument for billionaires in politics, at least as long as they made their fortunes themselves: It takes an incredible work ethic, good management skills, dedication, and a gift for setting priorities to turn a small company into a prosperous multinational one. Those all seem like skills that’d be useful in politics too, right?

But running for president is actually a bad idea. You’re very unlikely to win, it’s not clear that you have the skills to do the job well, and there are much, much better ways to make a difference in the world with your billions.

When former Starbucks CEO Howard Schultz announced he was considering a run for the White House, I laid out a roadmap for what I think billionaires should do instead to advance their beliefs and policy prescriptions: stop flirting with a run as an independent, which is doomed; support candidates who have policy positions they like; support electoral reform to make independent candidates less doomed in the future; and directly give your money to your highest policy priorities.

That’s pretty much precisely the roadmap that Bloomberg is following. He rejected an independent candidacy in January, pointing out that “there is no way an independent can win” but leaving the door open for running in the Democratic primary. He has donated more than $100 million to the state and local candidates he thinks are most promising — enough money to both win elections and build a bench of talented young politicians for future campaigns.

In 2011, following the failure of cap and trade legislation in Congress, I teamed up with the Sierra Club on a campaign called Beyond Coal. By organizing and mobilizing communities affected by the harmful pollution of coal-fired power plants, we have helped close more than half the nation’s plants — 285 out of 530 — and replaced them with cleaner and cheaper energy. That was the single biggest reason the U.S. has been able to reduce its carbon footprint by 11 percent — and cut deaths from coal power plants from 13,000 to 3,000.

Now, I will take the next big steps. First, I will expand my support for the Beyond Coal campaign so that we can retire every single coal-fired power plant over the next 11 years. That’s not a pipe dream. We can do it. And second, I will launch a new, even more ambitious phase of the campaign — Beyond Carbon: a grassroots effort to begin moving America as quickly as possible away from oil and gas and toward a 100 percent clean energy economy.

The aim of Beyond Carbon is to develop the technology and infrastructure to power America with much less carbon dioxide emissions.

That’s not the only issue where Bloomberg is hoping to exercise leadership without seeking office. He argues that he can use his position — and his billions — to improve outcomes in gun violence, education, racial inequity, and opioid addiction too. He’s probably right (with the possible exception of education, where philanthropy has had disappointing returns). His work on each of these issues will almost certainly lead to better results that his candidacy would have.

“Until 2021, and possibly longer,” Bloomberg writes, “our only real hope for progress lies outside of Washington. And unlike most who are running or thinking of it, I’m fortunate enough to be in a position to devote the resources needed to bring people together and make a big difference.”

A lot of people have mixed feelings about billionaire philanthropy, at least once billionaires step away from uncontroversially great projects like vaccinating children and combating malaria, areas where individual billionaire philanthropists have saved millions of lives. Rob Reich, a philosopher at Stanford University, has argued that we should be more skeptical of how much leverage billionaires have to advance their civic ideals with their fortunes.

Those are legitimate concerns. My view is that we should judge billionaire philanthropy on the merits — laud them when they do good, encourage better when they waste their money, and criticize those projects that advance goals we don’t share. Going that route may be a little less dramatic than running for president. But CEOs should care about results, right?

It seems strange to congratulate someone for doing something that the rest of us are doing too — not running for president. But Bloomberg’s commitment to decarbonization — and his clearheadedness about how he can best use his resources to achieve his policy goals, instead of burning them on a doomed but satisfying campaign — is genuinely to be commended.

The QAnon supporters winning congressional primaries, explained
Some governors are easing coronavirus restrictions. Experts say it’s too soon.
Why almost no one is guilty of treason, explained
Sanders condemns Russian interference into his campaign
The commercialization of the commercialization of Christmas
“We r all on the same team”: read Sean Hannity’s chats with Paul Manafort