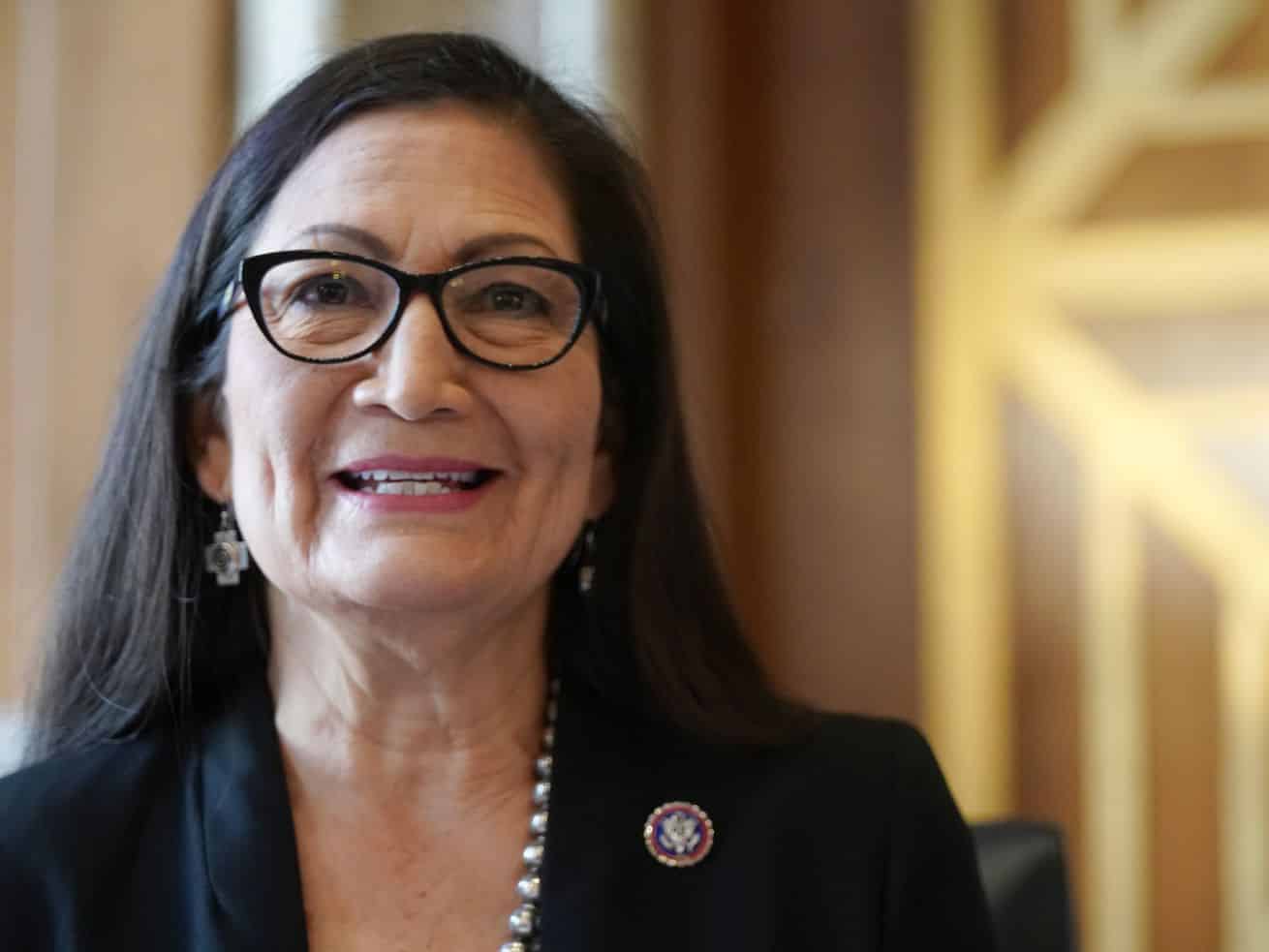 The US Congress member, who will be in charge of public and tribal lands, has spent much of her career fighting climate change.

The Senate has confirmed Deb Haaland — a member of the Laguna Pueblo tribe in New Mexico — as President Biden’s pick to lead the Department of the Interior. Haaland’s confirmation marks the first Native American to be appointed as Cabinet secretary in history, overseeing the department that manages public and tribal lands.

The Senate’s vote to confirm on Monday fell mostly along party lines, 51-40, with nine members missing the vote. During her hearing, Haaland received aggressive Republican pushback from senators whose home states — and political careers — rely heavily on the fossil fuel industry, calling her views to protect the environment and Indigenous communities “radical.” The line of questioning Haaland had to endure during her two-day confirmation hearing from Republican senators reflected a longstanding battle between fossil fuel backers and environmentalists.

Sen. Bill Cassidy, a Louisiana Republican who has accepted nearly $1.7 million from Big Oil, asked Haaland, “Will your administration be guided by a prejudice against fossil fuel, or will it be guided by science?” Meanwhile, Republican Sen. Mike Lee of Utah attacked the Obama-era protection to turn Bears Ears — an area of significance for Native Americans — into a national monument. As the head of the Interior, Haaland will lead the review of Biden’s executive order to submit findings and recommendations to restore the boundaries of Utah’s Bears Ears and Grand Staircase-Escalante national monuments, which the Trump administration diminished by 2 million acres. “The monument designation doesn’t make them more beautiful,” said Lee.

Through the hearing, Haaland said she will work hard to bridge party lines and take Congress members’ concerns into consideration — but also said she would not push aside environmental concerns nor Biden’s climate agenda.

“As I’ve learned in this role, there’s no question that fossil energy does and will continue to play a major role in America for years to come. I know how important oil and gas revenues are to fund critical services,” Haaland said in her opening remarks. “But we must also recognize that the energy industry is innovating, and our climate challenge must be addressed.”

Indigenous communities and environmental activists, who have long supported Biden’s pick, praised Haaland’s confirmation. “She is the most qualified person to lead the Interior into an era of repair and regeneration,” said Nick Tilsen, a citizen of the Oglala Lakota Nation in South Dakota and CEO of NDN Collective, an organization dedicated to building Indigenous power. “Indian Country has rallied behind her and is ready to roll up our sleeves with her and this administration to see what world we can make for our children and grandchildren.”

Her new role as the first Native American to serve as Interior secretary will be a great stride forward for the environment and Indigenous communities, as well as a huge undertaking, given what the previous administration has done to decimate the department.

The significance of having an Indigenous environmentalist as Interior chief

In 2018, Haaland made history as one of the first two Native American women elected to Congress, along with Rep. Sharice Davids, a member of the Ho-Chunk Nation in Kansas. As a member of Congress, she was the vice chair of the House Committee on Natural Resources and the chair of the subcommittee on national parks, forests, and public lands, and sits on the subcommittee for Indigenous Peoples of the United States. As a member of such committees, she had to listen to testimonies from community members, activists, and lobbyists expressing concerns regarding the Trump administration’s push to destroy sacred sites, pollute the environment, and drill on public lands.

“It’s disheartening,” Haaland told Vox last November. “The Trump administration has essentially destroyed and gutted the department and policies. President Biden’s commitment to fighting climate change and protecting our environment is the most progressive we’ve ever seen, and it will fix that.”

Haaland’s appointment to lead the department aligns with the Biden-Harris campaign plan for tribal nations, a comprehensive outline released last October that lists the administration’s priorities in addressing key issues that afflict tribal communities, such as health care and education. Aside from overseeing all public lands, the Interior Department is also responsible for honoring the federal government’s commitments to tribal nations — a task the department has historically, repeatedly failed to do.

And since no Native American has served in any Cabinet secretary position ever in US history, Haaland would be approaching her new role with deep knowledge and connection to issues concerning Indigenous affairs and environmental protection. She understands how the climate crisis disproportionately impacts marginalized communities — such as when oil pipelines cut through Indigenous sacred land posing risks of soil and water contamination, or when industrial facilities set up shop in historically Black neighborhoods.

“The Department of Interior has historically been a place where the fossil fuel industry and transnational corporations have used public lands as their playground to destroy the environment, to contribute to climate change, and line the pockets of the very few people at the cost of the environment and everybody,” said Tilsen. “She is not qualified to repeat that cycle, because she stands with the people and the environment.”

Thousands of Swiss women walked out of their jobs to protest inequality
Why some conservatives think Sanders is Trump’s biggest threat
The UK is the first country to grant emergency approval to Pfizer’s Covid-19 vaccine
Shopify hits President Trump where it hurts: In his wallet
Twitter is considering warning users when politicians post misleading tweets
Vox Sentences: Barr-schach test