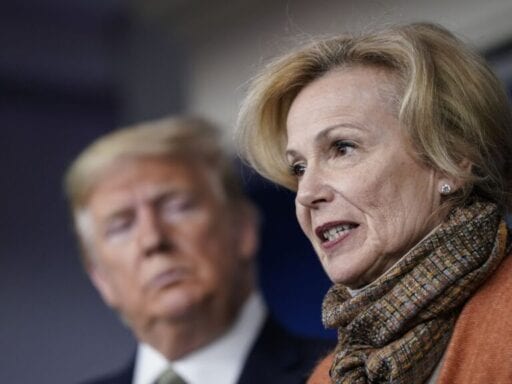 Dr. Deborah Birx, a respected physician and experienced diplomat who seemingly serves as a voice of reason in her role as coordinator of the White House’s coronavirus task force, raised a lot of eyebrows on Thursday with her effusive praise of President Donald Trump as “attentive to the scientific literature and the details” during an interview with the Christian Broadcasting Network.

“He’s been so attentive to the scientific literature and the details and the data,” Birx said. “I think his ability to analyze and integrate data that comes out of his long history in business has really been a real benefit during these discussions about medical issues.”

Despite what Birx would have you believe, Trump has been pushing misleading and contradictory medical advice. On February 26, for instance, he claimed coronavirus cases would “be down to close to zero.” His claim was hard to swallow then, and barely a month later the US has more than 85,000 cases.

It’s true Trump is sensitive to certain kinds of data — but those kinds generally include his own poll numbers and the stock market, not indicators of public health. Relatedly, Trump is currently pushing to reopen businesses currently shuttered by Easter — a timetable much faster than what public health experts recommend. So not only is Trump not “attentive to the scientific literature,” but, as I’ve detailed, a number of comments he’s made this week have illustrated that he doesn’t get the basics about how public health crises work.

But instead of acknowledging that reality — or at the very least dodging questions about it — Birx decided to go all in on praise.

“[Trump is] so attentive to the scientific literature & the details & the data. I think his ability to analyze & integrate data that comes out of his long history in business has really been a real benefit” — this is shocking, hackish stuff from Dr. Birx. pic.twitter.com/c2phsRYaJs

Birx is a legend in the fight against HIV and has worked for both Republican and Democratic presidents. When it was announced in late February that she’d be coordinating the White House’s coronavirus task force, she was widely seen as bringing a modicum of public health expertise to an administration desperately in need of it.

For once I have to commend this Administration on an appointment. Ambassador Debbie Birx is a serious public servant and scientist who will follow the data and lead a comprehensive response without bias. She inspires confidence. https://t.co/mEydqHqDKt

But it has become clear that Birx wants to stay in Trump’s good graces. She praised Trump early on for implementing travel restrictions on China that did nothing to stop the spread of the coronavirus that was already happening within America’s borders in a largely undetected manner because of lack of testing.

During a March 13 news conference, she described the president’s lagging coronavirus response in nearly heroic terms, then lent her credibility to promote a coronavirus testing website that turned out to not really exist.

If anyone knows the story behind the flowchart used by the White House to explain a website that apparently doesn’t really exist, my DMs are open. Please this is literally all I want to know. https://t.co/7xByA9uKKa pic.twitter.com/JRDr71eTzS

Another member of the White House coronavirus task force, Dr. Anthony Fauci, has been similarly careful to not cross Trump, but Fauci has at least admitted that the country’s failure to conduct a sufficient number of coronavirus tests represents a failure.

Fauci also hasn’t tried especially hard to hide the fact he puts up with Trump’s boorishness because he thinks it’s important for his voice to continue to be heard on the task force. To the extent that Birx is being motivated by similar considerations, her decision to do what it takes to stay in the president’s good graces is understandable. But unfortunate, some of her public remarks have started to lean into misinformation in a way Fauci’s have not.

Last week, for instance, Birx tried to explain away the US government’s ill-fated decision to try and develop its own coronavirus test by falsely suggesting that a test developed by the World Health Organization has major accuracy problems. (It doesn’t.) This week, she bragged about the US passing South Korea in total number of coronavirus tests conducted, ignoring that South Korea has a much smaller population and had much more testing capacity during the critical weeks when the virus was first spreading.

Dr. Birx is still dissembling on why US coronavirus testing remains a disaster pic.twitter.com/YD6tmZvCMu

On Monday, Birx made a painstaking attempt to pretend there might be data-driven reasons underlying Trump’s desire to relax social distancing guidelines as soon as possible, even though his motivations are transparently political. Then on Thursday, she tried to downplay reports that hospitals are preparing to make tough choices between treating patients and letting them die because of ventilator shortages — despite reporting about health care providers doing just that.

“Please, for the reassurance of people around the word, to wake up this morning and hear about [hospitals] creating Do Not Resuscitate situations for patients — there is no situation in the US that warrants that kind of discussion” — Dr Birx on Thursday pic.twitter.com/IwSlT5nSTU

Birx on Thursday made a case that models projecting as many as 60 million Americans being infected with the coronavirus are alarmist — “when people start talking about 20 percent of a population getting infected, it’s very scary, but we don’t have data that matches that based on our experience,” she said — but as explained by infectious disease epidemiologist Marc Lipsitch, her argument completely ignores ongoing problems with testing in this country that continue to make it hard to get the pandemic under control.

Solving the testing problems will not be easy, despite heroic local and state efforts to make up for the feckless federal efforts on this front. Supply chains are delicate and it may not be possible to come from behind and establish Korea-level testing capacity.

Trump is notoriously sensitive to criticism and has a long history of demanding complete loyalty from aides. It’s possible Birx is just doing what she thinks needs to be done to remain a positive influence.

But Birx’s inflated compliments for Trump during the CBN interview, combined with her repeated misleading comments about the government’s capacity when it comes to testing and supplies, brings to mind a comment that Fauci made to Politico just days after Birx’s appointment.

“You should never destroy your own credibility. And you don’t want to go to war with a president,” Fauci said. “But you got to walk the fine balance of making sure you continue to tell the truth.”

Gyms aren’t making it easy for people to cancel memberships
Stephen King has spent half a century scaring us, but his legacy is so much more than horror
Basic income can’t do enough to help workers displaced by technology
South Carolina wants to ban lifesaving medical treatments for trans kids
The nihilism of Mitch McConnell
12 great movies to look forward to this fall (and winter)