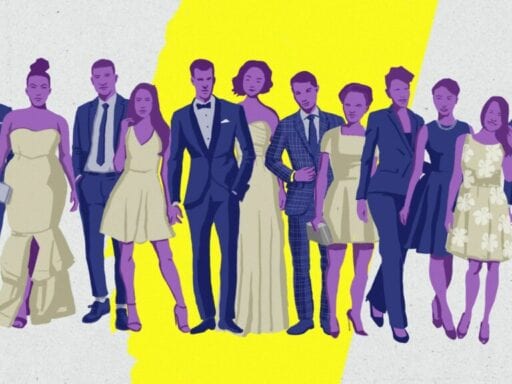 They’re stressful, classist, and sometimes no help at all. So why do they persist?

When Hannah Calkins, a 32-year-old librarian from Philadelphia, received an invitation to a “wine country casual” wedding, she laughed. Then she texted all her friends to see if they knew what it meant.

Not one did. “We Googled a bunch of pictures and cobbled together an idea,” she recalled. (Most guides define it as “relaxed elegance.”) “Then we decided we couldn’t afford to dress like that and just wore regular dresses.”

It was a “Connecticut casual” engagement party invite that stumped Ruth Tam, a 28-year-old journalist in Washington, DC.

“I went to image search results and gathered that I should dress as though I had gone to an Ivy League school or was cosplaying as the Kennedy family,” she said. “And ideally, it would help if I was white. If I was a guy, I should wear boat shoes. I should have put a sweater over my shoulders and worn a floral A-line skirt, but I had already packed.”

She ended up wearing a tank top and a pencil skirt, and when she got to the party, she found the groom-to-be in a henley and the bride-to-be in a sundress.

Tam managed to fit in, but the rest of us may not be so lucky. Wedding season is upon us, and that can only mean one thing: a deluge of ornate envelopes inviting us to celebrate the marriages of our nearest and dearest. Many of which will contain straight nonsense regarding the dress code.

Reader, a sampling of the dress codes to which wedding guests have been asked to conform: “dressy casual” (so common, yet so opaque). Black-tie casual (a paradox, surely?). Elegant casual (what). Colorado formal (I’m lost again). Chic cocktail casual (those are three separate things!).

In class-mobile America, dress codes can be a powerful act of democracy: With clear guidelines, anyone can appear to belong to the in-group. Anyone can look up what “black tie” means and understand exactly what’s expected of them wardrobe-wise.

But dress codes can also be a powerful act of exclusion. “Dressy casual” can mean something very specific to a particular group of people and another thing entirely to everyone outside of it. That’s why it can be incredibly stressful to get an invitation to a party with a dress code you don’t understand, or don’t think you can follow.

What do you do if you’re invited to a black-tie wedding and you don’t have the money to buy or rent a gown or a tux? What if you’re gender-nonconforming and you want to wear a suit, but the dress code tacitly assumes you’ll be in a frock? What does “black tie” mean if you’re used to Korean American or traditional Chinese weddings, or Indian ones?

And what if the dress code is just straight made-up?

Dress codes tend to perpetuate rigid ideas about masculinity and femininity. They favor the wealthy and the gender-conforming. Even when they’re clearer than the ones Calkins and Tam received, their clarity can make them all the more restrictive and forbidding.

But every year, the invitations come, triggering panic as we try to figure out exactly what to wear.

The rise of the dress code

Humans have tried to regulate clothes for basically as long as we’ve worn them on our bodies. We’ve also ignored these rules for almost as long. Sumptuary laws date back to seventh-century Greece, where women were forbidden to wear “jewels of gold about her, or go in an embroidered robe,” unless they were prostitutes. In 15th-century England, a knight was not to wear a jacket “unless it be of such Length that the same may cover his privy Members and Buttocks.” (Specific!)

In America, the General Court of Massachusetts in 1651 forbade men from “wearing Gold or Silver lace, or Buttons, or Points at their knees, or to walk in great Boots,” while women were banned from wearing silk hoods or scarves. The idea was to uphold the social order, to prevent someone from passing themselves off as a member of a different class, to keep women covered and the poor chastened.

As scholars have noted, that sumptuary laws were repeated so often, and contained such disconcertingly specific guidelines, suggests not that many people followed them, which is perhaps why they fell out of use in the 17th century. But we continued to earnestly regulate each other’s sartorial choices even as we moved the codes by which we do so out of the legal realm and into the social.

“Clothes are to us what fur and feathers are to beasts and birds; they not only add to our appearance, but they are our appearance,” Emily Post wrote in 1922 in the first edition of her book Etiquette. “How we look to others entirely depends upon what we wear and how we wear it; manners and speech are noted afterward, and character last of all.”

Accordingly, Post marched her readers through the various types of dressers — the vulgarian, the unnoticeable, the sheep, and the greatest of all: The Woman Who Is Really Chic — as well as the proper dress for all settings. “Nothing so marks the ‘person who doesn’t know’ as inappropriate choice of clothes,” she wrote witheringly.

Etiquette was part of the great wave of civilities books that rolled out across America in the 19th and 20th centuries. They were essentially guides to upward mobility for the rising middle class, and to assimilation for newly arrived immigrants. As one scholar put it, etiquette books are “the leveling-up process of democracy.” They tell you exactly what the secret unspoken codes are and how to follow them.

But even in the precise, orderly world of these books, a problem lurked: What happens when not everyone agrees on what the codes are?

But by the time she published her second edition of Etiquette in 1927, she had begun to acknowledge that sometimes the host’s and guest’s ideas of appropriate attire might clash. As a cautionary tale, she provides readers with the case history of Mrs. Neighbor, invited to dine with Mrs. Worldly “very informally.” Mr. and Mrs. Neighbor arrive at the Worldlys’ duly underdressed — “he in a dinner coat, she in her simplest evening dress” — only to find “a dinner of fourteen people and every detail as formal as it is possible to make it.”

“In certain houses,” Post concluded, “formality is inevitable, no matter how informal may be her ‘will you dine informally’ intention.” (Dorothy Parker, who reviewed the 1927 edition of Etiquette for the New Yorker, took a different lesson from the anecdote. Mrs. Worldly, Parker opined, was quite the practical joker.)

Poor Mrs. Neighbor is the 1927 equivalent of a wedding guest who has been told that the dress code is “dressy casual” and shows up in a cotton floral sundress, only to find everyone else in suits and cocktail dresses. She is what happens when dress codes get ambiguous.

Today, it’s widely considered good form for hosts to clearly state the dress code they’d like their guests to follow (although the Emily Post Institute still doesn’t have a space for dress codes on its invitation templates).

“The traditional place to mention the dress code is the lower right-hand of the invitation,” Shelley Brown, senior fashion and beauty editor of the Knot, told Vox in an email. “Otherwise, you can list it on the details card with other pertinent information (hotel accommodations, etc.) if it’s not on the official invite.”

Brown said that specifying a dress code is an inclusive gesture that helps both guests and hosts. “And let’s be real,” she added, “the last thing you want to worry about while wedding planning is your friends or relatives showing up dressed inappropriately.” She suggested clear dress code definitions, possibly on separate cards inserted into the invitation. “Illustrations are even helpful!” she said.

We’ve started putting dress codes on invitations mostly because weddings today don’t have universal social codes the way they did in Post’s day. When Post was writing in the 1920s, she could instruct her readers to wear “elaborate day dresses” and call it a day. Now we have casual city hall weddings and formal black-tie weddings and city hall weddings where people wear black tie. The expectations are frequently unclear, so we ask hosts to make them clear.

In her 2018 book The Art of Gathering, event facilitator Priya Parker argued that this new practice is liberating. She described the change as the difference between Post-esque etiquette and what she calls “pop-up rules.”

“What could be less democratic than etiquette, which must be internalized for years before showing up at an event?” Parker wrote. “A rule requires no advance preparation.” Given a sufficiently clear dress code, you shouldn’t need to study the latest edition of Post’s classic tome to understand the nuances of a particular social group’s dress habits. You should just be able to throw something together and go.

And if the dress code is well-constructed, Parker argued, it will be a pleasure to follow it: “Rules can create an imaginary, transient world that is actually more playful than your everyday gathering. That is because everyone realizes that the rules are temporary and is, therefore, willing to obey them.”

Tara Isabella Burton, author of the novel Social Creature (and Vox’s former religion writer), hosts parties with such playful dress codes. She said the secret to ensuring that they feel like a game rather than a test is to be specific but not oppressively so.

Burton described one party she hosted. “It was a port-and-storytelling-themed party called Decanterbury Tales,” she said. Guests were instructed simply to “come in tails,” so some showed up in white tie, some showed up in animal tails, and some showed up covered in stories that they had printed out and cut into ribbons.

“The best dress codes are sufficiently open-ended enough that everyone can do their version and have fun, and not something that requires time and effort,” Burton explained.

Such dress codes can be a creative exercise, and as long as the rules are clear and the stakes are low, it will feel like a game. And because other people’s weddings ideally are low-stakes, even when the dress codes are muddy, it’s not really a big deal if you can’t figure out what to wear.

“Wedding dress codes are just like one big prank,” said Tam, who was invited to the “Connecticut casual” party. “If you care enough to stress, you’re probably fine.”

At places where dress codes are required, however, like school or work or professional events, they can turn exclusionary, no matter how clearly defined they are. As Alaina Leary wrote for Racked, many professional and even school dress codes punish those who can’t afford fancy power suits, as well as people from marginalized communities. “Some dress codes,” she wrote, “explicitly target hair for women of color or religious minorities, such as those who wear hijabs.”

To be truly joyous and celebratory — to fully embody the difference between Parker’s “pop-up rules” and Post’s etiquette — they should be low-stakes and carry no professional consequences. And they must be clear, no matter how inventive and playful they are.

Calkins, the librarian, said her friends seem to be taking that lesson to heart. She was recently invited to a wedding whose suggested dress code was even more curious than “wine country casual.” It was “George Clooney on a yacht.”

But this time, she said, it included a picture.

Why Vienna opera singers are ready to risk their lives to perform in a pandemic
6 winners and 3 losers from Succession’s best episode yet
Trump’s attempt to smear DACA recipients as “hardened criminals” is untethered from reality
Here’s the full list of 2020 Oscar nominees
The absurd whiteness of America’s court system, in 2 charts
16 states sue the Trump administration over national emergency declaration