“Definitely not”: Iran’s foreign ministry rejects the possibility of a meeting with Trump 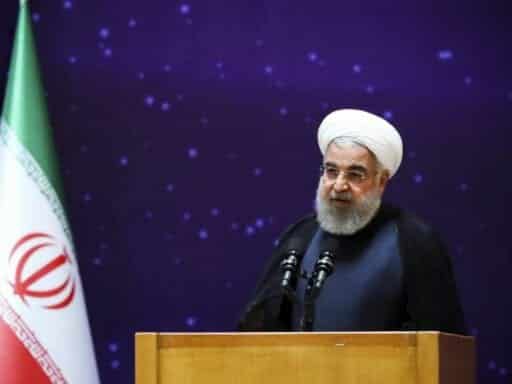 Trump said he would be willing to meet with Iran’s president. Iran isn’t interested.

Iran’s leaders are quite uninterested in sitting down for a chat with the American president anytime soon, it seems.

Just a week after threatening Iran with possible war, President Donald Trump said on Monday that he would be open to meeting with Iranian President Hassan Rouhani without preconditions.

“I’m ready to meet any time they want to,” Trump told reporters during a press conference with Italian Prime Minister Giuseppe Conte. “Speaking to other people, especially when you’re talking about potentials of war and death and famine,” he continued, “you meet.”

“With current America and these policies, there will definitely not be the possibility of dialogue and engagement, and the United States has shown that it is totally unreliable,” Qassemi said at a press conference in Tehran on Monday.

Trump responded with a pugnacious tweet in all caps:

The Iran nuclear agreement, formally called the Joint Comprehensive Plan of Action (JCPOA), was reached in 2015. Under the deal, a group of countries — the United States, the United Kingdom, France, Russia, China, Germany, and the European Union — agreed to lift crippling sanctions imposed on Iran’s nuclear program, giving the country greater access to the global economy.

In return, Iran agreed to take concrete steps to curb its nuclear program, limiting it to strictly peaceful applications, and to allow comprehensive inspections of key nuclear facilities by the International Atomic Energy Agency (IAEA) to ensure compliance.

It was one of the Obama administration’s signature foreign policy accomplishments — which is a big part of why Trump disliked it so much. He also disagreed with key provisions of the agreement, and frequently described it as “the worst deal ever.”

On May 8, Trump officially pulled the US out of the deal. Ever since, tensions between the two countries have been rising once again, culminating in Trump’s belligerent tweet to Iran.

Coming just a week later, Trump’s statement that he’d be willing to meet with Iran’s president without preconditions seemed like a welcome deescalation in rhetoric.

But Iran is having none of it.

“Given the current circumstances and hostile actions of the United States, the country’s withdrawal from the JCPOA and continuation of hostile policies, its efforts to put economic pressure on the Iranian people and its sanctions, I think there are no conditions for such a discussion at all,” Qassemi said.

And on Tuesday, Iran’s Foreign Minister Mohammad Javad Zarif tweeted that the US “can only blame itself” for withdrawing from the nuclear deal.

Iran & US had 2 yrs of talks. With EU/E3+Russia+China, we produced a unique multilateral accord—the JCPOA. It’s been working. US can only blame itself for pulling out & leaving the table. Threats, sanctions & PR stunts won’t work. Try respect: for Iranians & for int’l commitments

Facebook’s political ads policy is predictably turning out to be a disaster
Iran, China, and war: Foreign policy topics to watch for in the January debate
Amazon’s new area of domination: its own package delivery
Climate change is making Australia’s weird weather even weirder
Live results for the March 10 primaries
Mike Bloomberg is a disaster