Demi Lovato has always been honest about recovery and relapse. It’s why her fans love her. 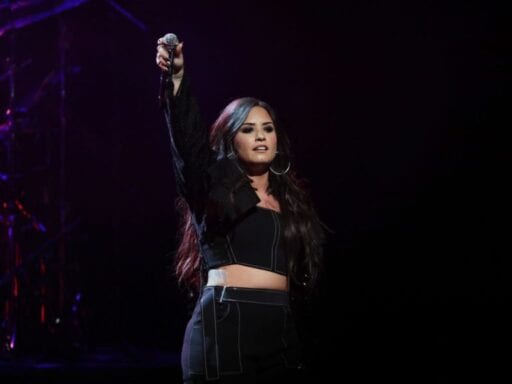 Grammy-nominated pop star Demi Lovato was hospitalized this week after a rumored drug overdose, though the specifics of the situation remain unknown. Per a statement released by Lovato’s representative, the singer — who has spoken candidly in the past about her struggles with substance abuse and mental health — is now “awake and with her family.” While she recovers, many of her supporters have been speaking out online out about how deeply she inspires them.

Immediately after the news of Lovato’s hospitalization broke on Tuesday, fans began sharing stories on Twitter under the hashtag #HowDemiHasHelpedMe. “When I was at the worst part of my life and I just wanted to give up completely, Demi’s speeches and music and book just kept me going and helped me be able to finally ask for help,” wrote one. “I just recently passed 5 years clean and I credit that partially to her.”

“Demi Lovato is a good role model, and her struggles with addiction don’t change that,” wrote Arkee E. for the Condé Nast website Them.

“Demi herself has done so much to encourage more and more people to come forward and share their stories,” wrote Lainey Gossip, “to get help, and to be kinder to themselves and to others who may be experiencing the same.”

While there are certainly some negative comments out there, by and large, the overwhelming narrative of Lovato’s apparent overdose is one of support and admiration.

That’s not something you can typically count on when a celebrity struggles with addiction. In 2009, when Grammy-winning singer-songwriter Amy Winehouse was hospitalized two years before her death, after her problems with drugs and alcohol had become well known, the gossip blog Oh No They Didn’t ran the news with an unflattering picture of a strung-out-looking Winehouse at the top and much disgust from commenters at the bottom.

“She has no one to blame for the situation she is in but herself,” said one. “Say all you want about her husband (I am sure he is a dick) but no one forced her to do drugs in the first place, I sure he may have put pressure on her but ultimately it was her choice.”

“this to infinity i am sick of her ~drama~” responded another.

For Lovato’s fans, however, the so-called “~drama~” isn’t a dealbreaker. That’s because Lovato has consistently been open and transparent about her experience with addiction and mental illness, working to remove the stigma from acknowledging problems with mental health and addiction and making it easier for people to get help. As a result, she’s made resilience and recovery an essential part of her image.

Throughout her career, Lovato has emphasized the idea that recovery is a process

Lovato first entered a treatment facility for an eating disorder, self-harm, and Adderall abuse in 2010, when she was 18 years old and in the midst of touring with the Jonas Brothers to promote the Disney Channel’s Camp Rock 2.

She was a Disney girl at that phase of her career, and as such she was supposed to be a squeaky clean role model — with the silent expectation that if she did eventually go off the rails into a titillating and scandalous trainwreck like Britney Spears did before her, it would only happen after she’d left Disney’s controlling embrace. If Lovato was in rehab, the traditional Disney script dictated that she get it over quickly, then return to work as a new and improved woman.

Instead, Lovato made an MTV documentary about her recovery. The result — 2012’s Stay Strong — has a slight whiff of corporate compromise to it, with Lovato repeatedly assuring her fans that she was sober, even though she would later reveal that she was on cocaine during filming. But it also heavily spotlights Lovato repeating over and over that her recovery is always a work in progress.

Lovato’s mission, she explains over the course of Stay Strong, is to use her platform to raise awareness of mental illness and addiction and eating disorders. The camera cuts to a montage of Lovato’s fans explaining what she means to them, and one after another they repeat, “If she can do it, I can do it.”

“I definitely wasn’t given this voice just to sing,” Lovato concludes, vowing that she’ll use her talent to inspire others to reach out for help when they need it, and to emphasize that they can survive their addictions, even with the knowledge that relapses may occur again and again.

It’s a message she would return to in her 2017 YouTube documentary, Simply Complicated, in which she candidly discusses her experiences with drugs — including the time she punched a backup dancer in the face — and how she felt after relapsing into her eating disorder in the wake of a breakup. “The less I have to think about food, the easier it is for me to go about having a normal life,” she says. “And I don’t want to let anybody down. So when I do have moments when I slip up, I feel very ashamed.”

Pop star documentaries exist for pop stars to tell stories about themselves, and the story Lovato tells in hers is that she is in recovery, and that her recovery is an ongoing process, one with relapses and setbacks.

So when Lovato released her new single “Sober” last month, singing, “Mama, I’m so sorry, I’m not sober anymore,” her fans understood. Relapsing was a step backward, but Lovato had been there before, and would make an effort to get better. She was resilient. And in fact, that was the note the song ended on: “I promise I’ll get help / It wasn’t my intention,” Lovato assures her listeners.

In the context of this narrative, Lovato’s apparent overdose is scary and saddening, but it is not the stuff of salacious scandal, and it isn’t being met with eye rolls and dismissive talk of “the ~drama~.” Instead, the overdose becomes a part of the process of her recovery, which is a story that her fans know intimately and that has inspired many of them through their own recoveries.

The news is part of the story of what makes Lovato both relatable and aspirational: She has been through terrible pain and darkness, but she has risen out of it to become a superstar, while acknowledging that her recovery hasn’t been easy and will continue forever. “If she can do it, then so can I.” It becomes not a moral failing, but part of the story of Demi Lovato, who is resilient.

Forth Worth officer charged with murder in killing of black woman in her own home
Live results for Mississippi’s governor’s race: Jim Hood vs. Tate Reeves
An actor confronted Harvey Weinstein at a comedy show. Guess who got thrown out?
Getting to 100% renewables requires cheap energy storage. But how cheap?
Emma, The Hunt, and The Invisible Man will be digitally available soon
Grassley gives Ford more time to decide on Senate testimony about Kavanaugh sexual assault allegatio...