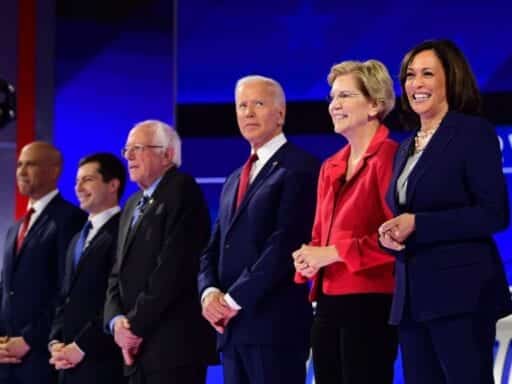 Here’s what to expect from the forum.

MSNBC, along with gun control advocacy groups March for Our Lives and Giffords, will host a six-hour gun violence forum with the 10 leading 2020 Democratic presidential candidates on Wednesday, starting at 10 am Pacific time.

You can live stream the forum at NBC News Now or MSNBC.com, which won’t require a cable login. Parts of it will also air on MSNBC.

Here’s the schedule for each candidate:

The audience will be made up of 300 people who obtained tickets. MSNBC Live anchor Craig Melvin will field most of the questions, but some will also come from Giffords and March for Our Lives, asked by gun violence survivors and policy advocates.

As mass shootings like El Paso, Texas, and Dayton, Ohio, have received more attention, gun violence and policy have become more central to the 2020 campaigns. Before the debates, Democratic survey respondents put gun violence as one of the top issues they want to hear about. There were nearly 40,000 gun deaths in the US in 2017.

For much of the past 25 years, Democrats have typically responded to these issues with calls for universal background checks, an assault weapons ban, and better enforcement of existing gun laws.

But there’s a growing push for Democrats to go further. March for Our Lives released a “Peace Plan” that backs, on top of the Democratic mainstays, a requirement to obtain a license to buy and own a firearm as well as a mandatory buyback program — effectively, confiscation — for assault weapons. And a growing body of research suggests universal background checks and an assault weapons ban by themselves wouldn’t do much to reduce gun violence, while licensing would make a more serious impact on gun deaths.

Some Democrats have answered the demands with more aggressive gun policy platforms. Booker led the charge with a plan that includes licensing. Warren released a plan including licensing that promises to revisit the issue of guns annually, with an explicit goal of getting gun deaths down 80 percent. Buttigieg, Yang, and others have released similar proposals.

Meanwhile, O’Rourke drew days of national media attention when, at the last debate, he said he wanted to not just ban assault weapons but also confiscate the firearms from gun owners: “Hell yes, we’re going to take your AR-15, your AK-47.” He wasn’t the first to call for this — Rep. Eric Swalwell of California did when he was in the race, and Booker supports the idea — but he was perhaps the loudest to do so.

Not everyone has joined the call for bolder action. Biden, for one, has generally stuck to supporting universal background checks and an assault weapons ban — the same kinds of policy proposals he has been making on guns for 25 years, since as senator he helped pass federal background checks and a 10-year assault weapons ban in the 1990s. He’s criticized licensing, saying it “will not change whether or not people buy what weapons — what kinds of weapons they can buy, where they can use them, how they can store them.”

Given that the forum will follow a one-by-one interview format with the candidates, instead of a debate-style matchup, the candidates themselves won’t be able to confront each other on their differing views on licensing, confiscation, and so on. But perhaps Melvin and other questioners will; March for Our Lives in particular has been trying to get the 2020 candidates to back its “Peace Plan,” which would require a commitment to supporting gun licensing and a mandatory buyback for assault weapons.

Alternatively, the candidates could face questions about what else, besides gun control, they’re willing to do about gun violence. Some activists, including Giffords, have become more involved in urban violence reduction strategies in recent years.

But if nothing else, Wednesday’s forum will give the public a chance to see just how far the Democratic candidates are willing to go on guns.

For more on the 2020 candidates’ positions on guns, read Vox’s explainer.